The growing business of religion in India

With Prime Minister Narendra Modi and President Pranab Mukherjee visiting the holy shrines at Kedarnath and Badrinath in Uttarakhand earlier this month, chief minister Trivendra Singh Rawat is optimistic about the state’s prospects in the new tourist season. How popular is religious tourism among Indians? Does religion or class affect the probability of people undertaking pilgrimages?

Studies conducted by Lokniti at the Delhi-based Centre for Study of Developing Societies (CSDS) help us answer such questions. The studies show that nearly one in two Indians plan to undertake religious tourism in the next two years and a bigger number reported doing so in the past two years.

A study conducted by Lokniti on Religious attitudes, behaviour and practices in 2015 shows that a significant section of the population in all major religious groups in India reported having undertaken religious tourism over the past two years. Religious tourism is defined as going for a pilgrimage and it may or may not involve an overnight stay. There was significant inter-religious variation in prevalence of religious tourism though, with the figure being around three-fourth for Sikhs and one-third for Muslims and Christians. Does class play a role in people undertaking religious tourism? Among Hindus, class does not seem to have any influence on religious tourism, but among Muslims, lower classes seem to have a slightly higher probability of undertaking pilgrimages. The results are based on Lokniti’s multi-dimensional economic class index which takes into account income, asset ownership, place of residence and occupation. Given the rise in religiosity in the country, going for pilgrimages may increase in times to come. The same study also shows that more than 25% Indians reported having become more religious over the past 4-5 years. The trend is valid across religions and in keeping with other attitudinal surveys. Between 2007 and 2015, the share of respondents in India who perceived religion to be very important increased by 11 percentage points to 80%, according to the Pew Global Attitude surveys. Religious places are ranked high in preferred tourist destinations for Indians, according to the State of Nation Study conducted by Lokniti in 2008, which found that 39% of the respondents reported pilgrimages/holy sites as their most preferred location for a vacation.

These findings, however, are slightly different from a National Sample Survey Office (NSSO) report on domestic tourism for 2008-09. The report found that social purposes accounted for almost three-fourth of all overnight trips, while pilgrimages and religious trips accounted for only around one in 10 such trips in the year preceding the survey. Although the NSSO released a similar report in 2014-15, it can’t be compared with the Lokniti findings as NSSO figures are based on response for the last 30 days, against Lokniti’s period of past two years.

Nonetheless, the NSSO report does show that average expenditure on religious trips has more than doubled during this period, and it is ranked second in terms of average number of persons per household who go on such trips. 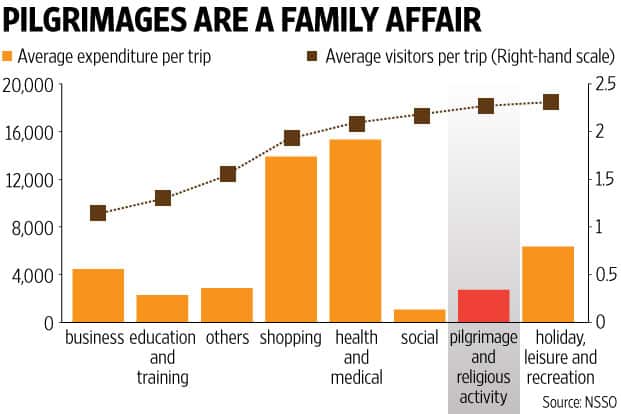 The broad trends seem to suggest that religious tourism should be accorded priority in India’s tourism policy.

This story is based on survey data shared exclusively with Mint. Pranav Gupta is a researcher with Lokniti CSDS and Sanjay Kumar is professor and currently director of CSDS