Bengaluru: Karnataka chief minister H.D. Kumaraswamy on Thursday announced a ₹ 34,000 crore farm loan waiver in the state budget, to be spread over four years and as many stages, covering farmers who had defaulted on loan payments till 31 December 2017.

The Janata Dal (Secular), or JD(S) election manifesto had promised to write off ₹ 53,000 crore of agricultural debt.

The waiver this year would amount to ₹ 10,500 crore and all farmers, even those whose debts are yet to be waived, will get “debt-free certificates" to help them raise fresh credit. 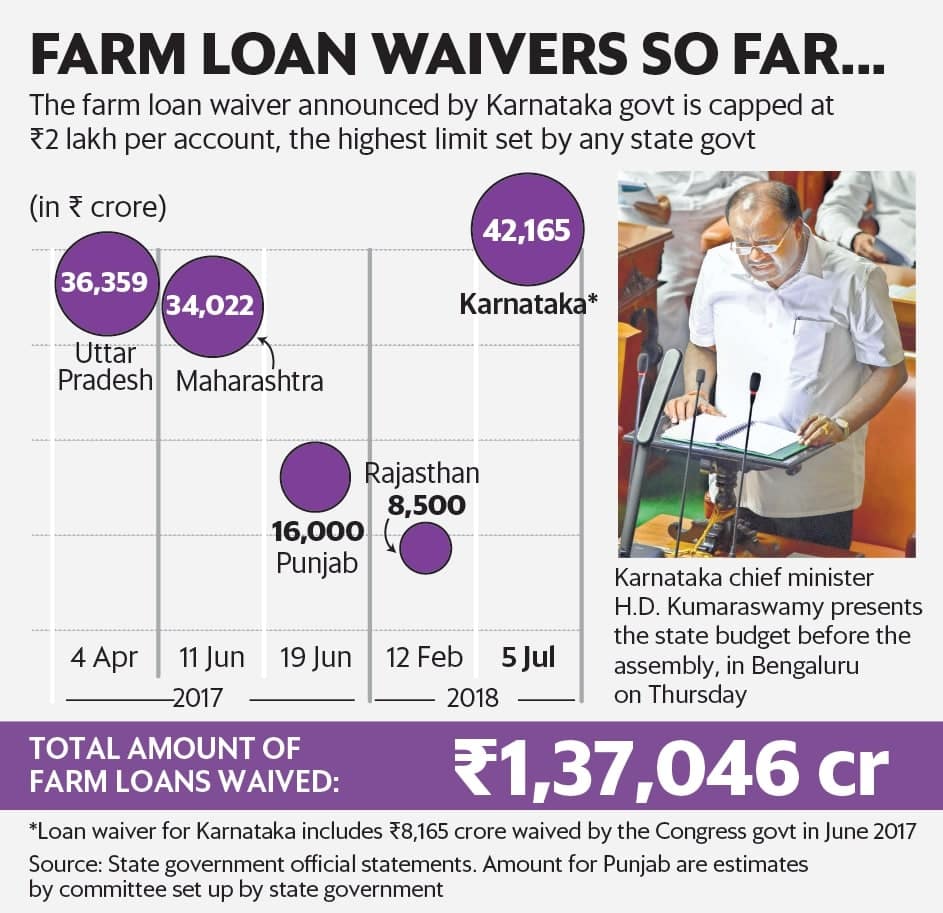 “I have decided to waive off all defaulted crop loans of the farmers made up to 31 December 2017 in the first stage," Kumaraswamy said in his budget speech.

The limit was capped at ₹ 2 lakh for every family, which includes the farmer, spouse and dependent children. This is the highest limit for farm loan waivers by state governments, with Uttar Pradesh following at ₹ 1 lakh per farmer.

The total written off loan amounts to ₹ 30,266 crore and would benefit 1.732 million farmers, the waiver guidelines show.

The budget also allocated ₹ 6,893 crore or ₹ 25,000 back to the farmers’ accounts, as an incentive for non-defaulting farmers, taking the total package to ₹ 37,159 crore benefiting 4.489 million farmers.

The farm loan waiver seems to have been announced with the motive of wooing the farming community ahead of the 2019 Lok Sabha elections, in which the JD(S) and Congress have decided to jointly take on Prime Minister Narendra Modi-led Bharatiya Janata Party (BJP).

The decision of Kumaraswamy to continue all schemes of the Siddaramaiah-led government as well as present his budget in addition to the one presented by his predecessor, gives an upper hand in the coalition government to Siddaramaiah, who is often referred to as “super CM".

The loan waiver guidelines add that ₹ 3,193 crore of the ₹ 8,165 crore waiver scheme announced by the previous government in July last year would be released.

The farm loan waiver announcement comes a day after the National Democratic Alliance (NDA) government raised the minimum support price (MSP) of kharif crops, which was part of its programme to double farmers’ income by 2022.

With crucial elections later this year in agrarian states such as Madhya Pradesh, Chhattisgarh and Rajasthan, and the general elections in May 2019, the move of the Union government could potentially mitigate the political damage for incumbent regimes because of the prolonged phase of farm distress.

The 63-page budget document, however, seemed to have been written in a hurry, with no estimates or project details, or even a vision document for the coalition government’s five-year term. It also did not give any detail of the ₹ 1.25 trillion irrigation project, or set budgetary allocations for building 2 million homes or creating 10 million new jobs over the next five years, which were approved by the coordination and monitoring committee as part of the common minimum programme.

The chief minister added that other election manifesto programmes including the Rs6,000 pension for senior citizens would be given at a later time.

Kumaraswamy said that the coalition government would continue all schemes of the previous government as well as the budget presented by his predecessor in February.

To provide for the farm loan waiver, the chief minister decided to increase state taxes on petrol from 30% to 32%, and on diesel from 19% to 21%, but it remains to be seen if there are any budgetary cuts to other sectors, as Kumaraswamy did not provide estimates to any of the sectors in his speech.

Though the budget provided for an additional ₹ 9,307 crore as state expenses for the year, over and above the ₹ 2,09,181 crore set by Siddaramaiah in February.

“It appears to be a hurried supplementary budget," Narendar Pani, Political analyst and faculty at the National Institute of Advanced Studies (NIAS) said.

B.S.Yeddyurappa, former CM and BJP’s leader of opposition in the assembly called the budget a betrayal of the farmers trust.

“This is the budget of two brothers; by announcing schemes specific to their strongholds, the chief minister has insulted the people of the state," he said while seeking to know the provision made for the ₹ 34,000 crore waiver. Calling it an ‘anti-people budget’, he said that it was harsh on the poor and middle class.