New Delhi: Chief minister Sheila Dikshit’s 10-year track record helped the Congress party win power in Delhi for a third straight term on Monday, in a triumph over the Bharatiya Janata Party (BJP)’s claim of being India’s vanguard in the fight against terrorism.

“This is the victory of development; people vote for development," the 70-year-old Dikshit said amid celebrations at her residence.

Dikshit became the face of progress within the Congress after her government won credit for the construction of the Delhi Metro, for bringing air-conditioned buses on to the capital’s roads and introducing a Bhagidari (partnership) programme that enabled citizens to participate in the planning of development projects. 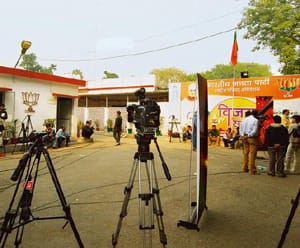 Vijay Kumar Malhotra, who the BJP had projected as its chief minister-designate, also won, but that was poor consolation for a party that had banked on returning to power by portraying itself as a bulwark against terrorism. Delhi voted on 29 November, three days after terrorists attacked Mumbai.

Dikshit and all six of her cabinet colleagues were among the winners, with the chief minister defeating BJP’s Vijay Jolly by a margin of 14,078 votes in her constituency.

“I voted to show that I was not afraid of the terrorists but I cast it in favour of the Congress as they have brought development to the city," said Rakesh Kumar Gupta, 35, a fruit vendor in the Connaught Place shopping district.“Moreover, the BJP do not seem to have any development agenda of their own and they only keep raking up the terror threat."

The Congress, however, lost five seats compared with the last assembly elections, while the BJP gained three.

In 2003, the Congress had won 47 seats out of 70 and the BJP 20, leaving a seat each for the Nationalist Congress Party, the Janata Dal (Secular) and an independent candidate.

Jaitley, a BJP general secretary and head of party affairs in the Capital, said, “Delhi is a setback and I take full responsibility. This is a Congress win and more importantly Sheila Dikshit’s win."

Delhi saw close to 60% polling, considered a high turnout for the Capital. The Mumbai terror attacks, which left at least 183 people dead, followed bomb blasts in other cities including Delhi, where on 13 September five explosions killed 30 people.

The BJP had consistently attacked the Congress party for being “soft on terror" during the election campaign. The party even issued advertisements a day after the Mumbai attacks accusing the Congress government of being weak and asking people to vote the BJP to fight terror.

Autorickshaw driver M.S. Bajaj said he voted the BJP because he was convinced the Congress was incapable of dealing with terrorism. He was also angry because his brother-in-law had to close his shop in the city’s Karol Bagh area after it was sealed during a drive against illegal buildings, which Dikshit has defended saying it was done on court orders.

“How could the government be so callous that it snatches the source of livelihood of people?" asked the 62-year-old.

Such discontent, however, couldn’t influence the ultimate outcome of the elections.

Nayeem Khan, a parking lot attendant in his mid-40s, said the BJP had played the terror card to win votes during elections. “Some bad fish are dirtying the pond and causing trouble for all Muslims in the country. But the BJP’s game of politicizing terror attacks was too blatant," said Khan, who voted for the Congress.

Dikshit had listed one achievement after another for her government—from privatization of power supply to construction of the Metro and building of schools and hospitals— during a recent interview with Mint. She added that when it came to development in Delhi, “...it is there for everybody to see."

“The people, especially middle class, view Sheila Dikshit as a dynamic chief minister," said Bidyut Chakrabarty, professor of political science at Delhi University, adding that her proximity to the Congress-led coalition government at the Centre had “helped her get things done quickly."

Dikshit, he said, had “redefined the character of the state."