Mumbai: More than a year after India’s biggest container port—located at Navi Mumbai, or New Bombay—called for bids and received more than 41 responses from local and foreign firms seeking to build a new container terminal at a cost of Rs7,000 crore, the project remains stuck. 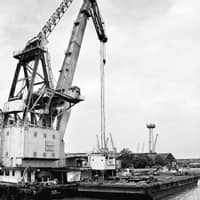 All at sea: A container terminal at JN Port. Lack of preparedness is seen partly to blame for delayed projects

According to credit rating firm Crisil Ltd, India spends 4.6% of its gross domestic product on infrastructure. This needs to be raised to around 8% to sustain a GDP growth rate of more than 9%, Crisil said. The firm estimates that the gap in infrastructure spending is holding back India’s economic growth by 1.5-2 percentage points every year.

Procedural delays are the main reason for this. Despite the response to the container terminal project, and despite the fact that large Indian conglomerates such as Reliance Industries Ltd and the Tata group bid for the project, it has virtually remained a non-starter.

Around 95% of India’s trade by volume and 70% by value is transported by sea.The initial enthusiasm for the project that is designed to handle 4.4 million twenty-foot containers a year, has since waned.

Companies in the business of transporting cargo said delays in implementing such projects would affect economic growth.

“The projects connecting ports or airports to the hinterland need to be integrated with other infrastructure projects. The road, rail, ports and airports projects need to be transparent and should foresee the projected growth," said S.R.L. Narasimhan, secretary general, Western India Shippers’ Association (WISA), an industry body.

“The delay in these critical projects would reduce the investments in transport sector and thereby lower the efficiency of the economy. In simple terms, India cannot lose competitiveness in the global market due to high logistics costs," said an industry expert who did not wish to be identified.

Another expert said the overall amount spent on logistics, or moving goods, was higher than in other countries. “Logistics cost in India is 13-15% of the GDP compared with 8% in developed countries. The more you pay for logistics, the less competitive you are both in India and outside," said M.P. Pinto, former secretary, ministry of shipping, at a recent conference.

With a growth rate in excess of 20% a year, India’s biggest container port JN Port will reach full capacity by June 2008, said people in the shipping business. “By June 2008, JN Port will reach the maximum capacity of 4.3 million twenty-foot containers. From then on, there will be congestion. Ideally, the fourth container handling terminal should have been ready by now," said Sujeet Singh, general manager, operations at the Nhava Sheva International Container Terminal Pvt. Ltd, run by the Dubai government owned DP World at JN Port.

JN Port currently has three container handling terminals with each handling an average of more than 100,000 twenty-foot containers a month; the port is expected to close this year with a traffic of 3.6 million containers.

A Rs900 crore project to deepen the channel of JN Port to allow bigger container ships call for unloading and loading cargo is also stuck in the shipping ministry.

“The idea is to divert more traffic from road to rail," said the government official. Currently, 60% of the cargo is moved by road and the rest by rail. With the dedicated freight corridors, the ratio will change to an even 50:50.

Road projects are also moving at the same pace. The National Highways Authority of India (NHAI), which is implementing the ambitious National Highways Development Project (NHDP), admits there has been a slowdown in implementing highway projects through the public-private participation route. Since April this year, NHAI has submitted 14 highway projects totalling 1,231km to the ministry of road transport and highways for further submission to the public-private-partnership appraisal committee (PPP-AC) for clearance to start the bidding process.

The ministry has, in turn, submitted 12 of these 14 projects to the PPP-AC. “So far, we have not received approval for a single project," said an NHAI official who did not want to be named because he is not authorized to speak to the media.

Some of these are big projects: the 120km Hyderabad-Vijayawada project in Andhra Pradesh, the 97km Madhya Pradesh Border-Dhule project and the 60km Pimpalgaon to Nasik project in Maharashtra.

The second airport in Mumbai is also likely to be delayed. Although civil aviation minister Praful Patel has previously said the project would be complete by 2011-12, the agency in charge of the project admitted that it was a tough deadline to meet. It reckoned that the airport would be ready only by mid-2013.

City and Industrial Development Corporation of Maharashtra Ltd (Cidco) is the nodal agency for implementing the Navi Mumbai airport.

“The government has everything in place including resources to execute these projects. What they lack is only preparedness. Any major delay in these projects will give a wrong signals to investors including international players," said a Mumbai-based analyst who tracks the transport sector, asking that he not be named.