They built this city, Shenzhen 40 years after

A tech hub that works at 'Shenzhen speed', this coastal city in China is the poster child of Deng Xiaoping's 'Reform and Opening Up'

Shenzhen: Standing at the top of the Lianhuashan Park in Shenzhen, I try to capture a panorama shot of the city’s skyline. It is impossible. There are too many people—hundreds—with the same idea, jostling with me. We all raise our phones as high up as we can, to avoid the rows in front of us, and slowly pan left to right, unfolding an architectural polyptych fluorescent with illumination.

The walk to the peak had been a sweaty stroll, the gradient sufficient to exhaust my breath by the time I reached the sprawling observation deck, the ‘Deng Xiaoping Square’. Everyone else seems fitter than me, or, perhaps, they are simply more eager. There are grandmothers with walking sticks, young parents with infants strapped to their chest, old men in wheelchairs. They all walk (or wheel) briskly, with ardent feeling, as if this were a pilgrim route.

A plaque at one of the entrances to the park had promised that the climb is worth it. “Best place for visitors," it declared, “to honour the great man and ascend to admire the beauty of the city." The “great man" is, of course, Deng Xiaoping, the man who transformed China, rescuing it from the ravages of Mao Zedong’s famine, fear and fealty. His images are strewn all around the city, but here at the summit of the Lianhuashan Park, where Deng is brought to life in a vivid bronze statue six metres tall, striding purposefully forward, you can see his handiwork in the “beauty of the city" around you.

Shenzhen, a coastal city in China’s Guangdong province, has more skyscrapers than Singapore and this month they have all been pulled in to play parts in a spectacular light show; the throngs I encounter atop Lianhuashan are thicker for this reason. It’s to celebrate the 40th anniversary of “Reform and Opening Up", the profound policy shift ushered in by Deng Xiaoping in December 1978 that turned around China’s fortunes and laid the foundation for its present prosperity. Each high-rise on the horizon is a concrete milestone in the city’s journey, their vertical growth an index of the growing ambitions of the city—and the country.

It is a skyline that would be impressive anywhere in the world, but it is extraordinary for being in Shenzhen. When Deng was formulating his turn away from Mao’s economic policies, Shenzhen was still a place of paddy fields and fisher folk, a ragamuffin river town of some thirty thousand people hanging onto the edges of Hong Kong, the swinging big city across the bay. Shenzhen’s makeover began only in 1980, when it became one of four locations to be designated as a Special Economic Zone, where private enterprises could do business without any fetters—an idea unheard of in Communist China.

It was an experiment. The plan was for Shenzhen to serve as a poor man’s manufacturing hub, pulling factories that found Hong Kong too expensive. It was to be a place where raw materials could be imported without restriction and finished goods exported without any tariffs. Land was abundant and the labour would arrive from the countryside—in fact, Deng hoped that Shenzhen would help stem the exodus of unemployed young men to then British-held Hong Kong.

In 2017, Shenzhen nearly overtook Hong Kong’s gross domestic product (GDP). It is Shenzhen that is now the shiny one, while Hong Kong reeks of decrepitude, its streets grimy and its infrastructure begging for repair. Shenzhen routinely beats Hong Kong on city competitiveness rankings; in 2018, practically every study that compares Chinese cities with each other on everything from economic growth to urban sustainability, ranked Shenzhen at the top of the class, comfortably edging out Hong Kong, Shanghai, Beijing, and Guangzhou, the traditional heavyweights. Indeed, Shenzhen’s competition is no longer local; it now benchmarks itself to Singapore and San Francisco. 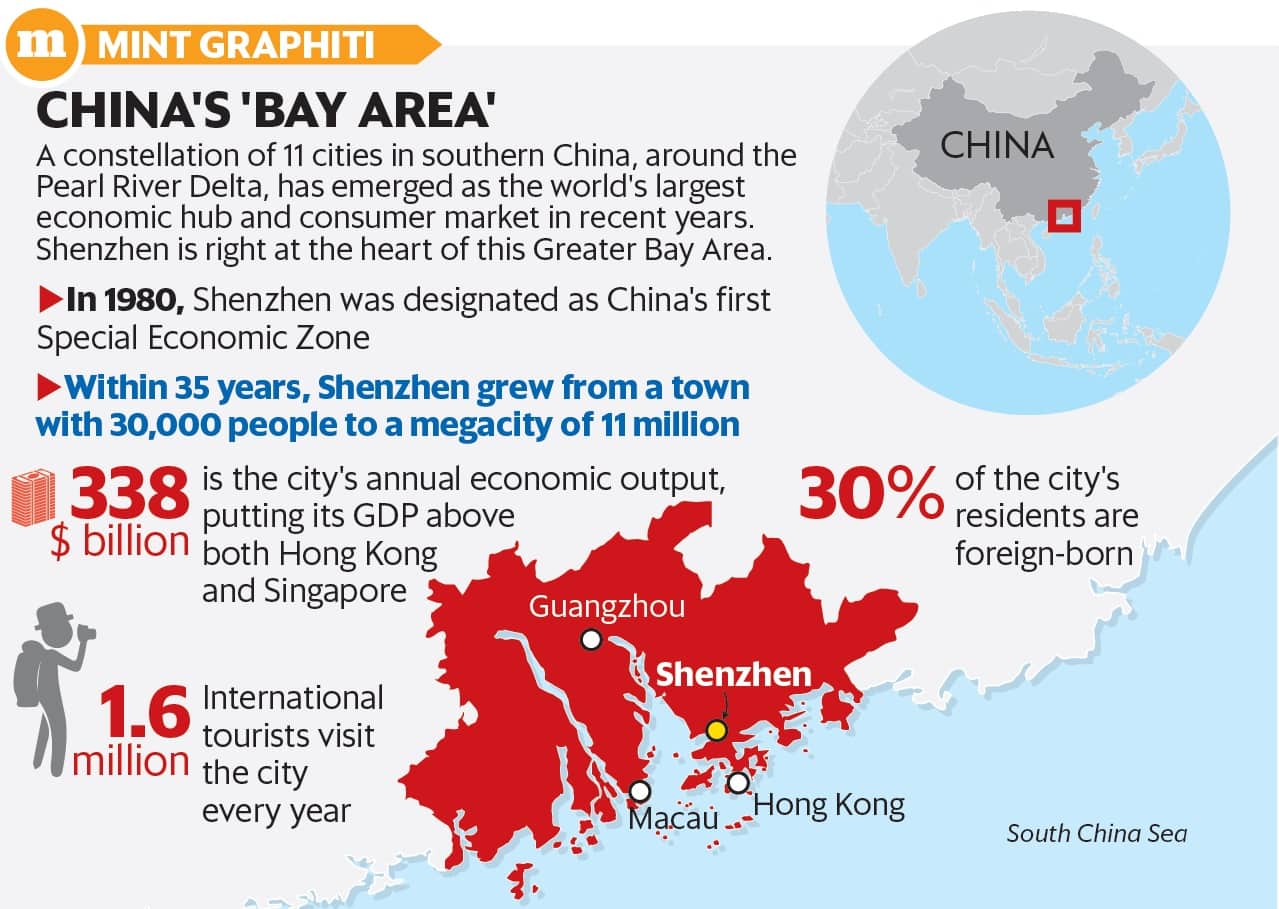 It is an astonishing achievement, and an unlikely vision of a Chinese city. Despite what has been reality for some time now, the image of an industrial city in China has remained that of smoky factories and smoggy skies, cheap labour and counterfeit goods. It’s an outdated image but the impact of that realization, I found, hits you hardest in a city like Shenzhen. I was visiting in the middle of October and the autumnal temperatures lay comfortably on the skin of the city, which, despite its built-up urbanity, is surprisingly green. Lianhuashan Park aside, which sits in the middle of the city like a lung, the surrounding Futian CBD area is dotted with serene gardens and rippling lakes, each a lush haven of recreation and exercise in the middle of a busy day.

In comparison to other tier-I cities in China, or, Indian ones for that matter, Shenzhen’s air is a relief. The sky is still blue, and you can indeed stop to smell the peonies without choking on particulate matter. Part of it is an aggressive drive to turn the city’s public transport electric. Shenzhen has managed to electrify 100% of its public buses, a fleet that is larger than those operating in London, Los Angeles, Toronto, New Jersey and Chicago, combined. It’s not only the buses—the number of the blue-coloured BYD taxis zipping about the city with the barest hum seems to grow every day. Between the fiercely efficient Shenzhen Metro, the electric buses and taxis, and the ubiquitous hordes of smart bicycles available for ride-sharing, Shenzhen is now quieter and cleaner than any 12 million population urban centre in China.

The shift to a technology hub

But the bigger reason for this sunshine and butterflies vibe is Shenzhen’s shift from a factory floor to a hub of advanced technology. In the first decade after Reform and Opening Up, Shenzhen was very much the stereotypical industrial city brown with factories, its mountains and villages levelled by construction. In the decades after, it transitioned to higher-end manufacturing, particularly phones and chips, made famous by the electronics markets in Huaqiangbei that sold ‘genuine fakes’ and second-hand phones refurbished to look as good as new. With the dot-com era came a new wave of software companies, but even then it was less Silicon Valley and more a haphazard mushrooming of scrappy internet companies that resembled our own jugaadu outfits.

But beneath all these crude attempts, a rich stew of new capabilities was simmering and bubbling, waiting to spill and wash over China’s tech landscape. That moment came in 2014 when the government declared a push for “mass innovation and mass entrepreneurship". Overnight almost, China became a hotbed of start-ups, millions of them, chasing the latest innovation in artificial intelligence (AI), robotics and Internet of Things (IoT), each of them scrambling to build the next big online-to-offline/online-merge-offline businesses.

Shenzhen’s history as a hardware champion meant it was blessed with an extremely dynamic ecosystem of component manufacturers and tightly knit supply chains. This gave it the kind of rapid prototyping capabilities that these start-ups needed. The explosive growth of tech and telecom behemoths like Tencent, Huawei, BYD, and OnePlus, and the drone-maker DJI, all of whom started out in Shenzhen and are headquartered there, also contributed to an incubator mindset. Hundreds of so-called “accelerators" now nurture and support new ventures as they expand and become lustrously IPO (initial public offering)-attractive.

The Shenzhen city government, too, has pulled its weight and thrown enormous resources to incentivize innovation. It is the reason why, according to the investment bank Mizuho, Shenzhen attracts more hardware and robot-related start-ups than any other city in China, including companies like UBTECH Robotics, the world’s most valuable AI start-up, and Makeblock, a DIY robotics-for-kids company that currently has 6 million users across 140 countries and is used in thousands of schools globally. As Kai-Fu Lee, one of the world’s leading AI venture capitalists, writes in his book AI Superpowers, for hardware entrepreneurs, a week spent working in Shenzhen is equivalent to a month in the US, for you can go from drawing board to prototyping in one day and reiterate it over and over for very little cost. There is even a word for it: “Shenzen Speed".

The same feverish energies that give Shenzhen its inventive edge and draw comparisons with Silicon Valley, also give it hipster airs and a cosmopolitan sophistication. As I walked around Nanshan, a new-ish tech district that is home to over half a million start-ups, a dozen unicorns, and the offices of Baidu, Alibaba, Tencent—the Chinese tech trifecta that rules the country’s internet universe—I found the sidewalks and the street-side cafes filled with laptop-toting earphone-strapped young men and women who can only be described as members of the global hoodie generation.

Shenzhen is a young city and its millennial manners are given full reign in the city’s QR coded, hyper-digital “smartness" that makes the city feel like the future. When Lonely Planet picked Shenzhen as a “top city" to visit in 2019, ranking it number two globally, it described it as “China’s most innovative city" and commended its “strumming indie-music scene", “cool cafes", “craft brewers", and its vibrant “arts district risen from the remains of former warehouses".

Even the “older" CBD area of Futian is trying to keep up—and succeeding. At the heart of it is the Civic Center, a place accented with fabulous architectural flourishes. Next to it is the Arata Isozaki-designed Shenzhen Library and Concert Hall, its pyramidal contours and sky-lit interiors forming a centrepiece of the city’s determination to be good looking—a determination that goes far beyond tall buildings that light up the night sky. Shenzhen was the first city in China to be designated a Unesco city of design, recognition of the city’s bustling creative industries that are making a dent globally in everything from fashion to graphic design, toys to interior design.

This artisanal spirit was on full display when I visited. It was the week Maker Faire was on, a global festival for “makers" of things. Hosted over a weekend at the port-side district of Shekou, the Faire drew thick crowds, including large contingents of enthusiastic school kids, who studied, photographed, admired and played with novelty innovations. None of it was very significant but it suffused the Sunday afternoon with the joys and satisfactions of learning by doing. Would any of these “makers" go on to found unicorns? Who knows—what’s important is that it was fun.

Deng Xiaoping’s Reform and Opening Up looms large over all of China—a China that sees itself as the rightful leader of the world, a more significant power than the US—but Shenzhen is its poster child, a city that he handcrafted. It is also Shenzhen that captures most poignantly the paradox of Chinese growth, which has come often at significant costs to those who are as yet untouched by the benefits of a highly urbanized modern city but must make way for its construction, chronicled with satire (but also empathy) in novels such Yan Lianke’s The Explosion Chronicles.

As Chinese President Xi Jinping embarks on an ambitious agenda to usher in a “New Era" of his own and attempts to inch taller than even Deng Xiaoping, commissioning new megapolises like “Xiongan New Area", a showcase city for technological progress and environmental sustainability, the test will be if he can pay a smaller price for such transformation.

Abhijit Dutta is the author of Myanmar in the World: Journeys through a Changing Burma.