‘If Anil Ambani does something wrong, I’ll raise that issue as well’

New Delhi: Samajwadi Party (SP) general secretary Amar Singh, a confidant of party chief Mulayam Singh Yadav and a friend of Bollywood icon Amitabh Bhachchan and billionaire industrialist Anil Ambani, has accused top officials of the power and oil ministries of promoting the interests of Anil’s estranged older brother Mukesh Ambani’s Reliance Industries Ltd (RIL) in a gas supply case. He went to the extent of writing a letter to the Parliamentary Committee on Public Undertakings (CoPU) asking the House panel to examine the “collusion" of a section of the government with state-owned NTPC Ltd to favour RIL. In a telephone interview, Singh, whose party helped the ruling United Progressive Alliance (UPA) win a crucial confidence motion on 22 July, spoke on the gas controversy and his relationship with Anil Ambani. Edited excerpts: 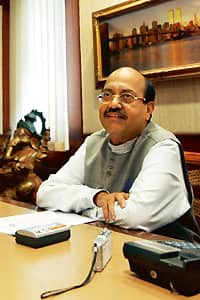 Energy issues: Amar Singh says the windfall profit tax that he suggested be imposed on private refiners is in place in the US and UK. Vijay Mathur / Reuters

Questions have been raised about your proximity to Anil Ambani, which, some say, is the reason behind your letters. What is your view on this?

My relationship with Anil Ambani cannot be used as a stick to beat me up every time. The government lawyer has surrendered the interest of NTPC in RIL’s favour. If Anil Ambani does anything wrong, I will raise that issue as well. I have made my position public that if anything as brazen as this is done by Anil Ambani, I will be the first to raise the issue. I don’t have bad relationships with certain individuals as it is being portrayed. I share a very good relationship with finance minister P. Chidambaram, Petroleum and natural gas minister Murli Deora and commerce and industry minister Kamal Nath.

Did you raise the gas issue in the Congress-SP coordination committee meeting held recently?

Very few people attended the high-level meeting. The people present included Prime Minister Manmohan Singh and UPA chairperson Sonia Gandhi. We raised the issues which were important to us. Since it was a meeting attended by very few, it will not augur well if I make its details public.

What about the letters that you had written against RIL to the Prime Minister, demanding the cancellation of the export-oriented unit, or EoU, status awarded to RIL’s refinery at Jamnagar? You had also asked for the imposition of a windfall profit tax of up to 50% on private sector refineries such as RIL.

I am not anti-RIL. The “EoU" status was not sought only for RIL’s refinery but also for other refineries as well. The concept of a windfall profit tax is being applied even in developed countries such as the UK and US. Even the chief (R.S. Sharma) of Oil and Natural Gas Corp. Ltd, which is a public sector undertaking, has made it public that he is in favour of application of a windfall tax on profit.