Gowda submits resignation to Gadkari; Shettar to take over

Gowda submits resignation to Gadkari; Shettar to take over 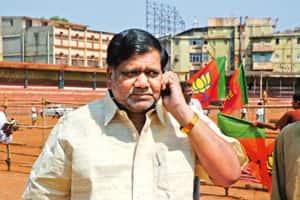 Gowda’s resignation is being seen as a victory for Yeddyurappa, who has been campaigning for his removal after the falling out between the two. Gowda was initially backed by Yeddyurappa after the latter stepped down from the chief minister's post in July 2011, when he was named in a report on illegal mining by the Lokayukta (anti-corruption ombudsman).

Announcing the resignation, Bharatiya Janata Party (BJP) president Nitin Gadkari said, “In view of the current political situation in Karnataka, Sadananda Gowda has handed over his resignation to me. In his tenure, he did good work and the performance of our government was very good."

Gowda is expected to submit his resignation to governor H.R. Bhardwaj on Monday morning.

Gadkari told reporters there were no complaints against Gowda on corruption and complimented him for being a good party worker.

“Our party has decided to hand over the leadership to Jagadish Shettar," he said.

After submitting his resignation to Gadkari, Gowda said he whole-heartedly accepted the central leadership’s verdict. “I would like to see that the remaining period of my party’s administrative time is good enough," he said. “The incoming chief minister will get all sort of cooperation from me."

Shettar, 56, hails from Hubli and practised law at the local bar for 20 years before being elected to the legislative assembly in 1994. In 1999, Shettar was made the leader of opposition in the assembly when the current Union external affairs minister S.M. Krishna was chief minister.

Shettar, who, like Yeddyurappa, is a Lingayat, was backed by the latter on the ground that the party would lose the upcoming assembly elections next year if a Lingayat was not at the helm. Lingayats constitute the largest community group in Karnataka, comprising 18% of the state’s population.

Karnataka’s politics, especially the chief minister’s post, have been dominated by two castes—the Lingayats and the Vokkaligas.

Yeddyurappa’s backing of Shettar marks a 180-degree turn since the assembly elections of 2008.

Following the assembly results, Shettar was viewed by Yeddyurappa as a threat to his dominance as the Lingayat strongman, much against his wishes, was made assembly speaker.

A rebellion of party members in 2009 forced Yeddyurappa to take him into the cabinet.

In 2011, Shettar squared off against Gowda for the chief minister’s post and was defeated at the BJP legislative party meeting.

The BJP legislative party meeting is expected to be held on Monday with BJP leaders Rajnath Singh and Arun Jaitley to oversee the formal election of Shettar as chief minister. Gadkari said no decision has been taken on the appointment of deputy chief ministers.

A BJP member of the legislative Assembly, on condition of anonymity, said Gowda was likely to be given a Rajya Sabha ticket or a state-level position.

“With this decision, the BJP has given a very important signal of directional change, post the Mumbai meet. It seems that the party has accepted to accommodate the views of mass leaders seeing the experience in Gujarat and Rajasthan. They have realized that mass leaders needed to be kept in the party," said G.V.L. Narasimha Rao, a political analyst.

“This decision (of giving in to the demands of Yeddyurappa) was pending for months as the assembly elections are due next year. Had they not set the house in order, it would have been suicidal," he said. “The party also did not want any cross-voting during the presidential elections on 19 July."

“The change of guard in Karnataka is a victory for corruption," Congress general secretary B.K. Hariprasad said. “This is only a cosmetic change, which will not bring any substantial improvement in governance."