Panel on varsity functioning may focus on regulation instead

Panel on varsity functioning may focus on regulation instead

New Delhi: A panel set up by the government to review the functioning of the two top regulators of the country’s education sector, which have come under widespread criticism for their restrictive policies and sometimes opaque functioning, may actually not look at the details of how these two entities function and instead suggest ways in which universities can regulate themselves, according to its chairman.

The panel was set up by the ministry of human resource development that oversees both regulators, and its findings could reflect the desire of the ministry to “play it safe", say two persons familiar with the issue, who asked not to be named as the findings are yet to be made public. 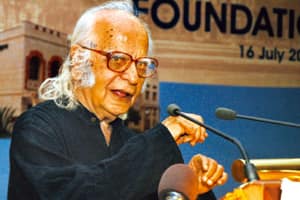 Changing scope: Chairman Yash Pal says the committee is looking into the issues of curriculum changes and academic structures at universities rather than getting into the functioning of the UGC-AICTE.

The ministry of human resource development didn’t act on the recommendation till September last year when it was asked to by the Prime Minister’s Office. Earlier this year, it set up the panel, headed by Yash Pal, a noted physicist, to review the functioning of the regulators, a first since the creation of UGC in 1956 and AICTE in 1987.

NKC has repeatedly called for abolition of the two regulators and creating an Independent Regulatory Authority for Higher Education (Irahe).

Yash Pal said the panel was looking into larger issues of curriculum changes and academic structures at universities than involving itself with the “nitty-gritty of the functioning of the UGC-AICTE".

“I would like to give the universities a self-regulatory regime. If we can make the universities autonomous and evolve a process of internal management, they will be largely free from any unnecessary regulation. Freedom means that kind of a freedom," he said.

AICTE official under the scanner

Govt confirms Yadav as head of AICTE despite many concerns

Watchdog body rues not being given teeth

The panel, set up in February as the Committee for Reorganization of UGC and AICTE has since been rechristened as the “Committee for Rejuvenation of Higher Education". It had been given a year to submit its recommendations.

The panel is looking into issues such as appointment of vice-chancellors, fee structure and expansion of courses offered at universities, including the Indian Institutes of Technology—issues managed largely by the UGC and AICTE so far. The heads of both regulators are part of the panel.

While Yash Pal declined to comment on the role that will be played by UGC and AICTE once the self-regulatory regime is in place, the persons quoted in the first instance said NKC’s recommendation on Irahe was not even on the committee’s agenda.

“Irahe’s independent status would have helped in weeding out corruption in UGC and AICTE, which have become rent-seeking bodies in higher education. But Irahe is not even on its (the panel’s) agenda and we are very worried," said an NKC official, who spoke on the condition of anonymity.

“AICTE and UGC have largely functioned as grant-giving bodies and there has been too much ministry interference. What is needed is more teeth to UGC and AICTE. Setting up a new consolidated regulator would mean starting all over again and undoing the progress made by the UGC and AICTE," said Sanjay Kumar, joint secretary, Delhi University Teachers’ Association which has been opposing NKC’s recommendation.

“UGC and AICTE are two bodies where cases of corruption have gone up. And, they have become behemoths no one is willing to question. It’s imperative that they are reorganized," said a senior official at Delhi University, who did not want to be named.