New Delhi: A plan to form a joint development bank by the BRICS group of the world’s most powerful emerging economies will have a hard time getting off the ground and would struggle to match the World Bank’s expertise, World Bank president Robert Zoellick said. 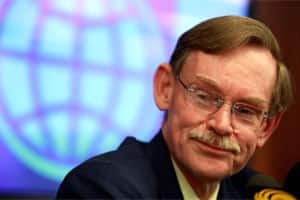 Leaders from Brazil, Russia, India, China and South Africa were meeting in New Delhi on Thursday to outline plans for a new bank which will help fund infrastructure and act as alternative lender to the World Bank and other finance bodies.

Zoellick told Reuters in an interview late on Wednesday that there are already a series of regional development banks and many countries have their own such banks, but if a BRICS bank was formed, the World Bank would work closely with it.

“The World Bank works with private sector funders, development banks, regional banks and we’d work with a BRICS bank, but it would probably be difficult for it to replicate the knowledge and expertise that we fund."

Zoellick, who was visiting a bank-funded coastal conservation project in Orissa, told reporters later that setting up a new bank was “a complicated venture" which would present challenges such as getting capital and a good rating from international financial agencies.

The head of the global money lender is ending his five-year term in June and the job is now one of the most hotly contested, with a US candidate for the first time being challenged by two contenders from the developing world.

Under a so-called “gentleman’s agreement" between the US and Europe, Washington has claimed the top post at the World Bank since its founding after World War Two, while a European has always led the International Monetary Fund (IMF), its sister Bretton Woods institution.

There have been calls by BRICS and other developing nations that these top positions should better reflect the growing power and influence of emerging economies, which are now responsible for more than half of global economic growth.

But they face stiff opposition from the US-nominated candidate Jim Yong Kim, a Korean-American health expert whose name was put forward by US President Barack Obama on Friday.

Zoellick said all three candidates were “excellent", but added that the bank’s senior leadership was already showing more and more representation from emerging economies.

“If you take the overall leadership at the bank, with all the different positions, it is more representative. I appointed the first chief economist who was from China," he said.

“At one point, the three managing directors that reported to me were all from the developing world. I think that it’s not just a question of the head of organisation, but the organisation as a whole."

He said the decision on his successor would be made in April by the bank’s board, which represents its 187 shareholders. The selection process is transparent and based on merit, he said, dismissing concerns by BRICS that it was heavily weighted in favour of the US candidate.

The candidates will have to think through where they want to take the bank, he said, adding that the board of governors, will interview each of them to understand their plans for the future.

Zoellick who took over the bank in 2007 after serving as the US deputy secretary of state, said it was good that Americans have a chance to run global institutions.

“So personally as an American, who has worked with multilateral organisations, it’s good for Americans to have a chance to run some of them. Whether it’s the World Bank or others, that’s a whole different question."