Mumbai: The finance ministry has cleared national legislation to govern microfinance institutions that, if passed in its entirety, will make the central bank the sole regulator of the ₹ 20,000 crore industry.

The new law will take away microlending from the purview of state-level laws on moneylending. 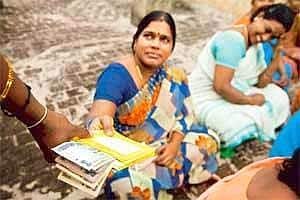 Struggling sector: A file photo of an MFI employee collecting money from borrowers.(Ganesh/Mint)

“The Bill will now be referred to the cabinet and is expected to be tabled in the budget session," one of them said.

The budget session is expected to begin by mid-March.

Industry officials expect the national legislation will help restore the confidence of investors and commercial banks in the struggling sector.

The finance ministry gave its go-ahead to the Bill after consultations with the rural development and law ministries.

But it rejected the rural development ministry’s recommendation to create a separate category of banks for microfinance institutions (MFIs), as it did not find the proposal feasible, one of the persons quoted above said.

The ministry also went ahead with a provision in the Bill that will allow microlenders to collect thrift or small deposits from borrowers, despite opposition from the Reserve Bank of India (RBI), the two people said.

The apex bank opposed this proposal as it was concerned about the safety of the money deposited with the microlenders, they said, adding that the ministry has taken note of RBI’s concern on the matter.

In July, the government released a draft of the new MFI Bill. Besides making RBI the sole regulator for the sector, the draft legislation proposed to free MFIs from the purview of state-level legislation, including the Andhra Pradesh law that resulted in a crisis in the industry.

MFIs give tiny loans to poor borrowers at 24-36% interest rates and source funds primarily from banks to do business.

“It is helpful to have a national regulation," said Kishore Kumar Puli, managing director and chief executive of Hyderabad-based Trident Microfin Pvt. Ltd and chief of the Andhra Pradesh chapter of the Microfinance Institutions Network, an industry lobby. “In the absence of this, those MFIs operating in multiple states will have difficulties to function if individual states start enacting their own legislations."

More than a quarter of the Indian microlending industry is concentrated in Andhra Pradesh, which promulgated a law in October 2010 restricting operations of microlenders. This led to a drastic rise in bad loans as borrowers stopped repaying debt. According to industry estimates, the repayment rate in Andhra Pradesh presently stands at 5-10%, as against 96-99% in other states.

Due to the crisis, banks stopped lending to MFIs. The state law was promulgated after a spate of suicides in the state, allegedly due to the coercive activities of some microlenders in the state.

Last year, RBI too issued regulations to govern MFIs operating as non-banking financial companies, based on the recommendations of an expert committee headed by noted chartered accountant Y.H. Malegam. The apex bank capped the interest rate MFIs can charge at 26% and made a minimum two-year tenure mandatory for all loans above ₹ 15,000.

According to the draft legislation, for MFIs operating as non-governmental organizations, trusts or cooperative societies, RBI will have the power to delegate any other supervisory and regulatory entities such as the National Bank for Agriculture and Rural Development (Nabard). “RBI will be the sole regulator under this Act. The draft Bill doesn’t say anybody else as regulator. RBI may delegate other entities it finds fit for this rule," the second person quoted above said.

The draft law also proposes setting up a microfinance development council to advise the government on policies and programmes required for the development of the sector.

As per this, the members of the council will represent the industry, the government, RBI, the National Housing Bank, Nabard and Small Industries Development Bank of India. Besides, it will look into establishing a credit information bureau for the creation of a database of microfinance borrowers.

Further, the draft legislation envisages the establishment of state advisory councils for coordination between the states and the Centre with regard to the working of the industry.

The draft legislation envisages a microfinance development fund to provide loans, refinance, grants, seed capital or any other financial assistance to any MFI and to which all government grants received and fees payable for this sector will go.

The proposed law will also empower RBI to ask MFIs to cease activities if warranted on inspection of their accounts. RBI will also be able to cancel registrations granted to MFIs.