Output at factories, utilities and mines rose 5.4% from a year earlier after gaining 3.8% in May, according to a Bloomberg News survey of 20 economists. The Central Statistical Organisation will release the report at midday in New Delhi on Tuesday. 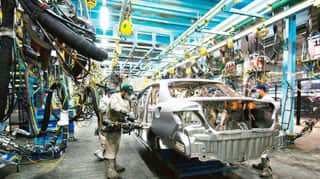 Reserve Bank of India governor Yaga Venugopal Reddy on 29 July raised the central bank’s benchmark rate by a half point to 9% and increased the reserve requirements for commercial lenders to 9% from 8.75%.

Higher interest rates are discouraging spending by consumers who rely on loans to buy cars and motorbikes. Sales at Maruti Suzuki, maker of half the cars sold in India, increased 1.1% in July, the slowest pace in four months. Sales at Tata Motors, India’s biggest truck maker, fell 3.3% in July as demand declined.

World Trade Organization (WTO) director general Pascal Lamy is visiting India for two days from Tuesday to gauge industry views on the collapse of talks on a global trade agreement.

A nine-day WTO summit in Geneva ended without an agreement to cut agriculture subsidies and tariffs on industrial goods. The talks collapsed on 29 July after India and the US disagreed over how poor nations could increase duties to protect their economies from surging farm imports.

Pillai said on 4 August that a consensus on WTO talks may take two years due to elections in the US and later in India.

The Supreme Court on 8 August allowed Posco, Asia’s third largest steel maker, to build the plant and buy iron ore from the market. Land disputes and delays in allocating mining licences have stopped Posco from proceeding with potentially the biggest overseas investment in India.

Separately, Sterlite Industries, the nation’s largest zinc and copper producer, won approval for its unit to mine bauxite in the eastern state of Orissa.

Bonds gained after the government sold the benchmark notes at a lower-than-expected yield, indicating that demand for debt increased. The 10-year security attracted bids worth 2.5 times the amount on offer, RBI said on 8 August, compared with the so-called bid-cover ratio of 2.07% at the previous auction on 24 July.

India’s rupee advanced during the week on speculation rising stocks will encourage overseas fund managers to buy more of the nation’s assets. The currency rose to the highest level in almost three months, boosted also by a slump in crude oil prices that will reduce the nation’s import costs.

The rupee gained 0.7% last week to 42.06 per dollar, the highest since 12 May. India’s financial markets will be closed on 15 August on account of Independence Day.