India has a problem with small change. It is rather common that autorickshaw or taxi fares are rounded up to the nearest multiple of 10 because the driver cannot find the change. It is common to buy additional items on a visit to the neighbourhood store so that your bill ends up as a round number. In restaurants, it is common for tips to be a function of rounding up the total bill to the nearest conveniently-payable number. A popular joke is that toffees will soon be a legal tender as they are frequently handed out by shopkeepers in lieu of small change.

Why do we have such a problem? Have things always been this way? What is the distribution of the various denominations minted by the Reserve Bank of India (RBI), and how has it changed over time? Can this help us answer why we have a change problem? Digging into data released by the central bank on the issue of different notes and coins can help us answer this. 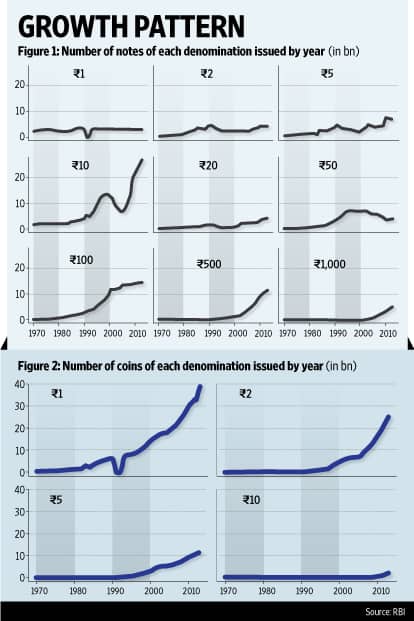 What the graphs show is that the number of ₹ 1 coins has been consistently higher than that of coins of higher denominations (coins smaller than ₹ 1 have been purposely left out of analysis since only the 50 paisa coin survives now, it is hard to find sub-rupee transactions nowadays). There is one important exception, though.

Notice, for example, the trough in the graph of the ₹ 1 coin in the early 1990s—a marked discontinuity. This is 1992-93 and 1993-94 when the government, which issues all coins, did not issue any ₹ 1 coins. From Figure 1, it is evident that no ₹ 1 notes, the purview of RBI, were issued in these two years either.

It is intriguing since this was the time when India started economic reforms under then prime minister P.V. Narasimha Rao and finance minister Manmohan Singh, and the rupee was devalued massively. Could the non-issuance of the currency note and coin in that time have had something to do with the devaluation? A cursory search doesn’t disclose much, but there is definitely a story here (notice that issuance of currency of other denominations continued normally, and ₹ 2 coins were introduced).

RBI possibly realized its mistake in cutting down the number of ₹ 10 notes in the first half of the decade and production ramped up rapidly in the second half (notice the high slope in that period in the graph). Yet, it seems like it was too late to undo the damage done between 2000 and 2005.

As the toffee joke illustrates, there is also a perceived shortage in the ₹ 1 and ₹ 2 coins. The data, however, is not clear on why this is so. Apart from the brief intermission in the early 1990s, which is a very long time ago, the production of coins of all denominations has been increasing steadily. Could the problem with lack of change have to do with inappropriate distribution of the coins rather than simple inadequate numbers?

The other intriguing thing in the data is regarding the issue of the ₹ 1, ₹ 2 and ₹ 5 notes. RBI still issues these denominations, while officially, production of these notes ceased in the mid- 1990s as the focus on these currencies shifted to coins. The number of such notes being printed is not large, but that they are being printed at all is intriguing.

Finally, how do we know if the current mix of denominations issued by RBI is appropriate, and will help in resolving the change problem? The answer to this is not clear, for to know whether the mix of notes and coins is appropriate, we will need data on the distribution of the transaction amounts of small sales.

The problem is that such data is incredibly hard to collect, since small cash transactions (for which change problems arise) are precisely the transactions that take place without much formal accounting. Even if this distribution is well understood, there is still the liquidity problem. If Kumar is transacting with Prasad, together they should have the notes and coins necessary to transact the exact amount they need to transact. The general economy being flush with coins is not of much help if Kumar and Prasad can’t put together a set of coins that will help them transact to their degree of accuracy.

There is also the issue of costs. As the feature on 10 April showed, the relative cost of printing low-value notes (as a percentage of the value of the notes) is quite high, so when capacity is limited, RBI would rather prefer to print more high-value notes in order to keep up with the total demand for currency (this is one reason to move to coinage for low-value notes). Printing more high-value currency is also more cost-efficient from RBI’s perspective.

This, however, can lead to a shortage of change (note that lower value notes are likely to be turned over more frequently than higher value notes, and thus more of them need to be produced for replacement purposes only), and prevents certain kinds of legal small-denomination transactions from taking place due to the sheer lack of change. The move to electronic payments for small amounts cannot come sooner.

I’m just back from a vacation in Europe, across five countries using three different currencies. They seem to have the opposite problem there. Apart from one transaction, there was never any problem of change, and in fact the problem seemed to be one of too much change. I had to frequently give out large amounts in coins to lighten my wallet. This might be a consequence of the increased coinage in these countries. In the euro zone, for example, €2 ( ₹ 135) is a coin, while the smallest note is that of €5. In Hungary, 200 forints ( ₹ 44) is a coin, while the smallest note is for 500 forints. While we have recently started issuing ₹ 10 coins, the graphs show the issuance of ₹ 10 notes far outpaces that of ₹ 10 coins. Maybe a move to complete coinage of ₹ 10 and ₹ 20 might help solve our change problem.