Hyderabad dropped one position from last year in Mercer's 2016 Quality of Living rankings due to frequent power disruptions, heat wave

Bengaluru: Southern India emerged at the top for quality of life and safety in a ranking of cities released by human resources consulting firm Mercer on Tuesday.

Hyderabad offered the best quality of life in India, according to Mercer. The joint capital of Telangana and Andhra Pradesh, however, dropped one position from last year’s 138th rank in Mercer’s 2016 Quality of Living rankings because of frequent power disruptions and a heat wave that claimed 1,700 lives.

Other Indian cities to be featured among the top 230 cities across the globe are Pune, Bengaluru and Chennai, ranked 144, 145 and 150, respectively. 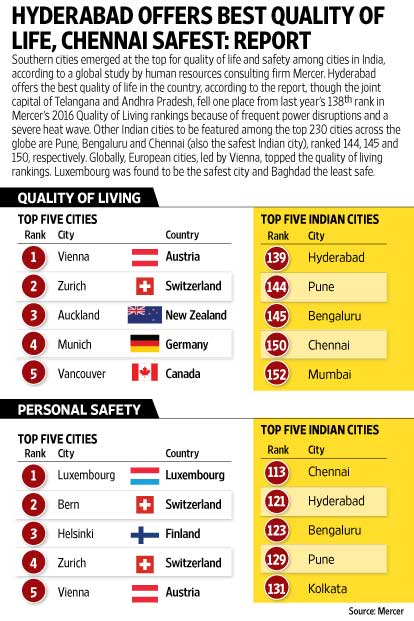 The rankings took into account factors such as the political and social environment, medical and health care, public services, recreation facilities and natural environment among others.

Over time, Hyderabad, Bengaluru, Pune and Chennai have emerged as the cities of choice because of factors including a relatively low crime rate, cleaner air and higher number of reputable and international English schools, said the report.

“Fewer traffic jams, a more balanced weather and the warmth in people add to the advantages of staying here in Hyderabad," said M.R. Rao, managing director and chief executive of SKS Microfinance Ltd who has lived in Mumbai, Bengaluru and Hyderabad.

For Biocon Ltd chairman Kiran Mazumdar-Shaw, the inclusive and cosmopolitan nature of Bengaluru, a city she was born and raised in, and citizens’ engagement in policy development has played a role in making the city safe and improved the quality of life.

However, Indian cities have not made much progress on the quality of living scale, after scoring nearly the same as they did last year. In fact, none of the Indian cities made to the top 100 of the 230 surveyed.

Despite being ahead of other Indian cities in the Mercer rankings, a lot of improvement will be needed before Hyderabad, Bengaluru or Chennai can match top cities in the world.

Suresh Reddy, chairman and chief executive of digital marketing and wearable tech firm Lycos Internet Ltd, said Hyderabad’s workforce needs an upgrade. “We could use better colleges. We have very good colleges now. But we could use a few more tech colleges which are reputed."

Bengaluru, according to Mazumdar-Shaw, has not paid enough attention to its infrastructure. “We have been underinvesting in improving roads and sorting the garbage situation. We should also aim for being the cleanest city, besides these metrics," said Shaw.

Chennai was recognized as the safest city in India based on its internal stability, levels of crime and local law enforcement, followed by Hyderabad and Bangalore.

The cultural foundation of the city gives it an inherent stability, said Lakshmi Venu, director of Tafe Motors and Tractors Ltd. Moreover, the government and police force have also consistently focused on enforcing law and order, added Venu.

“Both as a citizen and as a business person, I find the city very secure. Even during the floods we saw that there were few thefts," said Venu.

Globally, European cities, led by Vienna, topped the quality of living rankings. Luxembourg was found to be the safest city and Baghdad the least safe.

The quality of living and safety record of cities help employers compensate their employees fairly when sending them on international assignments. Employee incentives include a quality-of-living allowance and a mobility premium. For instance, an employee moving from Mumbai to Chicago, would be entitled to an allowance amounting to 23% of base salary on account of the cost of living, said Ruchika Pal, India practice leader, global mobility, Mercer.

Interestingly, the survey suggests that Indian cities are safer than most others in South Asia. Dhaka in Bangladesh is ranked 216 and Pakistan’s Islamabad, Lahore and Karachi are ranked 193, 199 and 202, respectively.

Yogendra Kalavalapalli and Trushna Udgirkar contributed to this story.