What the Dalit protests tells us about BJP’s caste conundrum

New Delhi: The countrywide Dalit protests against dilution of the Scheduled Caste and Scheduled Tribe (Prevention of Atrocities) Act, 1989 (SC/ST Act), which claimed nine lives on Monday has thrown the spotlight on the Bharatiya Janata Party (BJP)-led Union government’s stance on caste issues.

Prodded by its allies, some of its Dalit MPs and opposition leaders, the government has filed a review petition challenging the dilution of the SC/ST Act, and its spokespersons have sought to assuage the sentiments of protesting Dalits (Scheduled Castes, or SCs) and Adivasis (Scheduled Tribes, or STs). Yet, this may not be enough to cool tempers of Dalits who have been facing rising atrocities over the past few years, despite the stringent provisions of the Act meant to protect them.

The government’s perceived inability to protect Dalit and Adivasi interests may hurt the BJP politically as it gears up to face the electorate in 2019 Lok Sabha elections. At the same time, an intensive outreach campaign to woo Dalit and Adivasi voters could alienate the core upper caste support base of the BJP.

On the issue of the Act itself, there’s a stark difference of opinion across caste groups, with several non-SC and non-ST organizations demanding a dilution.

What complicates matters for the BJP is that despite a significant swing in Dalit and Adivasi votes for the party over the past decade, the party continues to rely heavily on upper caste support, according to data from a nationally representative post-poll survey conducted by the Lokniti research program at the Centre for the Study of Developing Societies (CSDS). 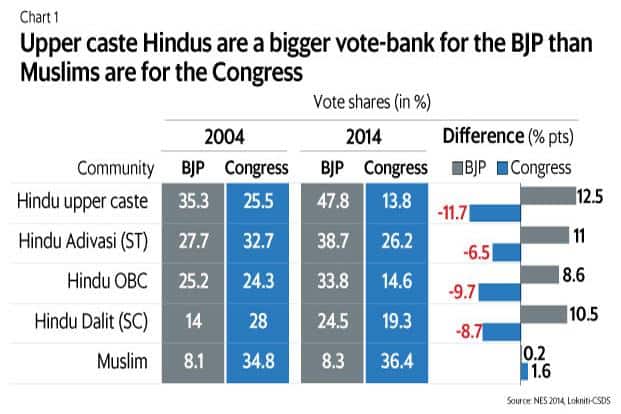 As the chart shows, in the 2014 elections, the BJP managed to garner nearly a quarter of Dalit votes, a historic high for the party. But its support among upper caste Hindus was even more overwhelming, with nearly one in two Hindu upper caste voters voting for the party. Upper caste voters have also been more loyal to the party over the years, and even in 2009, supported the BJP in greater numbers than the Congress. This is partly because of the history of the party. Right from its Jan Sangh days, the party has depended on the Brahmin-Bania combination for funding and for votes.

However, in the post-1991 Mandal phase of politics, like other parties, the BJP too attempted to broaden its appeal by wooing backward caste and Dalit leaders to its fold. Such attempts received a fillip during the campaign of Prime Minister Narendra Modi, who attempted to stitch together a rainbow coalition of Hindu voters in 2014. The attempt to project a socially inclusive image also saw the party nominate Ramnath Kovind, a Dalit, to the post of President in 2017, when the party was almost certain of getting any nominee elected. 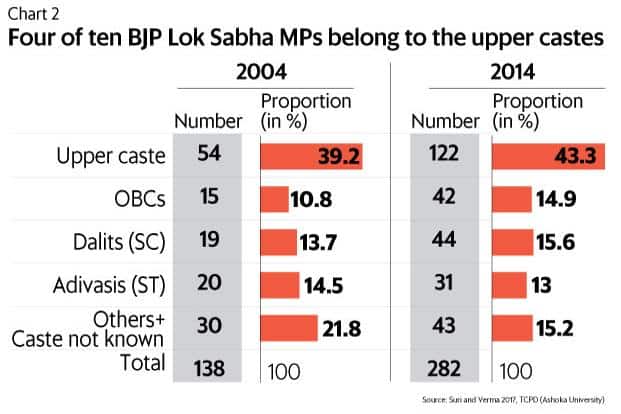 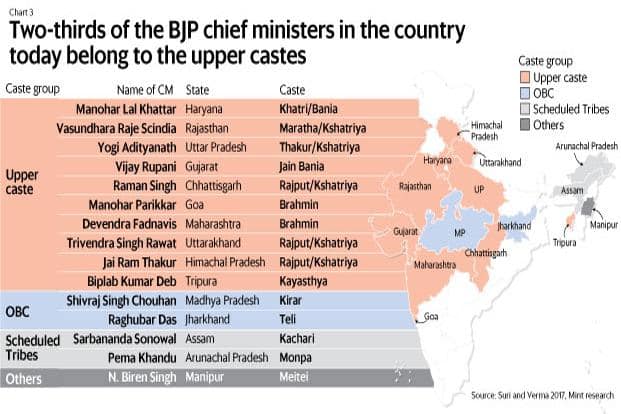 Even other backward classes (OBCs) do not find adequate representation in the party despite their numerical heft. In 2014, of every 100 votes the BJP received, 37 were from OBCs. Upper caste votes accounted for a little less than 33% of the votes the BJP received. Yet, 43% of the party’s MPs are upper caste and only 15% are OBCs. Among chief ministers, only two are OBCs, and none is a Dalit.

The predominance of upper castes in the upper echelons of the party may not be a deliberate strategy. But it could explain why the party has failed to quell the growing tide of discontent among backward caste groups, and why such voters may be losing patience with the ruling dispensation.

The BJP’s caste conundrum has some parallels with the challenge the Congress faced when it was the principal pole of Indian politics. At that time, it was the father of the Indian Constitution, B.R. Ambedkar who went against the mainstream nationalist thinking to argue for electoral reservations for Dalits.

Ambedkar consistently argued that the Indian government, with the best of motives, will not be able to do much to address the grievances of Dalits unless it had Dalit representation.

The BJP’s top leadership, including Modi, have often invoked Ambedkar’s legacy in their speeches. They should pay more attention to what Ambedkar had to say about caste representation in politics if they want to retain their support base among backward caste groups. They may also have to risk the alienation of a section of their core support base in doing so.