Mumbai: The government plans to set up special courts and train judges in the next two years to handle intellectual property rights (IPR) cases, which have been piling up since India reintroduced the product patent regime in 2005.

These measures will be part of ongoing IPR reforms, on which the government is spending nearly Rs500 crore, according to the department of industrial policy and promotion (DIPP), which allocates the budget for IPR-related projects.

“The next phase of upgradation would see setting up of specialized IP courts, and a continued training programme for judges in the higher as well as lower courts," a senior DIPP official said.

He did not want to be identified as the reforms are yet to be officially announced. 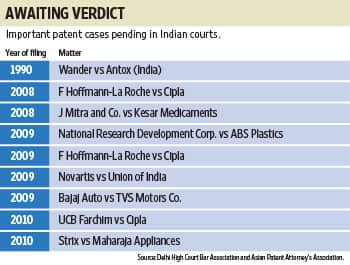 The next two years will also witness moves to spread awareness about IPR law among industry and the academia, said P.H. Kurian, controller general of patents, designs and trademarks.

IPR reforms were initiated just before the product patent regime was reintroduced under India’s obligations to trade related intellectual property rights agreements of the World Trade Organization in 2005.

Creation of modern infrastructure and information technology applications for the offices of patents, designs and trademarks were the priorities in the first phase, which concluded in late 2007. Since then, the focus has been on digitizing IPR records.

But these reforms have, until now, failed to expedite the disposal of IPR cases. The lack of a foolproof system in processing patent applications and grants has added to the number of litigations.

While an informed community of lawyers is a great help to the courts to handle complicated patent cases, judges who specialize in this comparatively new domain of law are the key for improving the system, Madan Lokur, acting chief justice of the Delhi high court, said at an event to mark World Intellectual Property Day on Monday.

Lokur said some courts had shown expertise by disposing cases quickly. But nearly 85% of the decisions are appealed against, which would add to the number of IPR cases in higher courts, he said.

“Given that our Indian IP judges have not had much exposure to the nuances of sophisticated patent disputes, a specialized IP court is an excellent idea," said Shamnad Basheer, an IP law expert and the ministry of human resource development chair at the National University of Juridical Sciences, Kolkata.

“However, to begin with, it might be best if we simply institutionalize the informal norm of having IP judges or IP benches in some of the metro courts," he said.

The Commercial Division of High Courts Bill seeks to do this to some extent by providing for special commercial benches that would look into IP disputes, Basheer added.