The survivors are demanding that the 1989 verdict, in which India agreed to a $470 million settlement, be reopened

New Delhi: On the intervening night of December 2-3 1984, a highly unstable chemical, methyl isocyanate (MiC), an intermediary substance used to manufacture Sevin, a pesticide, leaked from tank 610 in the Union Carbide plant in Bhopal.

The leak was first detected by workers about 11.30pm as their eyes began to burn.

By 12.40am, the temperature and pressure in the tank had built up. Within an hour of the leak, victims started arriving at the nearby government health facility, Hamidia Hospital.

It was 3.30am, on 3 December 1984, and the police in Bhopal still had no clue what had leaked from the Union Carbide pesticide plant. The then superintendent of police, Swaraj Puri, was in the control room. “My first question to the company officials was, ‘What is it?’ The official said he had no clue."

Next morning, the company equated the poisoning with tear gas, adding that the gas was “slightly more potent". What followed next can only be described as a holocaust and not a “tragedy", Puri says. “Calling it a tragedy or an unfortunate accident is a reflection of a person’s value system. For me, it was a holocaust. If an outsider perceives the impact of gas leak as an accident, it is because he has not lived through it." 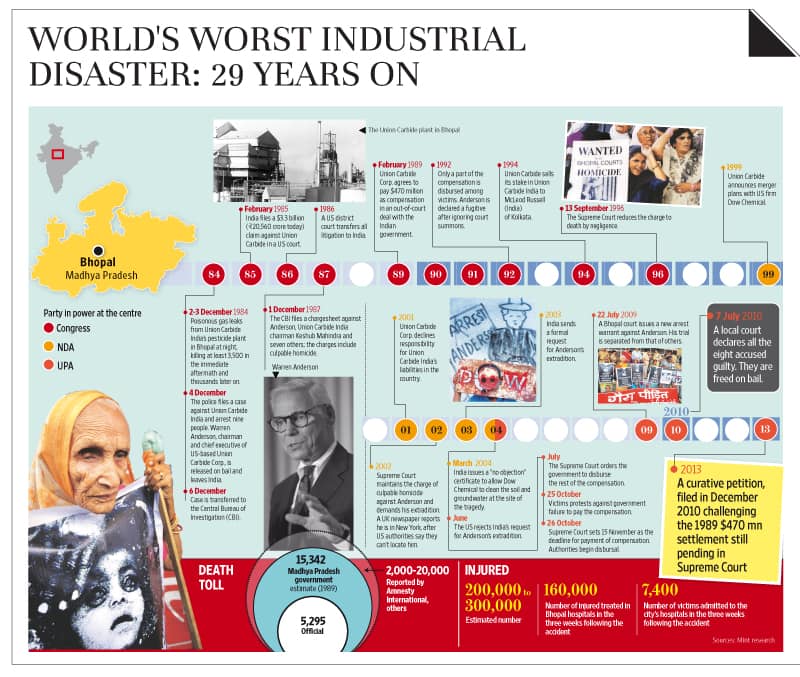 “We have serious differences with the central government’s stand regarding the number of dead (just 5,295) and the seriously injured (just 4,944) and regarding the paltry claims for relief and rehabilitation and for environmental damage," said Abdul Jabbar, a survivor and activist who set up the Bhopal Gas Peedit Mahila Udyog Sangathan (BGPMUS), a victim-campaign group. “The stand of BGPMUS regarding the number of dead (over 20,000) and seriously injured (over 150,000) has already been explained in the special leave petition (SLP) that is currently pending before the Supreme Court as SLP," he added in a media statement.

An Amnesty International report, published in 2004, says fatalities from the first few days of the disaster had been grossly underestimated and it would not be unrealistic, in this context, to put the number of the dead at over 20,000.

The curative petition for reopening the settlement is still pending.

Nearly three decades later, Puri says what disheartens him the most is that despite the company being charged with “culpable homicide not amounting to murder", not one official from the Union Carbide headquarters appeared in court, and a magistrate declared the company and its chief executive “absconders" from the law.

Victims’ groups, for long, argued about Dow being drawn into the criminal case for allegedly giving shelter to Union Carbide—considered a fugitive.

“I have woken up with nightmares of that night. Every year, I spent 3 December at the cemetery where hundreds of children were buried. This could have been handled much better and the company owed it to the people of Bhopal to take upon themselves the burden of responsibility that came with this holocaust," he said.