Data shows that the problem with the Indian bureaucracy is not that it is too large, but that it is not large enough

One of Narendra Modi’s key promises in the run-up to the 2014 national election that enthused voters and investors alike was the mantra of “minimum government, maximum governance". But with a jumbo-sized cabinet and a finance ministry that seems to favour scale expansion as a counter-cyclical strategy to drive growth, Modi has found it difficult to deliver on that promise.

The governance ranking of countries is based on a score of government effectiveness assigned to each country by the World Bank. e government effectiveness score takes into account both quantitative parameters such as the coverage of public transport and sanitation as well as qualitative parameters such as schooling standards and bureaucratic quality. The data on government spending has been sourced from the same organization.

The dreary memories of India’s pre-liberalization licence-permit raj regime and the more recent memories of gigantic corruption scandals that were exposed in the past few years perhaps led to the idea of minimum government gaining traction in the country. But while the Indian state is overbearing in its presence in several areas of the economy where it is not needed, it is conspicuous by its absence from several areas where it is sorely needed. As previous Plain Facts columns have highlighted, India lacks enough public servants to perform critical roles such as collating social statistics or attending to rural health needs of Indians.

While this may run against the common grain, data shows that the problem with the Indian bureaucracy is not that it is too large, but that it is not large enough. As US-based political scientist Milan Vaishnav points out in his writings, India has one of the lowest rates of per capita public sector employment of any Group of Twenty country. The challenge for India is to “right-size" the state and direct it towards areas where it is needed but absent, Vaishnav argues. The key to maximum governance may well lie in effective rather than minimum government. 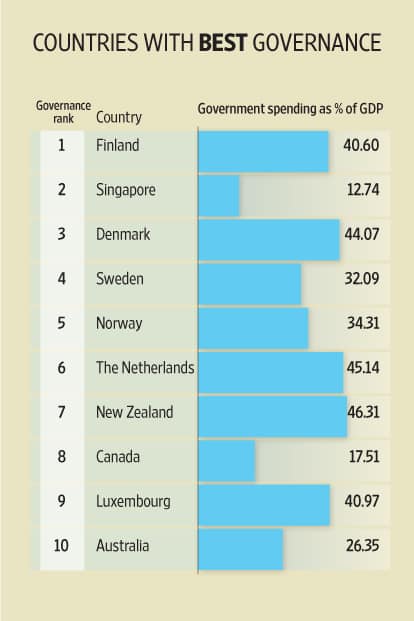