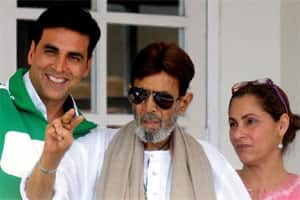 “Rajesh Khanna has been admitted to Lilavati hospital this afternoon," a hospital spokesman told Reuters, declining to give more details.

On Thursday, the gaunt-looking actor waved to fans from the balcony of his residence, flanked by son-in-law Akshay Kumar and estranged wife Dimple Khanna, after media reports said he had stopped eating.

Khanna made his acting debut with “Aakhri Khat" but shot to fame three years later, playing a dashing young pilot in the 1969 hit “Aradhana". Often called the country’s first superstar, Khanna featured in successful films such as “Amar Prem" and “Anand" over the next decade.