IIP shrank 1.9% in October; economists expect contraction to continue as economic activity slows further from November due to demonetisation

New Delhi: India’s factory output, as measured by index of industrial production (IIP), contracted 1.9% in October after rising 0.7% in September.

Economists expect the contraction to continue in the next few months as economic activity slows down further from November on account of demonetisation of high-value currency and the resultant cash shortage in the banking system.

Data released by the Central Statistics Office showed that in October, both mining and manufacturing contracted while electricity registered positive growth. 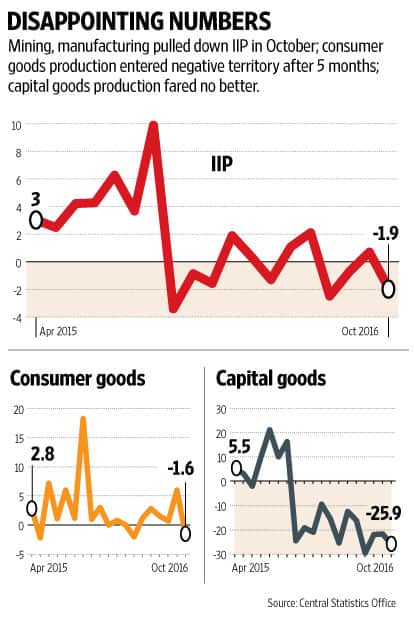 While mining shrank 1.1%, manufacturing contracted by 2.4%. Electricity generation grew 1.1%. But worryingly, capital goods production—a key indicator of the investment demand in the economy—contracted for the twelfth consecutive month, by 26%.

The contraction in factory output is despite the fact that October was the festive month this year as against November last year.

For the period April to October, factory output contracted by 0.3%. Mining and manufacturing also contracted in the seven-month period with only electricity registering positive growth.

“An unfavourable base effect and a larger number of holidays weighed upon factory output in October 2016, countering the much-awaited festive upturn as well as the rise in growth of merchandise exports and the core sector industries," said Aditi Nayar, principal economist with ICRA Ltd.

An item-wise classification shows that sub-groups in the manufacturing sector, such as electrical machinery and apparatus and office accounting and computer machinery, saw a sharp contraction. Items like coke, refined petroleum products and nuclear fuel, motor vehicles, trailers and semi-trailers and basic metals registered growth.

CARE Ratings said in a note on Friday that the factory output numbers were disappointing. “This is a setback because October was seen as the time when growth would start accelerating. With the demonetisation scheme causing disturbances in several segments like consumer goods, automobiles, cement, steel, and other backward-linked products, growth would further decline in November and December," it said.

Last month, Prime Minister Narendra Modi announced the cancellation of the legal tender of Rs500 and Rs1,000 notes. This has led to a severe shortage of cash in the economy, resulting in an adverse impact on economic activity. The move has forced many economists and international institutions to lower India’s growth forecasts.

India’s economy grew at 7.1% in the first quarter of 2016-17 and at 7.3% in the second. Economists now expect growth to slow down to less than 6% in the second half of the year, dragging the overall growth rate to less than 7% for the financial year.

“For the year so far, production continues to be in the negative zone at -0.3%, with both consumer and capital goods witnessing negative growth. Low growth in industries has pushed back investment, i.e. capital goods, at a time when capacity utilization rates are low. The only support coming in the basic and intermediate goods may be attributed to government spending, which is on track, but cannot breach the fiscal constraints," said CARE Ratings.