The realization that the economy needs a stronger fiscal push comes after India's GDP growth stuttered to 5.7% in the first quarter of 2017-18

New Delhi: The government is considering a more aggressive fiscal push in Union Budget 2018, likely to be presented on 1 February, after economic growth slumped to a three-year low in the quarter ended 30 June.

The finance ministry has started the budget-making exercise for the fiscal year starting 1 April with the release of the budget circular containing the timelines for submission of information by various departments. Ministries and departments have to submit tentative budget estimates for fiscal 2019 by 30 September. 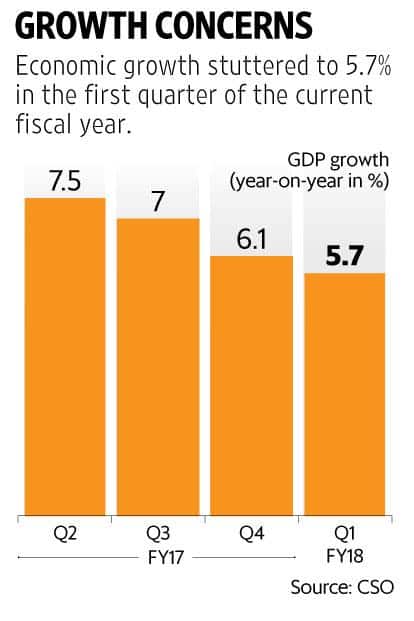 “There is now hardly any doubt that the current slowdown goes beyond transitory shocks like demonetisation or goods and services tax (GST). With hardly any hope for a quick revival in private investment, the government now has to take a decisive lead to stimulate the economy by significantly increasing allocation for public investment projects," a finance ministry official said on condition of anonymity.

The realization that the economy needs a stronger push comes after India’s GDP growth stuttered to 5.7% in the fiscal first quarter. Reviving economic growth and creating more jobs, promises that the ruling Bharatiya Janata Party made to come to power in 2014, is crucial as the party seeks re-election in 2019.

The finance ministry official cited earlier, however, said that the aggressive spending does not automatically mean that the government will breach the 3% fiscal deficit target set for 2018-19. “Much will depend on tax collection trend for the rest of the year, especially in GST," he added.

Arvind Subramanian, chief economic adviser in the finance ministry, in his second volume of the Economic Survey 2016-17, released in August, warned that the economy is facing demand deflation and overcoming the near-term demand shortfall will be critical by making important policy choices such as “magnitude and composition of fiscal consolidation in the context of commitments made".

Finance minister Arun Jaitley, after the first quarter GDP data was released, had said it is a matter of concern that GDP growth in the quarter had slipped. “It throws up a challenge for the economy. In coming quarters, we require—both in terms of policy and investments—to work more to improve upon this figure," he added.

State Bank of India in a report published on 8 September said any cutback in expenditure at this point will be significantly deflationary when private investment is unlikely to be forthcoming unless non-performing asset resolution starts happening by the March quarter of 2017-18.

Globally, too, there is growing clamour for setting aside austerity measures and pushing for growth. The United Nations Conference on Trade and Development (UNCTAD) in its latest trade and development report, titled Beyond Austerity: Towards a Global New Deal, called for a globally coordinated strategy of expansion led by increased public expenditure to crowd in private investment.