Thanks for Visiting Mint
You seem to have an Ad Blocker on. Please turn it off in order to continue, or whitelist Mint
HOW TO TURN OFF AD BLOCKER
OR
REFRESH IF YOU ALREADY TURNED OFF THE AD BLOCKER
Home >Politics >Policy >IMF backs higher interest rates to anchor expected rise in inflation

New Delhi: The International Monetary Fund (IMF) on Tuesday called for further tightening of monetary policy in India to anchor expectations as inflation was expected to pick up.

The fund maintained India’s growth projection at 7.3% for 2018-19. “Monetary policy should be tightened to re-anchor expectations where inflation continues to be high (as recently done in Argentina), where it is increasing further in the wake of a sharp currency depreciation (Turkey), or where it is expected to pick up (India)," the IMF said in its bi-annual World Economic Outlook report.

The IMF estimates inflation in India to rise from 3.6% in 2017-18 to 4.7% in 2018-19 amid accelerating demand and rising fuel prices. It said core inflation, excluding all food and energy items, in India had risen to about 6% as a result of a narrowing output gap and pass-through effects of higher energy prices and exchange rate depreciation. 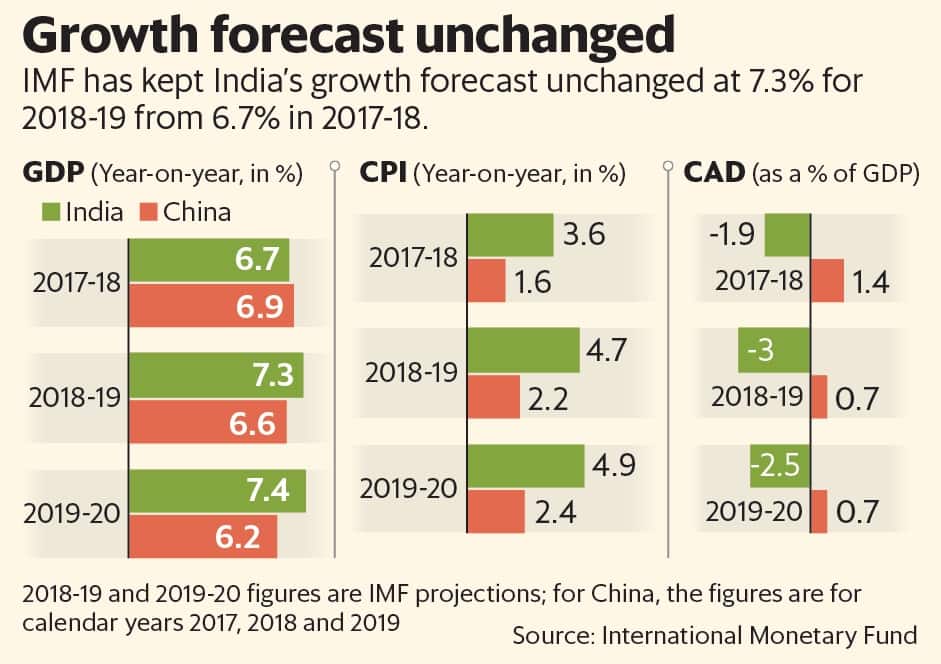 The IMF said interest rates in advanced economies are expected to increase from the current still-accommodative levels, and with trade tensions rising, emerging market and developing economies should be prepared for an environment of higher volatility. It said under floating exchange rate regimes, such as the one in India, foreign exchange interventions should be limited to addressing disorderly market conditions while protecting reserve buffers.

“This acceleration reflects a rebound from transitory shocks (the currency exchange initiative and implementation of the national goods and services tax), with strengthening investment and robust private consumption. India’s medium-term growth prospects remain strong at 7.75%, benefiting from ongoing structural reforms, but have been marked down by just under 0.5 percentage points relative to the April 2018 WEO."

The IMF praised the Narendra Modi government for implementing important reforms, including GST, the inflation-targeting framework, the Insolvency and Bankruptcy Code, and steps to liberalize foreign investment and making it easier to do business. “Looking ahead, renewed impetus to reform labour and land markets, along with further improvements to the business climate, are also crucial," it said.

In India, reform priorities included reviving bank credit and enhancing the efficiency of credit provision by accelerating the clean-up of bank and corporate balance sheets, and improving the governance of public sector banks, it said.

“A high interest burden and risks from rising yields also require continued focus on debt reduction to establish policy credibility and build buffers. These efforts should be supported by further reductions in subsidies and enhanced compliance with the goods and services tax," it said.