Home / Politics / News /  Malnourishment: prevalent but not an issue for this year&#8217;s polls
Back
Share Via

Malnourishment: prevalent but not an issue for this year&#8217;s polls

Malnourishment: prevalent but not an issue for this year’s polls

Guna, Madhya Pradesh: Sonam, all of 28 months old, doesn’t cry or smile much.

She weighs just 5kg—less than half the prescribed weight of girls of her age—and cannot even open her eyes.

That’s a common malaise in Guna. 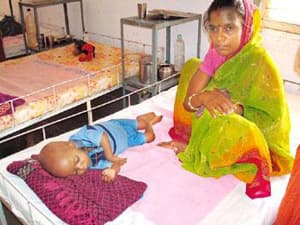 Sonam, Sunny, and Chandra Vijay are among the thousands of children in Guna whose lives have never been touched by India’s economic growth. According to a World Bank report released earlier this month, India has the highest number of so-called underweight children in the world.

According to the National Family Health Survey III, 60% of the children below the age of three in Madhya Pradesh were underweight in 2005-06. The all-India average was 46%.

The story is worse in Guna, the high-profile constituency of the Scindia family. Union minister Jyotiraditya Scindia is the sitting member of Parliament from the constituency and is contesting the 30 April election here on a Congress party ticket.

Madhya Pradesh is ruled by a Bharatiya Janata Party government headed by Shivraj Singh Chauhan. The party has been in power in the state since December 2003, when it came to power defeating the Congress.

In Guna, only 11.1% of the children are fully immunized—or have received all vaccines children are supposed to receive—and 23.5% have not received any vaccines at all, according to Indicus, a Delhi-based think tank. At least half the children born in this district do not receive any check-ups at all and Guna has among the highest proportion of malnourished children in the country, according to more data provided by the think tank.

Officials from the state administration could not be reached for comments.

“As far as I am concerned, development and progressiveness are my election plank. I have introduced projects worth Rs2,100 crores in Guna. I do not think any other MP has brought this much money to his/her constituency. Whatever developments Guna has, all of them are centrally funded. There are other things that I can’t put money value. For example, the train services I brought in to my constituency," added Scindia.

Health is a so-called state subject in India, which means the states are responsible for it. These statistics on malnourished children have not escaped the attention of Unicef, the United Nations arm that works in the area of child welfare.

According to Vandana Agarwal, Unicef India’s section chief in-charge of nutrition and the nutrition specialist with Unicef-Bhopal, about 50% of children in Guna are malnourished. The 20-bed Nutrition Resource Centre (NRC) in the district hospital at Guna has at least 40 children who are acutely malnourished at any given point in time. The other four 10-bed NRCs here also are full throughout the year, except during the harvest season when the mothers prefer to work in the fields and take their children with them.

Unicef set up its first NRC in Guna in 2007 and, emboldened by its success has set up 149 more across the state.

Bad as the current statistics on malnourishment in Guna are, they are better than what they once were, said Agarwal.

Based on different government reports and her own experience, she says that the number of highly malnourished cases have come down in the last two years.

“Malnutrition is a complex problem and that should be addressed in a holistic way," Agarwal said, adding that awareness about breast-feeding, continuous monitoring of the child’s growth and accessibility to safe drinking water are all part of it.

The high number of malnourished children in Madhya Pradesh and some other Indian states can be attributed to poverty, unhygienic surroundings, unavailability of safe drinking water, ignorance and negligence.

Claris Dayan, in charge of the NRC at Guna district hospital, says ignorance, not poverty, is largely to blame. The mothers—most of them are agricultural labourers—keep their infants in cloth cradles and hang these on trees near the fields. “The child starts sucking its thumb as its cries for milk go unanswered. Gradually, it develops a lactose (milk) intolerance and slips into malnourishment. The mother, unaware of the consequences, does not bother to take any remedial step," Dayan said.

Malnourished children are less likely to perform well in school and more likely to grow into malnourished adults, and are at greater risk of disease and early death.

Rabita, a basket maker, said she was relieved to see her son Sunny improving.

The NRCs do not admit the children unless it is recommended by a medical practitioner.

In Madhya Pradesh, government workers visit homes, weigh newborns and monitor their development. The state organizes camps along with Unicef to educate mothers on hygiene, childcare and nourishment.

“The government is doing lot of things. However a lot more needs to be done at the service delivery front," said Agarwal.

Still, malnourishment isn’t an issue in this year’s elections.