Home >Politics >Policy >IIP or PMI, which is a better tool to gauge Indian economy?

IIP or PMI, which is a better tool to gauge Indian economy?

Coming after an uptick in quarterly growth in the December quarter, the rebound in the index of industrial production (IIP) for January has lifted hopes about an economic turnaround. However, the IIP figures are at odds with the trend in the Nikkei manufacturing purchasing managers’ index (PMI), which fell for the second consecutive month in February. The corresponding index for services fell to a six-month low of 47.8 in February. A PMI reading below 50 indicates contraction, and one above 50 indicates growth. 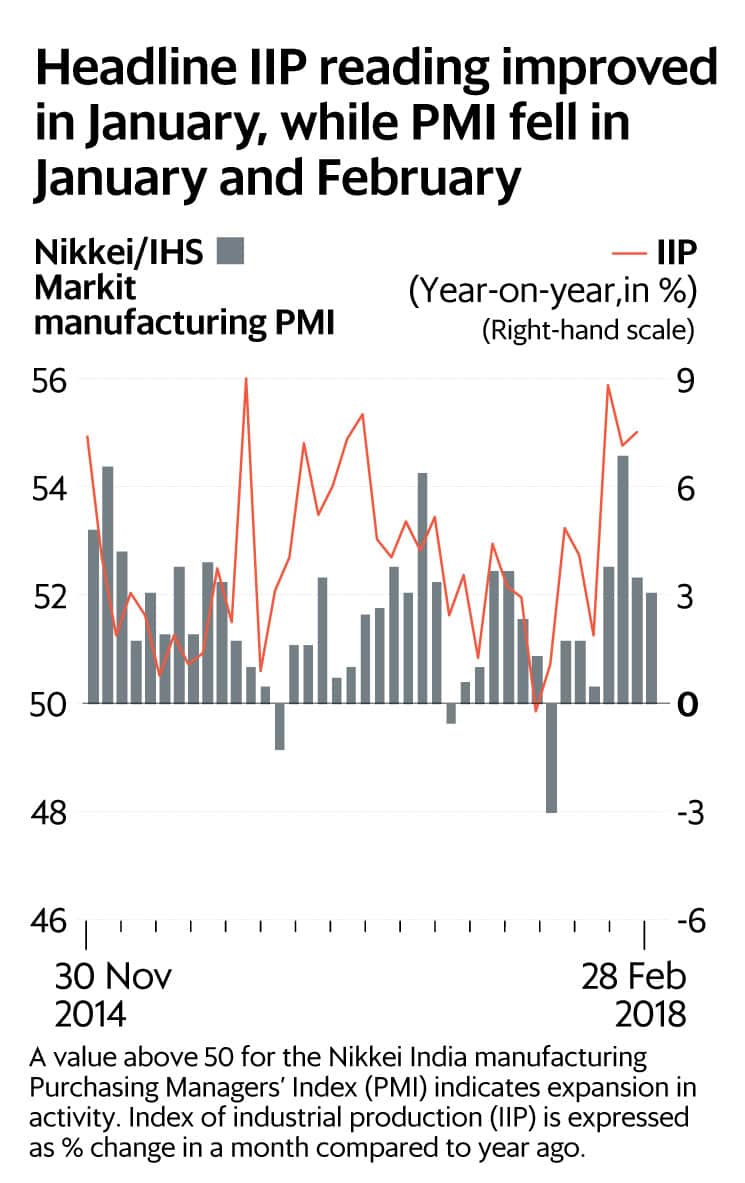 As the chart shows, this is not the first time that the two high-frequency indicators have shown divergent trends.

So, which indicator should you rely on: PMI or IIP?

A Mint analysis suggests that while IIP is a better predictor of quarterly gross domestic product (GDP) growth, the PMI—based on a survey of 400 industrial firms —is a relatively less volatile and perhaps a more reliable gauge of the momentum in the economy.

The main reason why IIP predicts growth in GDP, and in particular, GDP (manufacturing) is that initial estimates of GDP use IIP as a proxy (along with corporate filings) of industrial growth. As such, the two tend to move in tandem.

However, during the second round of revisions which take place after two years, IIP-based estimates are replaced with results from the more comprehensive annual survey of industries (ASI). And then a wide discrepancy between IIP and actual industrial gross value-added emerges, as an earlier Plain Facts column pointed out.

In the case of PMI, it rarely tracks GDP. The average PMI in a quarter and the quarterly headline GDP reading, expressed as percentage change year-over-year, often move in opposite directions in India. This is in contrast to economies such as the US and Switzerland, where the respective manufacturing PMIs tend to move in tandem with GDP growth.

PMI vs GDP across countries

However, the inability of PMI to predict GDP does not necessarily diminish its importance. This is because the methodology to compute India’s GDP statistics, after the revisions in 2014, has attracted a fair amount of criticism and controversy. The new GDP series itself shows negative correlation with other observable metrics of the Indian economy such as bank credit to industry and revenue growth of listed firms.

Thus, it might be useful to track a wide range of leading indicators for cues on the true state of the Indian economy. Besides, the long lag of around two months in releasing quarterly GDP statistics forces economy-watchers and policymakers to track other macroeconomic indicators. The Nikkei India manufacturing PMI, along with IIP, remains the most widely tracked leading indicator for the Indian economy, according to Bloomberg’s economic calendar. Bloomberg measures “relevance" of an indicator according to the number of alerts set by users.

Of the two, PMI might be a more reliable indicator despite its negative correlation with GDP. PMI tends to track observable macroeconomic indicators—such as bank credit growth and revenues of listed firms—more closely compared to IIP. Also, unlike the IIP series which witnesses frequent trend reversals, the PMI series is less volatile.

The manufacturing PMI for India also happens to be less volatile than most other major countries’ PMIs. This is in stark contrast to the IIP series, which is more volatile than the corresponding series of other countries.

Given the volatility of IIP and the problems with GDP estimation, there is a case for tracking a wide range of indicators, including those that are produced by independent agencies. Of these indicators, PMI seems to be among the more relevant ones.