India is changing rapidly in many different ways and its cities are changing even more rapidly. Typically, we find that most new technologies, attitudes, fashions, etc., come about first in the metros, then spread to other larger cities, and eventually encompass the entire urban landscape.

Classifying cities according to their market sizes into four categories, we have 10 alpha cities, which include the four metros and Hyderabad, Bangalore, Ahmedabad, Pune, Surat and Coimbatore, the cities that are the first to adopt change.

Looking at one of these new changes—the emergence of the mall—we find the highest concentration of mall users in these cities. With the largest urban markets, high incomes and nuclear families, these cities have been ideal places to usher in the mall culture in India. 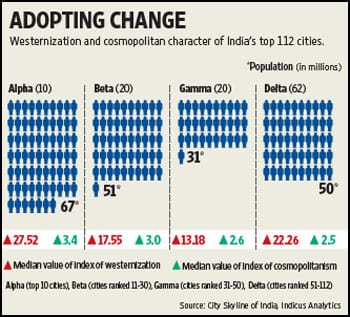 As marketeers look increasingly at small towns, they will need to differentiate between the attributes of cosmopolitanism and westernization. Ahmed Raza Khan / Mint

Similarly, the cosmopolitan character tends to be greater in larger cities, but is not necessarily high in all large cities, where cosmopolitanism is defined in terms of the share of people communicating in different languages—not including English.

Kolkata is a large city, but not as highly cosmopolitan as Nagpur, a beta city. Dhanbad is another gamma city which is not usually thought of as highly westernized or cosmopolitan, yet as the coal capital of India and it attracts people from across the country. Various dialects of Hindi, Bengali, Oriya, etc., are some of the more popular languages there.

As marketeers look increasingly at small towns, they will need to differentiate between the attributes of cosmopolitanism and westernization. Chandigarh, for instance, is quite westernized, but not really a cosmopolitan city. Its markets are, therefore, characterized not only by English signages, but also by a highly homogeneous set of products typically consumed by Hindi- and Punjabi-speaking communities.

Nagpur, on the other hand, has communities that have retained their historical characteristics—Newspapers in Hindi, Gujarati, Oriya, and not just Marathi and English, have significant sales in that city. Surat started off as a predominantly Gujarati city, but large numbers of migrants from the Hindi belt, Orissa and some of the other eastern states are rapidly changing its character. Surat is quickly becoming a cosmopolitan city, but it is neither a highly westernized city nor, given the trends, does it appear that it will become one in the near future.

The economic activity that has pushed the growth of a city has long determined its character. Bangalore’s high human capital-oriented growth required highly educated people from across the country. In the last century, this could only be met through those who had been taught in English. A delta city, Varanasi’s growth also required human capital, but religious tourism required a different kind of expertise, hence despite the presence of Banaras Hindu University, its migrants took on a non-westernized character.

Gurgaon’s high-value manufacturing growth required greater skills, but Dhanbad’s mining activities could welcome those who were uneducated and unskilled. Consequently, the two markets are also highly different. They both have people from different communities and regions, but one set are better educated, better paid and English-speaking; the other, less educated, less paid, and more comfortable with their mother tongues.

Demand Curve is a weekly column by research firmIndicus Analytics Pvt. Ltdon consumer trends and markets. Your comments are welcome at demandcurve@livemint.com