Nayachar, Wesh Bengal: The West Bengal government may not find it easy to relocate a proposed hub for chemical industries from Nandigram to Nayachar, as people are rapidly settling in the island either to protest the project or in the hope of earning compensation, persons familiar with the development said.

The once uninhabited island on the Hooghly river, owned by the state government and administered by its fisheries department, now has some 5,000 settlers. 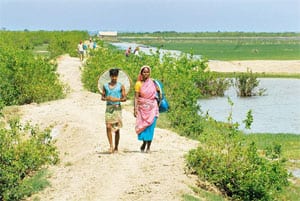 Looking for gains? Settlers on Nayachar island in West Bengal’s East Midnapore district. Most of them were reluctant to say how long they have been living on the island since many had likely migrated there. Indranil Bhoumik / Mint

“There are at least 5,000 people currently living in Nayachar, according to the police, but I can’t say why they have migrated there," said Choten Dhendu Lama, district magistrate of East Midnapore.

The settlers, however, have a different tale to tell. For instance, Bharati Dolui, who two years ago was an activist protesting the industrial hub in Nandigram, settled in Nayachar in January last year.

Dolui, 40, said she would protest setting up the petroleum, chemicals and petrochemical investment region (PCPIR), which the West Bengal government proposes to develop in partnership with Indonesia’s Salim Group and its Indian partner Prasoon Mukherjee.

The state government shelved its plans to build the PCPIR in Nandigram after violent protests in the area led to at least 14 deaths.

It subsequently announced that it would relocate the hub to Nayachar.

They say it would destroy local ecology and displace hundreds of thousands of fishermen, and not only those who live on the island. Various state-run agencies are examining the possible impact of the project on environment.

“We have been mobilizing people for some time. We currently have the support of some 5,000 people in Nayachar," said Subhendu Adhikary, local Trinamool Congress leader and a member of the Lok Sabha. “We are prepared to resist the chemical hub project tooth and nail."

In a recent interview with Mint, Koteshwar Rao, politburo member of Communist Party of India (Maoist), said his party, too, would oppose the proposed PCPIR in Nayachar because of its impact on the environment.

“But it seems people are migrating to Nayachar in the hope that the state government would eventually agree to pay them a handsome compensation for eviction though they have no right to the land on which they have built homes."

Nayachar was chosen as the new site for the chemical hub because the state government thought only a handful of people would be displaced by the project. There were less than 100 families living on the island when the government made its announcement.

But there are now at least 1,000 houses in Nayachar and more are being built, said Raj Kanojia, inspector general of police, law and order. “People are coming from either the Nandigram-Khejuri region or from South 24 Parganas for obvious political reasons," he said. “We are keeping a close watch on Nayachar."

Those who have migrated to Nayachar catch fish for a living, earning around Rs2,000 a month, according to the local people.

Jurong Consultants Pte Ltd of Singapore has been asked to conduct the feasibility study for NKID.

Unitech recently sold its 40% stake in NKID to the Salim Group and Mukherjee’s Universal Success Enterprises Ltd, according to news reports.

Land acquisition has seen strong protests elsewhere in West Bengal. Tata Motors Ltd, which was building a factory to manufacture its Nano small car in Singur in Hooghly district, relocated its plant to Sanand in Gujarat following local opposition.