Dubai: Iran unveiled upgrades to six weapons on Tuesday, including a more accurate short-range missile and a more powerful naval engine, Iranian media reported, in what seemed to be its latest response to international pressure over its nuclear programme.

The hardware was presented at a ceremony marking Defence Industry Day and attended by President Mahmoud Ahmadinejad and defence minister Ahmad Vahidi.

Iran says it could hit Israel and US bases in the region if it comes under attack. 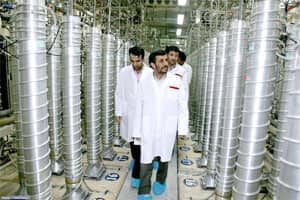 Ahmadinejad said on Tuesday that Iran’s military advances are purely for defensive purposes and should not be taken as a threat, but said they would dissuade world powers from imposing their will on Iran.

“Defensive advances are meant to defend human integrity, and are not meant to be offensive moves toward others," Ahmadinejad said, according to Mehr news agency.

“I have no doubt that our defensive capabilities can stand up to bullying and put a halt to their plans."

The US has also not ruled out military action against Iran, but says the priority of world powers remains the use of diplomacy and sanctions to rein in its nuclear activity.

Among the upgrades was a fourth generation of the Fateh-110 missile, which boasts a range of about 300km.

Iran said earlier in August that it had successfully test-fired the new model and that it was equipped with a more accurate guidance system.

“This missile is one of the most precise and advanced land-to-land ballistic missiles using solid fuel," Vahidi was quoted as saying by Fars news agency. “In the last decade, it has had a significant role in promoting the Islamic Republic of Iran’s defence capabilities."

“The Fateh-110 has a crude guidance and control system that operates during the missile’s ascent" rather than during final descent, said Michael Elleman, senior fellow for missile defence at the International Institute for Strategic Studies.

“The Fateh-110 appears to lack the subsystems needed to effect terminal steering," he said in an email.

Vahidi said it was named after the daughter of Dariush Rezaeinejad, an Iranian scientist who was shot dead in 2011.

Iran believes agents working with foreign intelligence services, including the American CIA and Israel’s Mossad, are behind the assassinations of several of its nuclear scientists. Reuters