As the milk glut intensifies, farmer protests are likely to spill over

Together with large stocks of sugar and higher planting of sugar cane, the surplus situation in Indian agriculture is set to worsen, fuelling another round of farmer protests as states like Madhya Pradesh, Chattisgarh and Rajasthan goes to polls

Pune/New Delhi: Karan Ramdas Atole’s dairy farm is a neat brown square of cleared ground surrounded by lush green sugarcane fields. A mechanical engineer by training, 25-year-old Atole took a loan of ₹ 2 million to set up the farm in his native village in Pune district of Maharashtra. That was in June last year when cow milk sold for ₹ 25 a litre.

Driven by excess supplies and stalled exports of milk powder, prices collapsed to a low of ₹ 17 per litre—less than what it costs to buy a bottle of drinking water.

Atole defaulted on his loan repayment in May.

So, on 16 July when a farmer union from Maharashtra called a strike to stop milk supplies to major cities Atole did his part. As farmers from the prosperous sugarcane growing areas of western Maharashtra stopped milk vans and poured milk on highways—some even took a bath with milk to draw the government’s attention— Atole distributed milk for free among the poor. The four-day strike by the Swabhimani Shetkari Sanghatana led by Member of Parliament Raju Shetti forced the government to raise the procurement price to ₹ 25 per litre on 19 July. This is still less than the ₹ 32-35 it costs a farmer to produce a litre of cow milk. 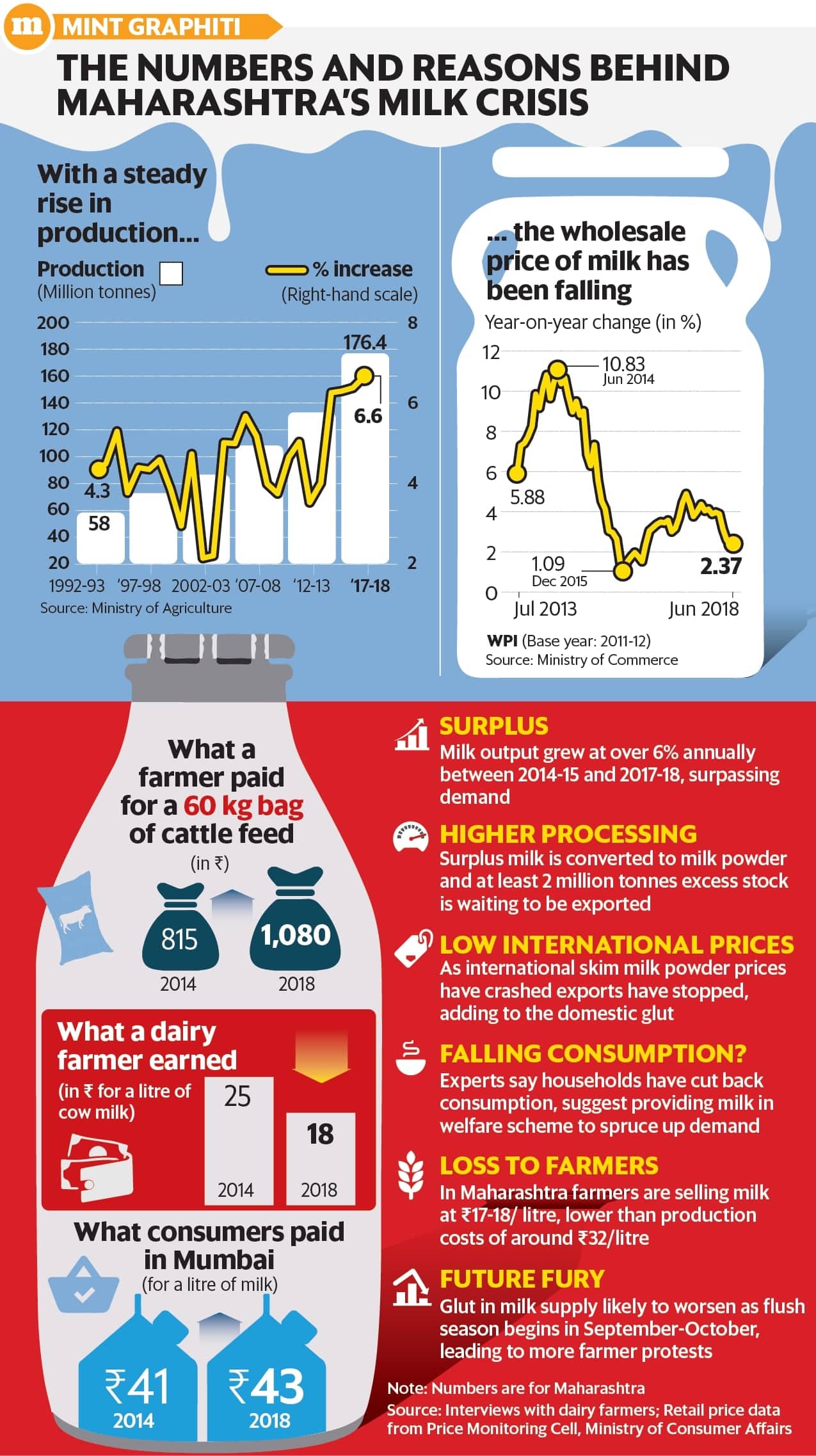 The state promised to pay diary companies a subsidy of ₹ 5 every litre of milk they convert into skim milk powder (SMP) which can be stored away. But Atole is not sure if the relief will come by with local dairies arguing that they do not have SMP plants. The state government which initially promised higher prices from 21 July has since extended the date to 1 August.

“I mortgaged part of our family land... and for three months straight defaulted on repayments," Atole said standing under the giant shed of his cattle farm. His herd size of eleven high yielding Holstein Fresian cows has not grown since last year and the shed looked sparse. 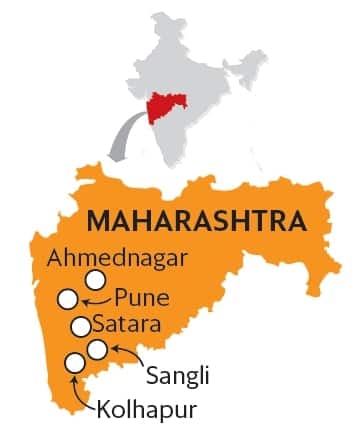 We (farmers) will show them their place in the next elections," Atole mutters threateningly. In less than three months from now, in October, as farmers begin their Kharif harvests of grains and pulses, farm gate crop prices may plunge further. This is also the flush season for milk, with production peaking with the approaching winter.

Together with large stocks of sugar and higher planting of sugar cane, the surplus situation in Indian agriculture is set to worsen, fuelling another round of farmer protests as states like Madhya Pradesh, Chattisgarh and Rajasthan goes to polls. Atole will get a chance to cast his vote when general elections are held in less than a year.

“It is unlikely that dairy farmers in Maharashtra will receive the promised ₹ 25 per litre as the government is expecting that processing units will pay farmers from retail sales realisation of ₹ 42 per litre... while the subsidy is meant only for milk powder manufacturers, and that too for just three months," said Ajit Nawale, state secretary of All India Kisan Sabha, the farmer’s wing of Communist Party of India (Marxist).

“In the next few months stocks of SMP is going to grow, and even rot... when milk production reaches its peak by October so will the agony of the farmer. This is likely to intensify protests not just in Maharashtra but also in other states," said Nawale, who was instrumental in organising a long march of farmers to the state capital of Mumbai in March this year.

What drove the current crisis in milk? According to Hetal Gandhi, director at Crisil Research, the problem is largely due to milk production growing at over 6% in the past few years, surpassing demand for packaged milk, which led to a fall in procurement prices.

Data from the agriculture ministry shows that from 2014-15 to 2017-18, milk production in India—the world’s largest producer-- grew from 146 million tonnes to 176 million tonnes, a CAGR of over 6.4% over this period. In Maharashtra, which contributes just 6.3% to India’s annual production, currently 13 million litres of milk is procured from farmers daily. Of this, 7 million litres is packaged and sold to consumers as liquid milk while the rest goes into making value added products like butter and ghee, or stored as powder.

“India’s milk production during lean summer months between March and June did not dip significantly in recent years compared to how it did earlier... in Maharashtra procurement prices dropped sharply as the industry is largely driven by private players who were unwilling to procure," Gandhi said. She added that between July and December average procurement prices are likely to be about 20% lower than last year’s level as the flush season begins.

Did lower skim milk powder (SMP) prices in the international market contribute to the current crisis? Dairy units currently have a stock of at least 2,00,000 tonnes of SMP, which they are unable to export as global prices fell from a high of US$ 3,519 per tonne in July 2014 to US$ 1,959 in July 2018. It costs between ₹ 200-230 to produce a kilo of SMP in India, compared to ₹ 120 per kg that Indian milk powder is fetching in international markets.

Dairy units are therefore unwilling to procure excess milk and convert it into SMP—this lower procurement demand is leading to a sharp fall in prices.

Even with export subsidies of ₹ 50 per kg provided by states governments of Gujarat and Maharashtra, and the federal government’s 10% export incentives, exports are currently unviable.

“India’s SMP stocks are equivalent to 8-9 months of domestic consumption, but when converted to liquid milk this will be sufficient for just half a month’s consumption... so blaming SMP stocks for lower (domestic) prices is somewhat overblown. The problem is surplus production," Gandhi said.

The story of Nilesh Jagtap—a young entrepreneur who set up a milk processing plant in Pune’s Baramati taluka—mirrors the crisis faced by farmers like Atole. The only difference: his liabilities are much larger. Jagtap took a loan of ₹ 2.75 crore and invested another ₹ 2 crore earned from the family’s construction business to set up the plant in 2016. Today Jagtap is operating the plant at one-sixth of capacity, scrounging to repay the ₹ 5 lakh due to banks every month.

“I should not have strayed into milk but it was a childhood dream... now it is too risky and there is too much competition," Jagtap said, adding, “Maharashtra has hundreds of private dairies with their own brands and most are struggling to make money."

The result? To push his own brand Jagtap has to offer higher margins to dealers and retailers—between ₹ 15-20 per litre of processed milk—while the farmer gets a raw deal. Across India, established dairy companies have expanded their capacities, leading to higher processing of milk which in turn contributed to the present surplus, say experts.

Data from Crisil Research shows that capital expenditure for around 60 to 70 listed and unlisted dairy companies increased by over 65% in the three year period between 2016 and 2018, over the cumulative expenditure during 2013-2015. According to Nitin Puri, head of food and agribusiness research at YES Bank, investments in milk processing has grown over the past few years and is estimated at over ₹ 5,000 crore annually.

“But till companies come up with new product lines and add value to liquid milk, the surplus problem will persist... to resolve the current crisis it makes sense to supply the surplus in welfare programs for children like mid day meal schemes," Puri said.

The surplus story has a counterpoint too. “It is not that milk production has surged for the first time (output, for instance grew at over 5% per year between 2004 and 2008)... but plunging prices indicate that households have cut back consumption," said Himanshu, associate professor of economics at Jawaharlal Nehru University, Delhi.

“There is definitely a drop in demand... so the glut in pulses and falling wholesale prices is playing out in milk too, hitting farmer incomes," he said.

No one knows this better than 45-year-old Ganesh Barge. In Baramati’s Malegaon village, Barge owns a herd of 25 Holstein Friesian cows of which 14 are in-milk. The farm costs him ₹ 4,270 per day to pay for feed, labour, electricity, medicines and rental costs. At 180 litres per day milk collection he earns ₹ 3,240 (calculated at ₹ 18 per litre)—or a daily loss of ₹ 1,030.

With discontent among dairy farmers rife in states like Maharashtra, the Karnataka model stands out as a possible solution. Karnataka is among the top five producing states in India.

Production of milk grew as the state government announced a ₹ 5 per litre direct subsidy to dairy farmers over and above the ₹ 21-28 they receive from milk co-ops.

To deal with the surplus milk situation the state government launched a Ksheera Bhagya scheme in August 2013 to provide free milk to school-going children.

Under the scheme, the state now provides 150 ml milk daily for five days in a week to over 9 million children in public schools and anganwadis (state run day-care) centres. According to KMF, every day 7,00,000 litres of milk is converted into milk powder and delivered to beneficiary institutions across the state for Ksheera Bhagya.

“Procurement (supply) has increased due to the incentive of ₹ 5 given directly to farmers... and this is compensated with the Ksheera Bhagya programme bringing about a balance (on the demand side)," a senior official from KMF said, requesting not to be named.

What’s more: at ₹ 35 a litre, retail milk prices in Karnataka are among the lowest in the country.

Sharan Poovanna from Bengaluru contributed to this story.