Will meet fiscal deficit target of 3.9%, CEA Arvind Subramanian says, but warns that 3.5% target for 2016-17 may be challenging

New Delhi: In a candid assessment, the finance ministry said while the going has been good for the economy so far, tough times lie ahead.

In the mid-year economic review released on Friday, it scaled down the growth projection of the economy to 7-7.5% in the current fiscal, as opposed to 8-8.5% forecast in February.

The review cited weak demand as the central challenge facing the Indian economy; it also pointed out that macroeconomic cushions, such as falling international oil prices, would no longer be available. 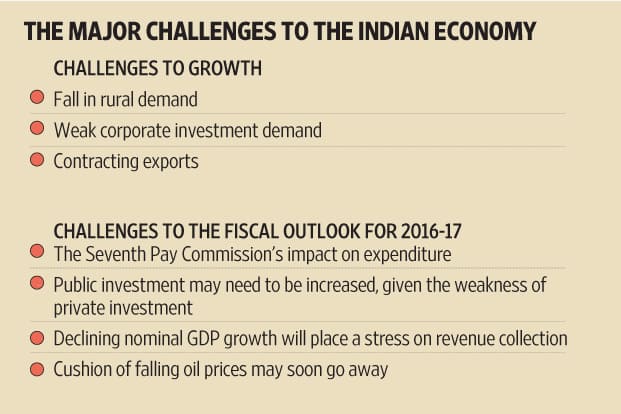 Given the additional expenditure on account of the Seventh Pay Commission’s recommendations, the finance ministry made out a case for relaxing fiscal deficit targets for next year.

The review sounded a note of caution, saying that the Indian economy’s growth in 2016-17 is likely to mirror this year’s performance, as private investment pickup remains slow, the stress on corporate balance sheets continues, exports continue to shrink and the cushion from falling oil prices recedes.

Significantly, the finance ministry has signalled a relaxation of fiscal deficit targets as rising expenditure due to the Seventh Pay Commission recommendations and lower revenues on account of falling nominal gross domestic product (GDP) growth put pressure on government finances.

“If the government sticks to the path of fiscal consolidation, that would further detract from demand. Data uncertainty and the mixed signals sent by the economy suggest that more attention should be paid to the demand side of the economy. The sharp and continuing decline in the nominal GDP growth as well as the fact that the economy is powered only by private consumption and public investment is a cause of concern," the review said.

It pointed out that the recovery in growth has been uneven and there is need for private sector investment and revival in exports for sustainable and rapid medium-term growth.

The Indian economy grew at 7.4% in the second quarter of the financial year, up from 7.1% in the first quarter.

Addressing a press conference, Arvind Subramanian, chief economic adviser in the finance ministry, reiterated that the government will meet its fiscal deficit target of 3.9% for 2015-16 but warned that the target of 3.5% for 2016-17 will be more challenging.

He also made a case for relaxing the deficit targets for 2016-17.

Subramanian pointed out that the Seventh Pay Commission recommendations are expected to add an additional 0.65% of GDP to total expenditure. In addition, the government may have to continue with public investment, given the continuing weakness in private investment. Also, the subsidy gains from declining international prices will not be available and the decline in nominal GDP growth will put pressure on revenue collections.

“It is in this context that the government’s commitment to further fiscal consolidation of 0.4% of GDP needs to be reassessed," the review said.

Subramanian added that both the government and the Reserve Bank of India (RBI) will have to sit together to see what the fiscal and monetary policy choices should be in a declining nominal GDP situation.

“Declining nominal GDP growth and the challenges to the outlook for real GDP growth raise questions about the appropriate role of fiscal and monetary policy," the review said.

It warned that the sharp decline in nominal GDP growth as well as the weak demand outlook could further intensify corporate debt and impede revival of investment.

It articulated the need to continue with economic reforms, including banking sector reforms, the goods and services tax, a bankruptcy code and advocated measures to boost agriculture output.

Subramanian said the agriculture sector, battling two successive years of drought, needs to be one of the government’s key focus areas.

On the positive side, the report said India’s price and external sector outlook are manageable. Low global commodity and oil prices and falling domestic demand are expected to help keep inflation in check.

On the external front, the rupee remains one of the best performing currencies against the dollar and the economy is geared to absorb any volatility from the actions of the US Federal Reserve to normalize monetary policy. Going forward, exports could recover as global demand picks up, the review said. Indian exports have fallen sharply over the past one year, contracting for the 12th consecutive month in November.

Pronab Sen, chairman of the National Statistical Commission, said the demand side is a problem but public investment will only solve the problem to a limited extent.

“Rather than focusing excessively on the fiscal deficit number, what is important is the nature of the public spending. For instance, higher expenditure on account of the Seventh Pay Commission will hardly have any multiplier effect on the economy. But if it is made in crucial sectors like infrastructure, the impact will be more," he added.