World Bank study calls for policies that make refugees independent, allowing them to seek employment rather than just providing aid

New Delhi: Refugees are often seen as harbingers of socioeconomic instability in host countries. A World Bank report, ‘Forcibly Displaced: Toward a New Development Approach Supporting Refugees, the Internally Displaced, and their Hosts’, which was released on Thursday, suggests that such a view could be rooted more in prejudice than facts.

Consider these facts, cited in the report. Over the last 25 years, hosting refugees may have contributed to causing conflict in only eight out of 991 country-year episodes, and in each case, the country was already on the brink of conflict. Even the economic story is not very different. Refugees typically represent less than 1% of the population of host countries and their impact on economic performance is more muted than factors such as changes in oil prices.

Actually, blaming refugees for the poor economic performance of host countries could be a case of putting the cart before the horse. Countries that have the biggest number of refugees in the world are already backward in terms of their business environment and incomes. Of the 10 largest refugee-hosting countries in 2015, all but one were in the bottom half of the World Bank’s Ease of Doing Business index. The average rank in Ease of Doing Business for the 10 largest countries with Internally Displaced People (IDP)—people displaced within their countries—was 148 out of 189.

The number of IDP is much greater than refugees. At the end of 2015, there were 41 million IDPs against 24 million refugees and asylum seekers, as per United Nations Refugee Agency statistics. 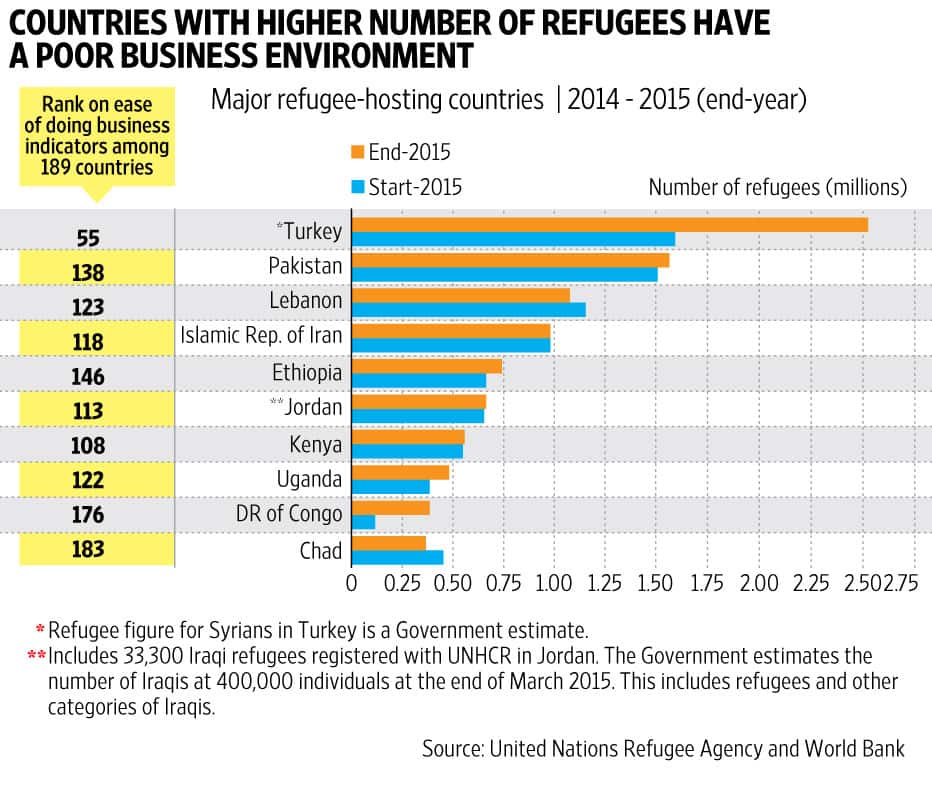 Much of the recent commentary on the refugee crisis has, however, been focused around the increased inflow of refugees to European countries, which are far more developed than those cited above. In June this year, the Pew Research Center pointed out that the number of detected illegal border crossings in Europe was at an all-time high and many countries of Europe had experienced an increase in the share of foreign-born population. A lot of people have tried to link the refugee crisis with a spate of terror attacks and other civic disturbances in Europe. These conditions were also influencing opinion across the Atlantic, with 53% of Americans voting against taking in Syrian refugees after the 2015 Islamic State attacks in Paris, and an additional 11% opining that only Christian refugees should be taken, the Pew Research Center pointed out.

The refugee problem in Europe does not seem as acute as it is made out to be when seen in a slightly longer time horizon. The World Bank report cites statistics from the United Nations Refugee Agency to show that although the refugee influx might be on an upward trajectory, it is by no means the biggest in the advanced world. The number of refugees in high-income countries today is much less than what it was in the 1990s. 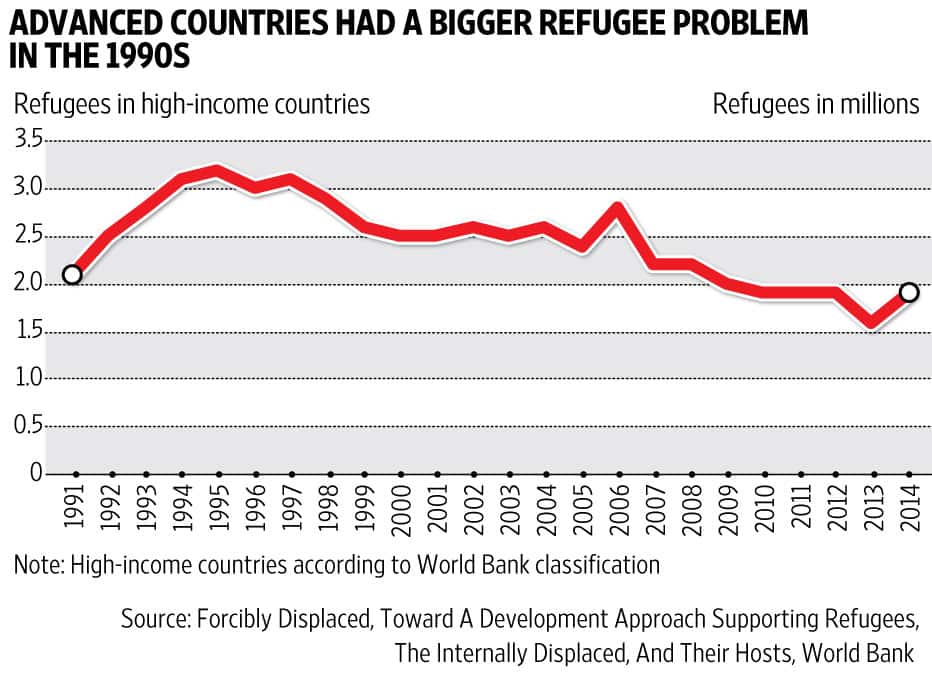 The preceding charts suggest caution in taking the hype and paranoia being created in advanced countries around the refugee crisis at face value.

None of this, however, takes away the fact that refugees as well as IDPs have to face a lot of hardship and economic uncertainty after being forcibly displaced. What is even more worrying is that once a person becomes a refugee, chances of a return to the earlier life are not very bright. Just about one-fourth of those who exited refugee status over the last six years returned back to their home countries. A large number of IDP also do not go back to their original places and resettle in urban areas, due to a mix of security and economic reasons. Even those who return might be forced to flee again. The report notes that of the 15 largest episodes of return, one in three was followed by a new round of fighting within a couple of years, which suggests either a premature return or fragile recovery.

There is another important finding. Evidence of Liberian refugees in Ghana suggests that better-off refugees, with better access to resources, skills and networks are keener to return as they have a better chance of starting their lives afresh. The attitude of host countries to refugees could be of crucial importance in determining these endowments. Countries which allow refugees to participate in economic activities have a better chance of them returning. The policy makes economic sense too. Billions of dollars have to be spent on sustaining refugees because they are not allowed to become independent.

As one of its recommendations towards longer-term solutions to the refugee crisis, this is what the World Bank says: “Development actors should support efforts to transform camps into settlements. They should also work with other partners to enhance the way assistance is provided so as to gradually reduce dependency—for example by strengthening targeting, supporting people in rejoining the labour force, and building capacity to allow for a gradual shift to country systems".

These are exactly the things countries are wary of when hosting refugees. It is generally believed that giving greater freedom to refugees could increase rather than decrease their number in individual countries. The global response to the refugee crisis might just be another case of misguided policy where crucial actors err because the whole is not the sum of the parts.