Ralegan Siddhi: Encouraged by the Prime Minister’s latest letter to him, Anna Hazare has promised to work with Congress if the UPA government ensures that a strong Lokpal Bill is passed in the Winter session of Parliament and brings in other reforms.

At the same tine, he sent out a warning to the ruling party that if the Lokpal Bill was not passed in the Winter session he will work against Congress in the coming assembly elections in Uttar Pradesh and four other states like in Hisar. 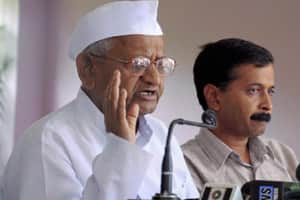 “If the government brings a strong Lokpal and keeps its other promises, why should I oppose the Congress. In fact we will work with the Congress," he said, referring to the Lokpal Bill and to electoral reforms including right to reject, decentralisation and more powers to gram sabhas.

Seeking to dispel the notion that Team Anna is anti-Congress, he denied that they had campaigned against Congress in Hisar at the behest of BJP and RSS.

“I have only seen him (RSS chief Mohan Bhagwat) on TV, I have never met him or spoken to him. These are all allegations. In politics political parties are ready to do anything. The Congress, BJP and RSS are together conspiring to defame Anna. I have nothing to do with the RSS or BJP," Hazare said.

In his 10 October letter to Hazare, the Prime Minister had declared government’s commitment to a strong Lokpal while saying that his demand for ‘Right to Reject´ provision in electoral law needs political consensus.

Hazare made light of Congress leader Digvijay Singh’s claim that he was being set up as a Presidential candidate in 2012.

He said the Congress and BJP were shooting in the dark by spreading such rumours.

Hazare denied that that he had received any letter from the RSS. “I don’t even recognise Ram Madhav," he said when asked why the RSS leader was allowed on stage during the Jantar Mantar agitation.

He said he had never thanked BJP president Nitin Gadkari for the BJP’s support. “If someone else from my team did, I can’t say."

In a rebuff to Team Anna member Prashant Bhushan, Hazare said he has completely disassociated himself with his remarks on Kashmir.

“I am against anybody who talks about dividing the country. I am very uncomfortable with what Bhushan has said. Our core committee will meet to decide on his continuing as a team member. After it meets. I will take a decision."

He said he would tell his colleagues not to exceed their brief and speak on each and every issue.