Before his speech at the opening plenary of WEF Davos 2018, PM Narendra Modi hosted select CEOs over dinner at the Congress Centre in the Swiss ski town

Taking up from Monday’s introduction to the culinary back room, I had a conversation with chef Raghu Deora of Taj Mumbai. An old Davos hand, he revealed that 35 personnel were handpicked from across various Taj properties in the country—the criteria was a specific skill set. Further, each had to sacrifice 10kg of their personal baggage allowance to create space for food stuff for the various events; talk of commitment! Over and above this, one tonne in masala and cooking equipment have been shipped to Davos. Of course the vegetables and meat have been procured locally.

Last night the India reception at the Congress Centre and the dinner hosted by the prime minister for select CEOs too was catered by Taj. As they say, the way to a person’s heart is through their stomach. The fare on offer was awesome—a 12-course meal. 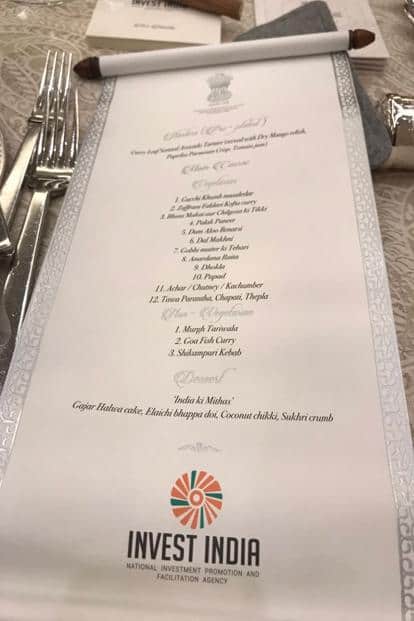 For vegetarians, there was a choice of Zaffrani Faldari Kofta curry, Dum Aloo Benarsi and Bhuni Makai aur Chilgoza ki Tikki. For non-vegetarians, there were, among other dishes, Goan fish curry, Murgh Tariwala and Shikampuri Kebab

The relentless snow and consequent dislocation have thrown a spanner in the works of the normally impeccable schedule of the World Economic Forum this year. Even PM Narendra Modi had to make adjustments for mother nature’s snow fury. Initially he was to board a chopper after landing in Zurich; this was shelved given the weather conditions and the prime minister’s convoy laboured four hours to reach Davos.

Immediately after launching the WEF, Modi turned up to greet 30-40 Indian CEOs present at Davos. The prime minister was visibly relaxed and engaged in friendly banter, including a dipstick survey on his speech. According to him, there was a query made to him about the problem of inequality: “I am being asked as to how come 70% of the wealth is held by 1% of the population."

Later, alluding to his government’s tenure, he said, “Mujhe toh ab teen se chaar saal hue hain; agar 70 saal mile to kya kya ho jayega." (I have been at the helm for only three-four years, imagine what all would happen if I get 70 years.)

In the middle of a friendly banter with about 30-40 Indian CEOs, PM Modi unambiguously signalled the ideological foundations of the upcoming union budget. “All of you are pleased with me right now, but let us see what you say after presentation of the budget."