Inflation based on Wholesale Price Index (WPI) rose to 1.62% in June from 0.79% in May after turning positive in April

Data released by the Department of Industrial Policy and Promotion showed WPI-based inflation quickened to 1.62% in June from 0.79% in May, after turning positive in April. 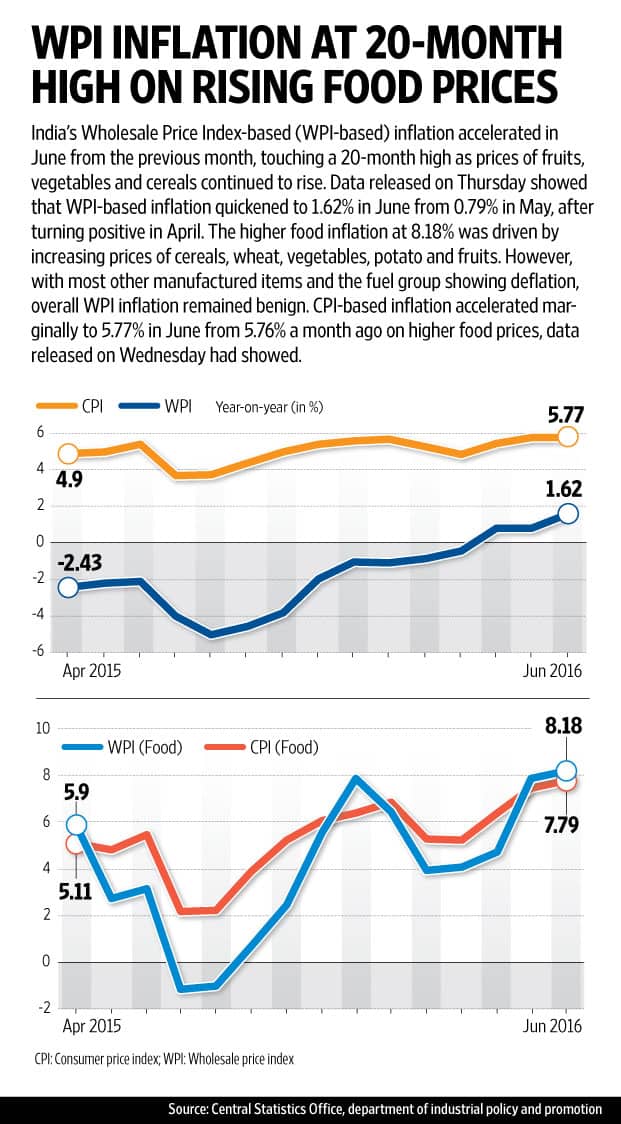 The higher food inflation at 8.18% was driven by increasing prices of cereals (6.32%), wheat (6.83%), vegetables (16.91%), potato (64.48%) and fruits (5.97%). Some manufactured products also showed an upward pricing pressure in June with the prices of food products (8.35%) and sugar (26.09%) rising at a faster pace, compared with the same period last year. However, with most other manufactured items and the fuel group showing deflation, overall WPI inflation remained benign.

India Ratings and Research in a note said it is difficult to say whether the escalation in cereal prices is a temporary response to delayed sowing or whether something else has led to the sudden spike in the prices of cereals. “In either case, a close watch on the cereals prices is warranted and timely market intervention by the government could correct this, given the stock of cereals with the government," it added.

Yes Bank chief economist Shubhada Rao said notwithstanding a negative output gap in the economy and the anticipated disinflation in food prices after the arrival of the kharif crop, the ongoing improvement in domestic demand in the backdrop of a gradual uptick in global commodity prices leads her to believe WPI inflation for FY17 could see a higher print than anticipated. “We now expect FY17 WPI to average 3.5% as compared with our earlier projection of 2.5%, albeit lower than long-term average of 5.4%—a sign of sub-optimal growth in the economy," she said.

The India Meteorological Department on Thursday said the southwest monsoon has covered the entire country and that total rainfall is now 2% surplus since the season began in June.

CPI-based inflation accelerated marginally to 5.77% in June from 5.76% a month ago on higher food prices, data released by the Central Statistics Office on Wednesday showed.

In its June monetary policy review, RBI said an upside inflation surprise in April to 5.39% made the trajectory of inflation somewhat more uncertain.

“The expectations of a normal monsoon and a reasonable spatial and temporal distribution of rainfall, along with various supply management measures and the introduction of the electronic national agriculture market (e-NAM) trading portal, should moderate unanticipated flares of food inflation.

In addition, capacity utilization indicators suggest that the available headroom in industry could keep output prices subdued even as demand picks up," it said.

However, RBI cautioned on upside risks, including “firming international commodity prices, particularly of crude oil; and the implementation of the 7th Central Pay Commission awards which will have to be factored into projections as soon as clarity on implementation emerges".

The government has accepted the recommendations of the pay panel announcing implementation from August. However, it has deferred a decision on increasing housing rent allowances, which is expected to keep retail inflation under check.