Across the world, water stress is a gendered burden, with women largely bearing the responsibility of collecting water

The crisis in Latur in Maharashtra’s Marathwada region where the collector has banned an assembly of more than five people is a stark reminder of India’s water crisis. A recent study said that about 80% of India’s 1.25 billion population faces severe water scarcity for at least a month every year and 180 million Indians face severe water scarcity all year round. The burden of this falls disproportionately on the marginalized sections of the society, including women. On the occasion of World Water Day, we bring you five charts that show how women suffer the most from water stress. 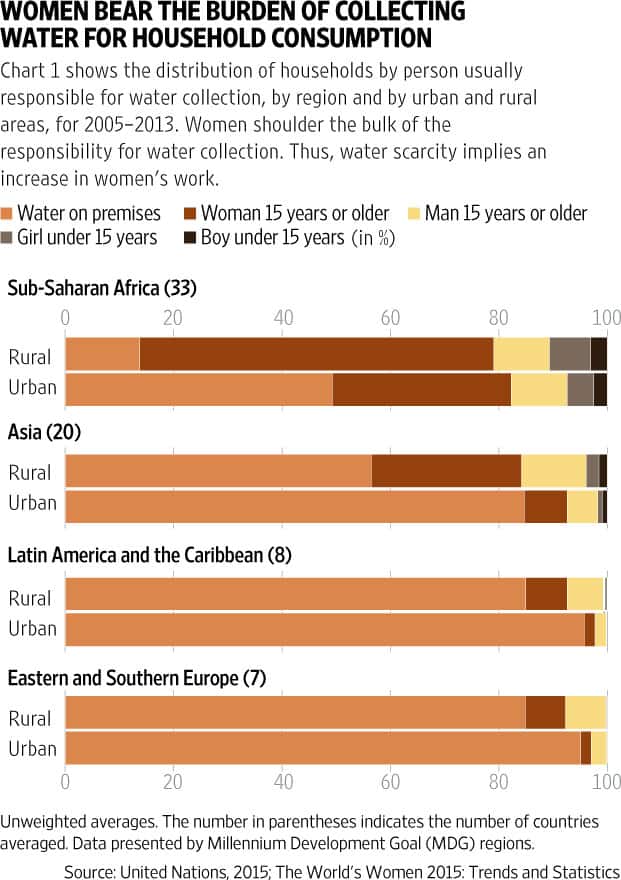 Across the world, this is a gendered burden, with women largely bearing the responsibility of collecting water. With several states in India declaring drought in the last two years, it is inevitable that women’s burden has increased. Uma Aslekar, who works with Acwadam, an NGO involved in aquifer management, in the Marathwada and Vidarbha regions of Maharashtra, argues that water stress in the last five years has forced women to become the primary breadwinners in their families.

Women are “bearing both the burden of the household duties and earning the primary income. In some villages, like Denganmal, it has become the norm to have ‘water wives’, or multiple wives to fetch water. On the other hand, in some water-stressed villages, it has become hard for the men to find wives as no one wants to marry into a life of drudgery," she explains.

How does water stress impact women agriculturists? Meena Bilgi, a member of the steering committee of the Gender and Water Alliance, points out that women perform the primary duties of animal husbandry. “A significant part of this work is about fetching water for cattle, or guiding cattle to clean water sources. This work is primarily done by women, girls and elderly men and women. Girls often drop out of school because they have to take care of the cattle. To get a good supply of milk, they have to make sure the cattle has enough water to drink, so any increase in water stress will directly affect their income," she explains.

Women travel long distances not only to fetch drinking water, but also for sanitation purposes. It is estimated that one in three women worldwide risk shame, disease, harassment and even attack because they have nowhere safe to go due to lack of toilets.

According to international charity organization WaterAid that works to improve access to safe water, hygiene and sanitation, women and girls living without any toilets spend 97 billion hours each year finding a place to go. Access to clean water and sanitation facilities is associated not only with better health outcomes, but also greater safety for women. Media reports quoted a senior police officer in Bihar who said that about 400 women in the state would have escaped rape in 2012 if they had toilets in their homes.

Though final data is still awaited, India is expected to miss the millennium development goal of reducing the share of households without sanitation facility to 38.09% (a government report last year put the current status at about 47.31%). Lack of toilets in schools is also cited as a reason for girls dropping out after they hit puberty.

3. The long walk to water In India, women spend about 150 million work days every year fetching and carrying water, equivalent to a national loss of income of ₹ 1,000 crore or $160 million. Not only is this a huge loss to women’s income, but this time could be better invested in education or child care. Abhishek Varier, who works with the Visakha Jilla Nava Nirman Samithi, an NGO funded by Arghyam and Frank Water, points out that he has seen an increase in school enrolment rates when access to water improves.

Varier’s statement is borne out by a World Bank research paper by Gayatri Koolwal and Dominique van de Walle, which found that in countries with large gender gaps in schooling, school enrolment improved for both boys and girls when there was a reduction in the distance women had to travel to fetch water. The study found that a one-hour reduction in the time taken to fetch water would increase girls’ and boys’ enrolment rates by about 8-9% in Yemen and 18-19% in Pakistan.

A 2013 paper by Sheetal Sekhri, associate professor at the department of economics in the University of Virginia, analysed literacy levels in villages in Uttar Pradesh and found that female literacy rates were higher in villages closer to water sources.

4. No escape for urban women, either 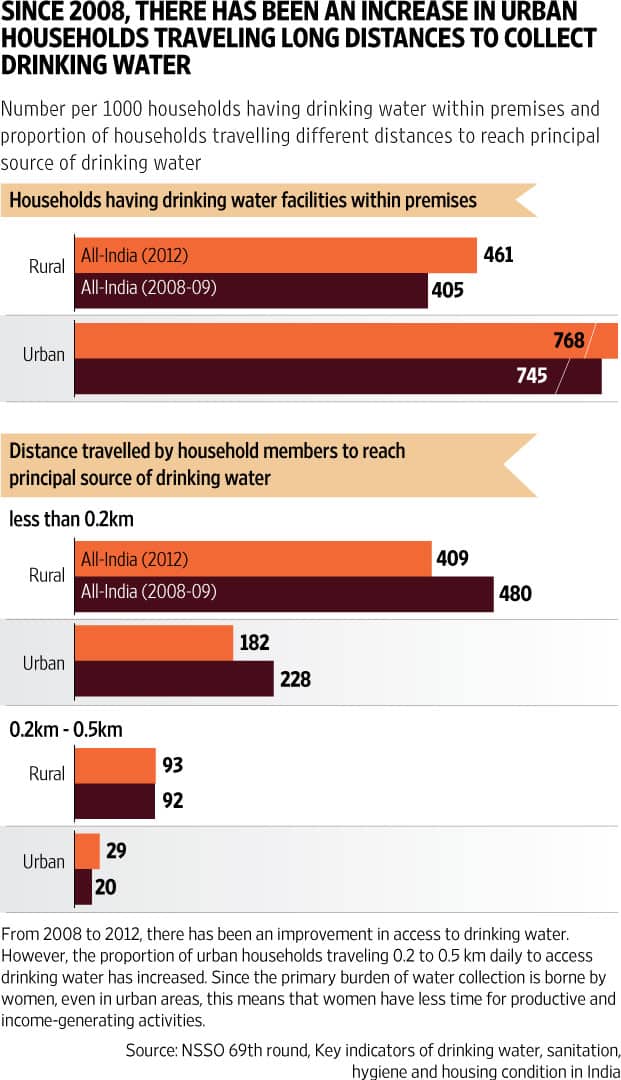 Data from the National Sample Survey Office (NSSO) show that in urban India, the proportion of households travelling 0.2km to 0.5km daily to access drinking water has increased from 2008 to 2012. S. Vishwanath, an expert in urban planning and water issues at Bangalore-based Biome Environmental Solutions, argues that this reflects the fast growth in lower-income population in Indian cities.

“The water infrastructure is simply unable to keep up with the growth in population. Earlier, the poor used groundwater sources but now this is in decline. Also, the distance travelled to access water would fluctuate seasonally, increasing in summer months. Since very few Indian cities have 24x7 water supply, access to water is determined by storage facilities, particularly in summer months when households become dependent on tanker water supply to survive. Access to sanitation and water is very poor for lower-income migrants; community toilets are in very poor condition," he said, adding that Indian cities have no provision for storage in water supply design. The International Fund for Agricultural Development (IFAD) has argued that the lack of gender disaggregated data is one of the main reasons for “the gap between policy commitments on water and gender and actual practice".

Locally, the India Human Development Survey (IHDS), jointly organized by the University of Maryland and the National Council of Applied Economic Research, provides some gender disaggregated data (data from the latest survey is yet to be released). The IHDS 2004-05 noted that women (66 minutes) and girls (12 minutes) spend almost double the amount of time spent by men (29 minutes) and boys (7 minutes) fetching water daily.