New Delhi: Former telecom minister A. Raja and ex-telecom secretary Siddharth Behura will be summoned to depose before the joint parliamentary committee (JPC) examining the 2G scam. “We have decided to call Raja and Behura.... While the date for Raja’s appearance is not yet decided, Behura will be summoned on April 11," JPC chairman P. C. Chacko told PTI on Wednesday after the committee’s meeting. 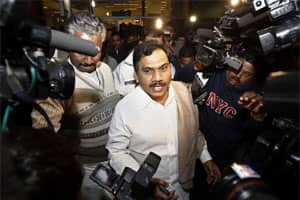 Sources said the JPC decided to summon Raja as it wanted to find out the alleged “illegality" committed by the former telecom minister. “Some officials who appeared before the committee have agreed that Raja followed the advice of DoT (Department of Telecom) and officials in deciding on the first-come-first-served policy, the procedure to be adopted and vetting of applications. Therefore it is necessary to find out the illegality committed by him," a member said.

The committee on Wednesday grilled former telecom secretary D. S. Mathur who held the position between July 2006 and February, 2007. Mathur is learnt to have told the committee that Raja followed the advice of DoT and its officials on several issues.

Behura was arrested on2 February last year by the CBI along with Raja and his personal secretary R. K. Chandolia on charges of cheating, forgery, criminal conspiracy and criminal misconduct.