The regulator is working on an entrance test, modelled on the SAT, to be rolled out first in Asian countries

New Delhi: The apex technical education regulator is seeking to attract more overseas students to enrol in domestic business schools, seeking to diversify the student mix on local campuses and adding a new strand to the Indian education narrative that’s traditionally been about the flow of Indian students abroad.

Accordingly, the All India Council of Technical Education (AICTE) is working to prepare a management entrance test modelled on the US Scholastic Assessment Test (SAT), said two government officials familiar with the plan.

AICTE wants to attract students from some half-a-dozen Asian countries seeking admission to management programmes. The regulator is to roll out the entrance exam in Asian countries, followed by African countries and then take it global.

“The plan is to execute it in next six months or so, ideally before the next academic session begins in June-July," said one of the two officials, requesting anonymity.

Policymakers and experts say the move will initiate the process of internationalizing Indian higher education and benefit the country’s educational institutions.

Although more than 100,000 Indian students go abroad for studies every year, the reverse flow to India is much less. According to data from the Human Resource Development (HRD) ministry, 93,693 foreign students were studying in India in 2013. But the official cited above said the number of new students arriving in India every year may not make up more than 15% of this number.

“The opportunity to get students from Asian and African countries is huge but as a country, we have failed to tap that so far. Expanding the education boundary is not a bad thought," said the second official, who also requested not to be named.

The second official said the AICTE is in touch with the ministry of external affairs and embassies of the target countries to take the plan forward.

Avinash S. Pant, vice-chairman of the AICTE, confirmed the development.

“Yes, we are planning to go global. We have discussed it with the ministry of external affairs and they have advised us to write to the concerned embassies of the target countries," Pant said. “We recently wrote to the country embassies and have received so far two positive responses, and (are) waiting for others to share their views."

The plan follows a recent controversy over the opening of a research academy in Mauritius by the Indian Institute of Technology (IIT), Delhi, allegedly in breach of rules. AICTE “is taking all steps to ensure that no problem arises in future," the second official said.

S.S. Mantha, who stepped down as AICTE chairman on 2 January, said he had started the process during his tenure.

“Other than internationalization, it will also help Indian B-Schools get enough students, diversify the teaching-learning atmosphere—a key for improving international ranking—and also bring dollars to the country," Mantha said.

Later, the HRD ministry and the AICTE can take tests for engineering and other top management courses abroad, Mantha said. “It will put in place a system and a proper screening process to get more foreign students," he argued.

Birmingham City University vice-chancellor Cliff Allan, who was recently in Delhi to promote the UK institution, said it would be a good attempt provided the institutions are sure about what they want to offer students.

Indian business schools may not be among the world’s best, but comparing Ivy League colleges and similar institutions to the country’s tier-II institutions (non-Indian Institute of Management (IIM), non-IIT schools) is unfair, the second official said. 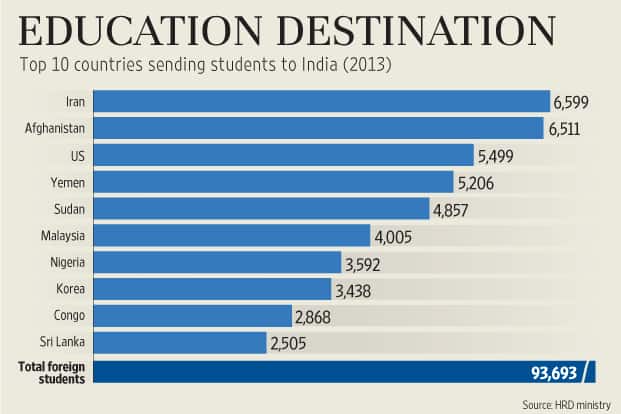 In any case, AICTE is not targeting the US or leading European countries, but its own Asian neighbourhood, to be gradually expanded to other continents, the official said. “India is one of the growing economies and most countries want to know about India, and here, education gives a good opportunity for future global managers," the official said.

R. Panicker, director general of Indo Global Colleges, a chain of private professional colleges in Punjab, said getting students for management schools has become tough in the last few years.

“Any attempt to put in place a process to bring foreign students will benefit Indian colleges a lot. More than any stream, management education needs to go global as it will benefit the colleges, students and the government. Colleges will get students, foreign students can avail education cheaper than in many other countries and government will see dollar flows to India," Panicker said.

Panicker said Indian B-Schools were suffering because of poor job prospects sentiments over the past few years in the face of rising student expectations and in some cases, poor learning environment.

Even the Common Admission Test (CAT) conducted by the elite IIMs has seen interest fading. In 2014, only 189,759 students applied for CAT, the lowest number since 2007 when around 250,000 did, forcing organizers to reopen the registration process midway, but the applicant numbers did not cross 200,000.