Teenagers from developing world are at greatest risk of tobacco addiction

India accounts for 10% of the world's smokers, behind only China, which accounts for a fourth of smokers worldwide

Think tobacco, and the names of big Western giants like Phillip Morris and British American Tobacco come to mind. Yet, while the industry is dominated by these legacy players from the rich world, their market is shifting from the West to the East. As the chart below shows, six out of the 10 countries that account for two thirds of the world’s smokers are developing countries. India accounts for 10% of the world’s smokers, behind only China, which accounts for a fourth of smokers worldwide. According to a recent study by Bo Xi of the School of Public Health, Shandong University, and his co-authors published in the Lancet last month, more than 80% of smokers worldwide live in low and middle income countries (LMICs), while about 90% of smokers begin consuming tobacco before the age of 18.

The data suggests that young people in the developing world are at greatest risk of tobacco addiction and suffering from the related health risks. As wealthy countries crack down on tobacco consumption by raising taxes and imposing stringent rules against tobacco advertising, the tobacco market is shifting to newer markets in developing nations. Of the 27 countries where smoking prevalence increased between 2000 and 2015, 25 countries were in Asia or Africa. Among the countries with the highest population of smokers, the smoking prevalence rate has been declining, as the chart below shows. Still, in absolute numbers, the top 10 countries continue to account for an overwhelming majority of the world’s smokers. 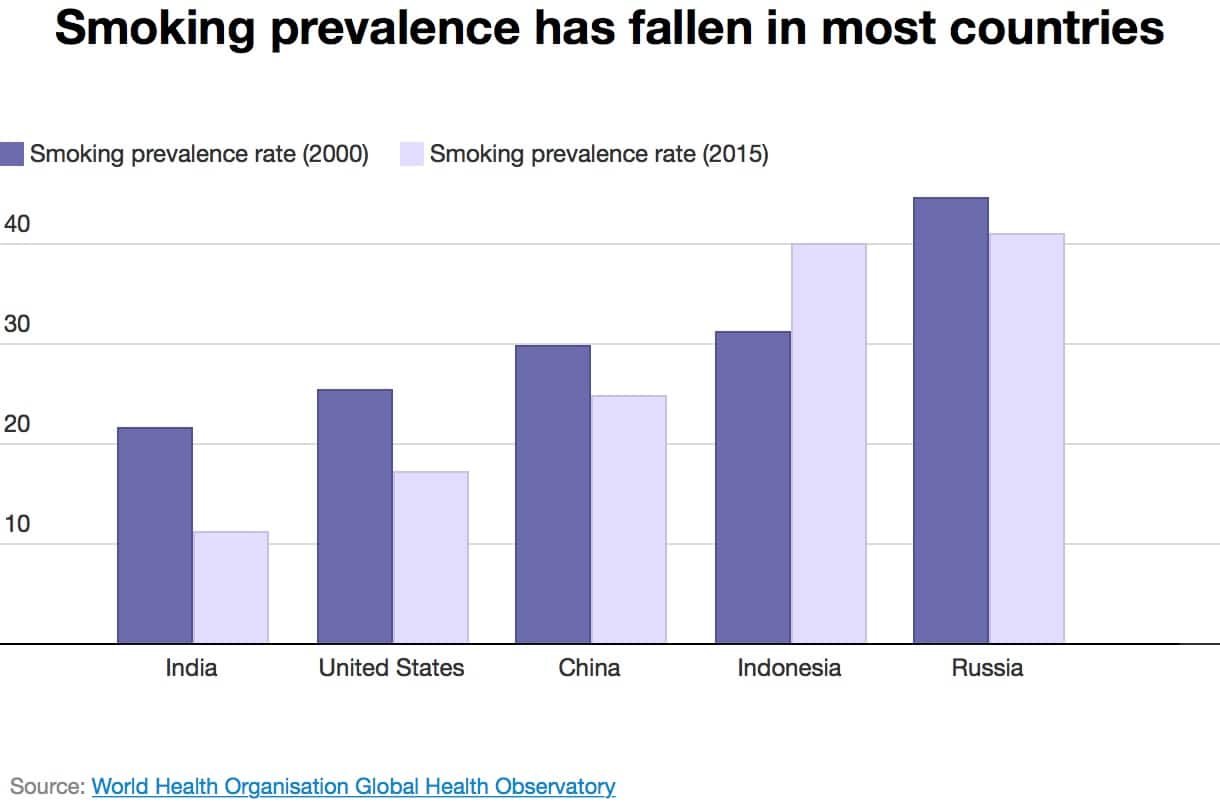 Xi and co-authors examined various factors that play a role in the tendency of adolescents to smoke. Based on data collected between 1 January, 2006, and 31 December, 2013, it found that on average, 13.6% of adolescents in this age group consumed tobacco (18.0% for boys and 8.9% girls), while 55.9% were exposed to second-hand smoke (57.6% for boys and 54.1% for girls). Second-hand smoking or passive smoking refers to the smoke inhaled when someone in the vicinity is consuming a tobacco product such as a cigarette.

Tobacco consumption varied widely across countries, from a low of 2.8% in Tajikistan to a high of 44.7% in Samoa, the study found. Compared to many other developing countries, prevalence of tobacco usage in India amongst adolescents was relatively low. While 4.8% of boys consumed tobacco products, 2.6% of girls in the given age group used tobacco. For children between the ages of 12 to 13 years, the prevalence rate was 2.8%, rising to 4.4% for children aged 14 to 15 years. In contrast, the prevalence rate was almost double for other Asian countries such as China and Pakistan. However, the study’s results also throw up a disturbing statistic: as the chart below shows, about half of adolescents who consume tobacco started doing so at or before the age of 11. According to Seema Gupta, regional director of the Voluntary Health Association of India (VHAI), which runs the Resource Centre for Tobacco Free India, it is children from poorly educated families in rural India who make fall for tobacco products quite easily.

“While gutkha is banned in some states, there are many other forms of chewing tobacco that are sold alongside biscuits and candies. These are accessible to children as young as four to five years old. For instance, a shopkeeper who is short of change will hand over a packet of chewing tobacco instead. Moreover, while smoking is seen as taboo for children, chewing tobacco doesn’t carry the same stigma with it," she said. Children in urban India, on the other hand, are more likely to smoke cigarettes. “In urban areas, children are more likely to smoke as tobacco companies heavily promote their brands, offering cigarettes for free in bars, music festivals and other such events that attract a young audience," she says, pointing out that lax enforcement of laws that prohibit sale of these products to children is a major reason behind tobacco products being easily accessible to children. 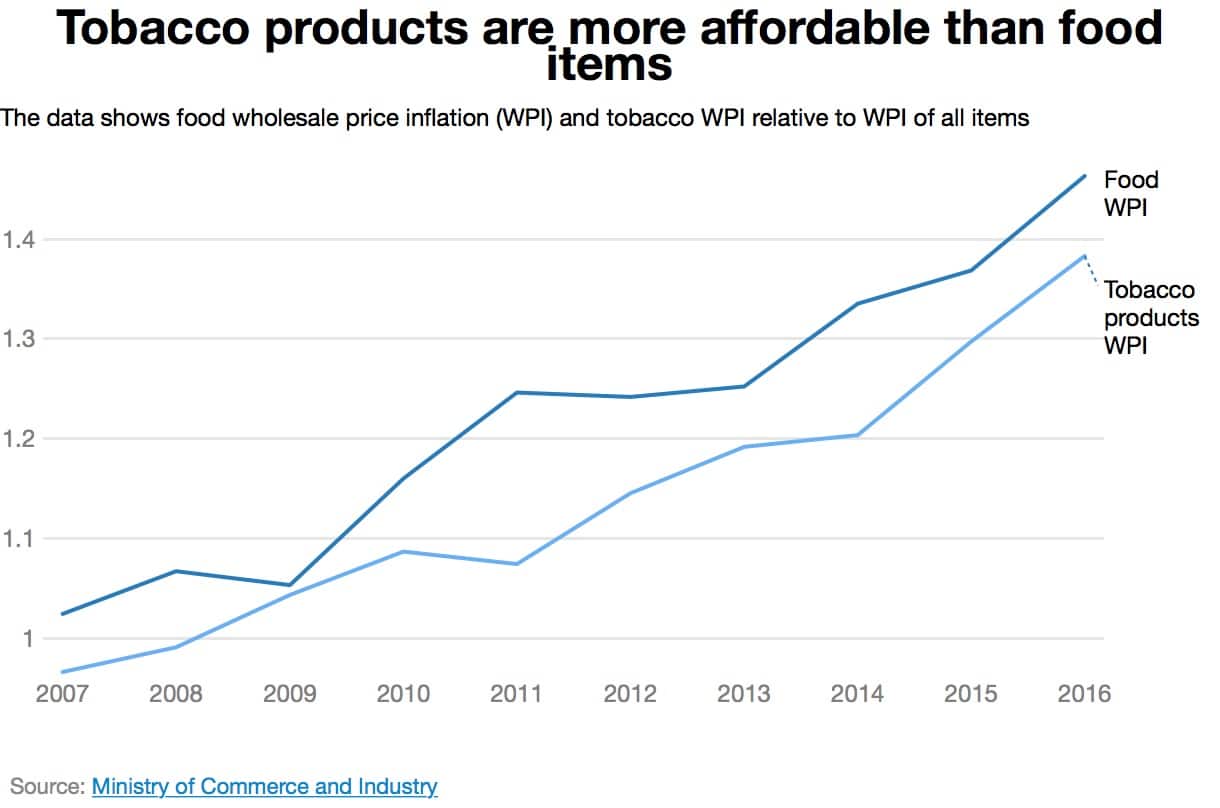 The PHFI study argued for the government to increase taxes on tobacco products in order to make them less affordable. Tobacco products includes bidis, cigarettes, tobacco and zarda, and taxes vary for all these different categories. Tobacco-control efforts are typically underfunded in developing countries. The WHO’s 2008 report on the state of global tobacco control found that per capita tobacco tax revenue amounted to $7 in low-income countries and $28 in middle-income countries. In contrast, high-income countries raised $205 per capita in tobacco taxes.

Xi and co-authors also point to other environmental factors that determine susceptibility. Smoking by parents and exposure to second hand smoke were the two most important factors, while a country’s purchasing power parity did not play any role in determining vulnerability, the study found. In general, prevalence of second-hand smoke was higher for boys. For instance, about 40% of boys in India reported being exposed to second-hand smoke, while the figure for girls was 32%. Smoking by mothers had a stronger influence on adolescents than smoking by fathers. While the reasons for this are not clear, the researchers argued that this may be because fathers are less likely to be present at home and youngsters may also be more attached to their mothers.

In order to stay profitable, tobacco majors need to “recruit" adolescents in developing countries in order to replace older, dying smokers, the authors warn. Thomas and Hefler make a case for raising tobacco taxes, banning tobacco advertising and promotion, and introducing regulations to protect non-smokers from second-hand smoke to prevent teenagers from falling for tobacco products. Unless such steps are taken quickly, the disease and death burden from tobacco consumption is likely to rise sharply in the developing world.