Why Indian Railways has failed to increase non-fare revenue

The NDA govt's ambitious NFR policy is a non-starter due to lack of direction on part of the national carrier.

Indian Railways’ ambition to raise its non-fare revenue (NFR) from less than 8% at present to 20% of its total earnings, and match global standards, seems unattainable. It’s not that the national carrier has a dearth of talent and resources, but it lacks direction. Therefore, the NDA government’s ambitious non-fare revenue policy for Indian Railways is virtually a non-starter.

Non-fare revenue is the income from various sources, excluding passenger and freight receipts. In railways’ terminology, non-fare revenue, or sundry and other earnings, comprise several segments such as dividends from its public sector undertakings, land lease, parking, sale of scrap, advertisements and publicity, among others.

But the NFR policy primarily deals with advertising on trains, railway bridges and other assets, setting up of ATMs at stations, offering digital content on trains and platforms and displaying infotainment systems, besides other innovative ideas that can help the railways increase its earnings. 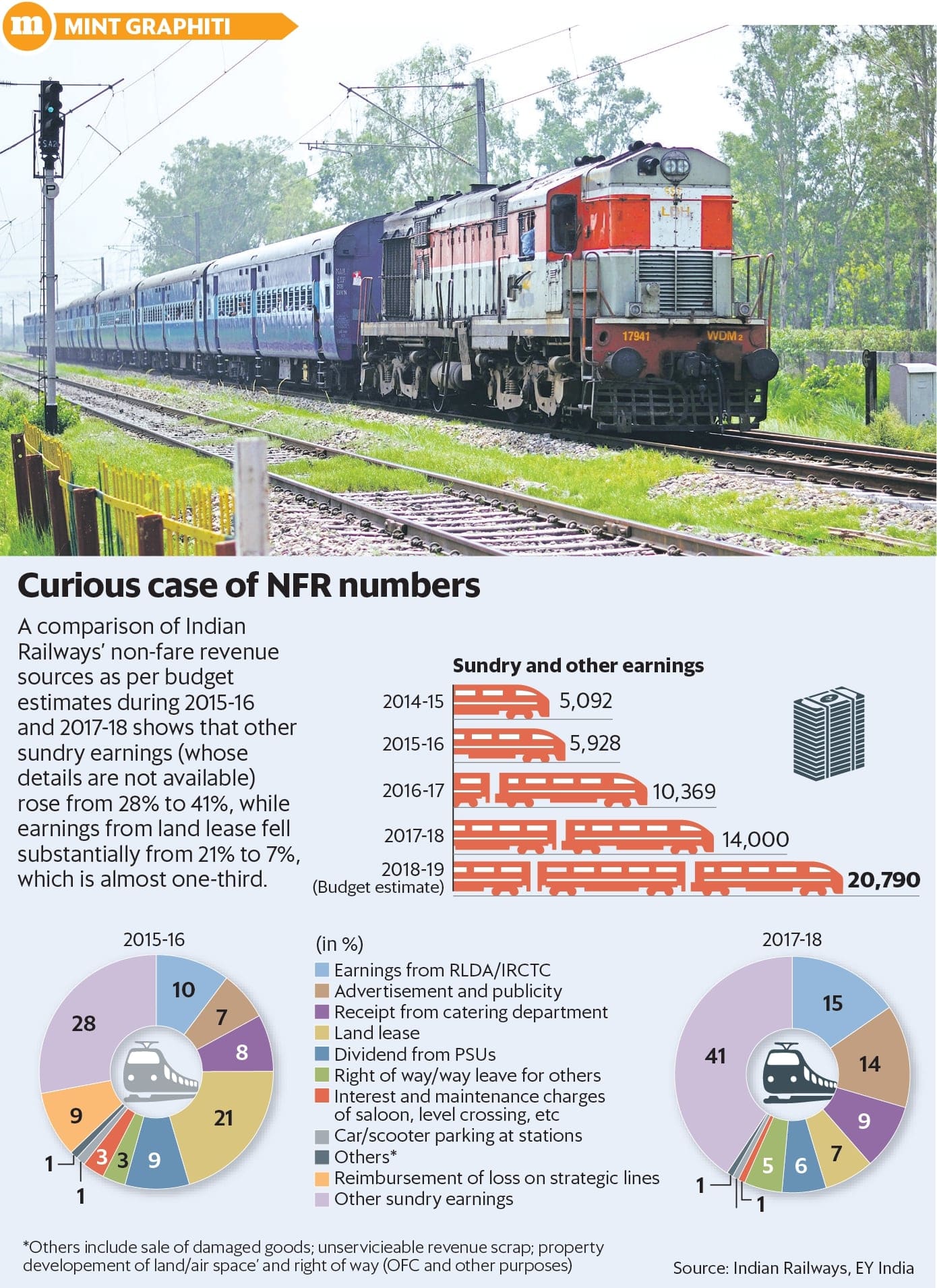 Indian Railways expects to earn around ₹ 15,000 crore in the next 10 years using the non-fare revenue model.

The first attempt to cash in on non-fare revenue sources was made in 2010-11. On 24 February 2010, the then railway minister Mamata Banerjee, in her budget speech, had said that Indian Railways will harness untapped revenue potential from branding/advertising of railway properties to significantly increase earnings. The revenue was estimated to go up from ₹ 150 crore to ₹ 1,000 crore.

However, nine years later, nothing much has changed. The target from advertising was raised from ₹ 1,000 crore to ₹ 1,200 crore for 2018-19, but it made just ₹ 32.65 crore in April 2018, according to the response by minister of state for railways Rajesh Gohain to a Rajya Sabha query. The earnings were primarily from commercial publicity at stations, coaches, wagons, loco, railway land, foot overbridge, road over bridge, road under bridge, etc.

The poor performance of the railways can be attributed to several reasons, including policy flip flop, failure to have dedicated teams for a fixed tenure and an attempt to micro-manage, rather than macro-managing initiatives.

A senior railway official, requesting anonymity, said the policy was released with much fan-fare and a target to earn ₹ 15,000 crore over the next 10 years was not too ambitious. “But they were not ready to take bold decisions. The team for NFR directorate was small. In fact, there was no consensus on whether it would be better to bid NFR projects in big bundles to attract big players who had more purchasing power." He added that possible investigations by the vigilance department and legal tussles were cited as major constraints.

When Suresh Prabhu assumed charge as the railway minister in 2014, a special non-fare revenue directorate was formed to draw up the road map. It started a few pilots, but before the team could learn from the outcomes and re-work its strategies, the Railway Board, in May 2018, switched the policy from centralized governance to decentralizing it for the NFR segment.

It decided to decentralize the work of earning non-fare revenue by giving all powers to the general managers of the 16 zones in which Indian Railways is divided. It was rechristened as “New Innovative Non-Fare Revenue Ideas Scheme". The railways also decided to reduce the contract from 5-10 years, to 3-5 years.

An executive from Zee Entertainment, who didn’t wish to be identified, said: “No one would like to take a chance when there is so much policy flip flop. Also, how would you divide NFR projects like content on demand? For example: If a company wants to provide content on demand on Rajdhani trains, they won’t go to all 16 zones and talk to the GMs. You will need to have a single window system."

He added that for content on demand, the railways had decided that zonal offices should adopt a hybrid revenue sharing model, wherein the licensee or service provider shall quote a fixed minimum guarantee, and share a percentage of the revenue over the benchmarked FMG. “What if all zones have different hybrid revenue models? No big player would like to fall in such a trap," he added.

It’s time for Indian Railways to do away the ambiguity on NFR models and, instead, let a central team lead the initiatives with examples.