The unequal gains of globalization

For many years, the global South has been the key battleground for anti-globalization activists who have campaigned to stall the forces of globalization in developing economies. Despite spirited activism, their efforts have not yielded big results in these countries. A majority of people in China and India support their growing integration into the world economy, according to the latest Global Attitudes Survey conducted by the Pew Research Centre.

What explains the growing backlash against globalization in advanced economies, and the absence of such a backlash in major emerging markets? A recently published research paper from Japan-based Research Institute on Economy, Trade and Industry (RIETI) seems to suggest that the answer may lie in the unequal gains from globalization. The RIETI study shows that the emergence of global value chains has benefited firms and workers in emerging economies such as China and India, while those in advanced economies have lost out.

The study uses the concept of global value chain (GVC) incomes to gauge the extent of competitiveness of an economy, and the gains it makes from trade. GVC income is defined as the value-added that industries contribute to the production of final manufacturing goods. It differs from value-added share of exports as it includes the value-added in producing manufactures which are sold domestically. Given that developed economies are facing declining domestic demand, and emerging markets are facing rising domestic demand, ignoring such differences may skew measures of competitiveness. To take an example, assume that a company producing entry-level smartphones sets up two factories in the US and India in exactly the same conditions and these produce an equal number of phones. Given the fact that domestic demand for such phones would be much greater in India than in the US, the Indian factory might end up selling bulk of its produce domestically and hence export less than its US counterpart. Just looking at the export data or the value-added share of exports might lead to an incorrect inference that the US factory is more competitive than the Indian factory in the global economy.

Using this measure to compute the value-added in manufacturing by major economies of the globe based on data from the World Input-Output Database, the RIETI researchers show that between 1995 and 2011, India almost doubled its share in real GVC income arising from manufacturing. 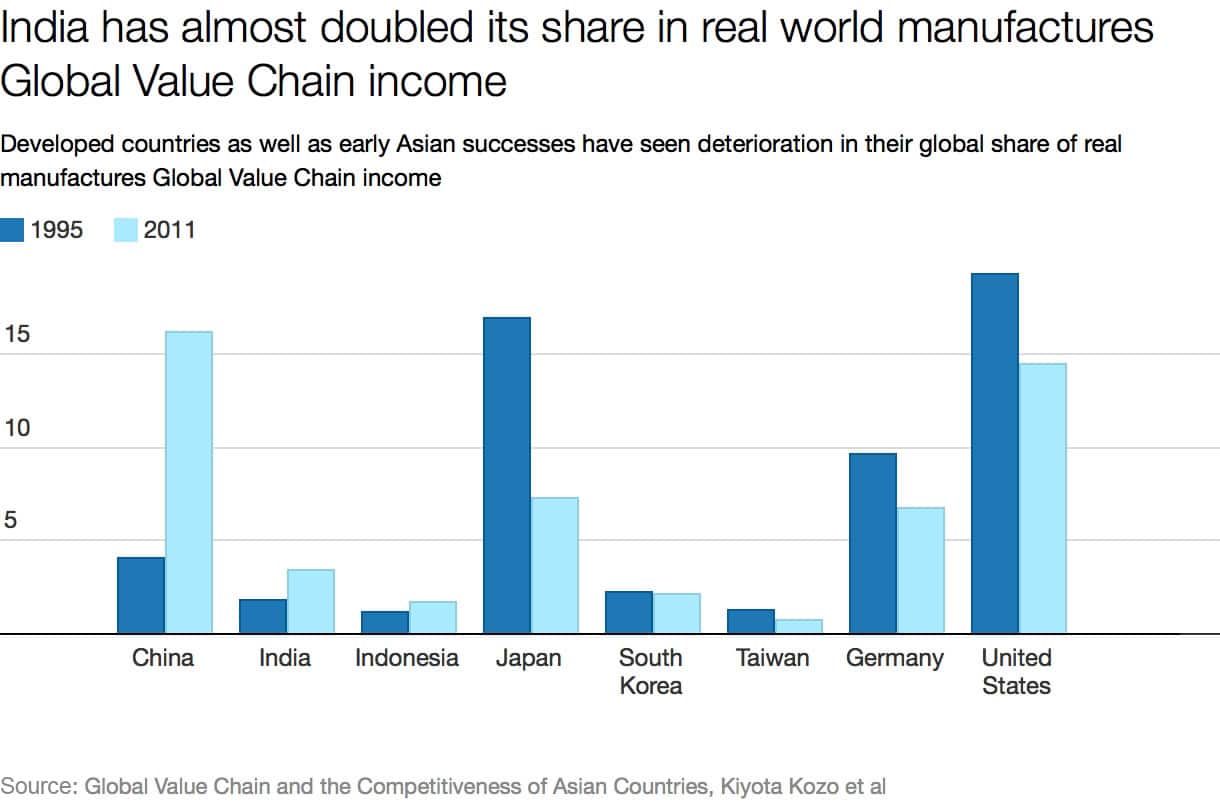 To be sure, India’s gains are far lower than those of China’s but compared to the fate of Asian tigers such as South Korea and Taiwan, India’s gains appear impressive. A large part of these gains has been driven by foreign demand for goods produced in India, as the chart below illustrates. 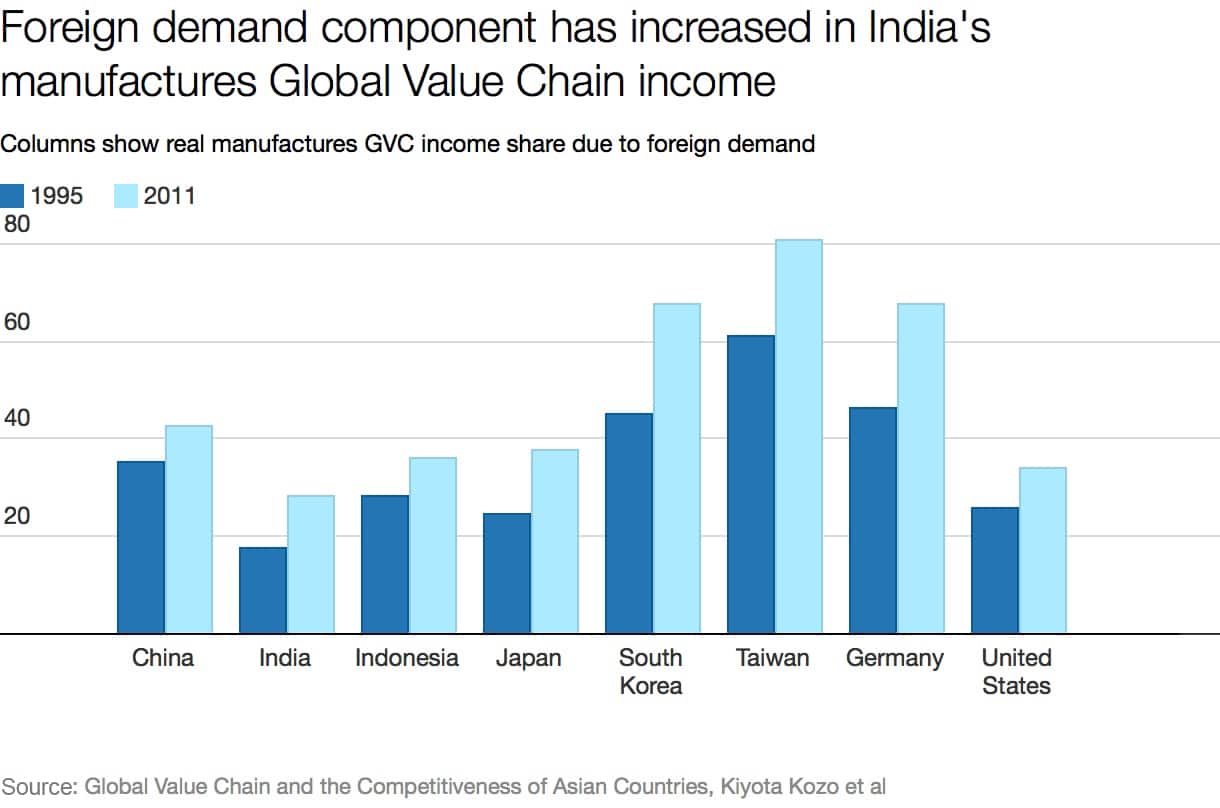 India’s integration into the global economy has not only benefited Indian industry, but also raised job opportunities for workers involved in producing for global value chains, the RIETI study shows. While high-skilled workers have gained far more than low-skilled ones, the overall gain in employment is higher relative to several other major economies. 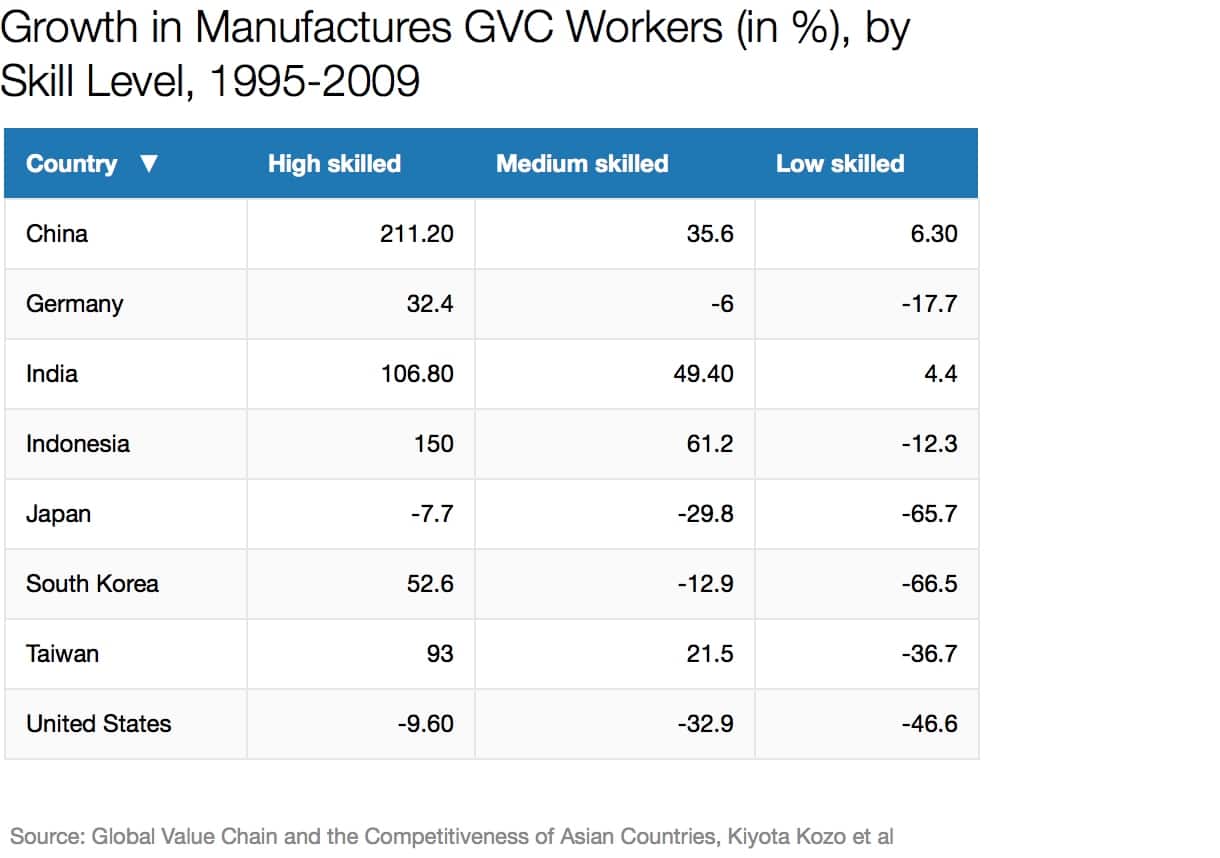 However, unlike China, which witnessed a big jump in wages along with rising employment, the wage growth for Indian industrial workers has been slower, the study shows. Moreover, given the huge size of the Indian labour force and the low skill levels of most of that labour force, the gains from globalization have eluded the majority.

A disaggregated export share analysis of labour intensive industries by Pankaj Vashisth of the Indian Council for Research on International Economic Relations shows that the share of high-skilled industries in India’s labour intensive exports has been rising over the past couple of decades. 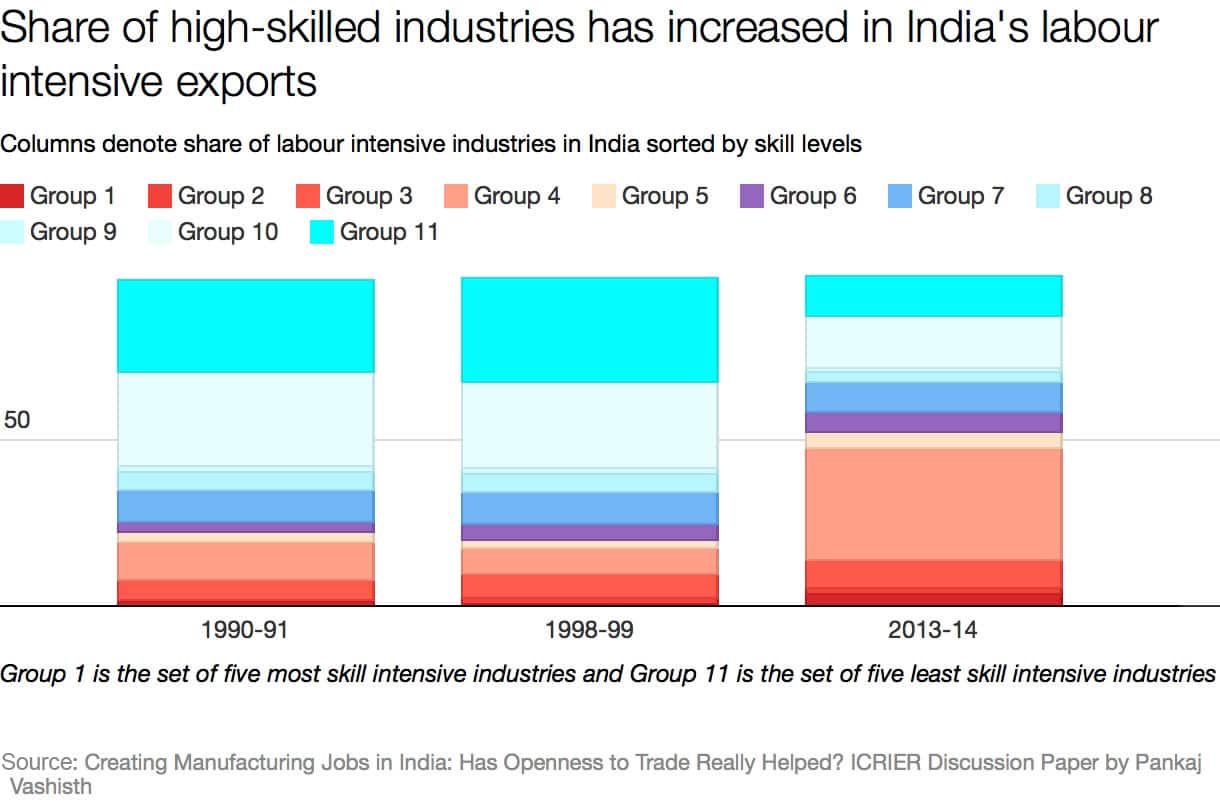 The upshot: while India has been a big beneficiary of globalization, the gains have not trickled down adequately to a large section of its workforce.