Sales of Ramayan rise in Kerala as harvest season takes off

Sales of Ramayan rise in Kerala as harvest season takes off

Kochi: Beginning Friday, thousands of people in Kerala will be hunched over the Ramayan every evening for a month, the text set nicely on stands carved specifically to hold holy books. For many of these people, typically retirees or past middle age, it’s a holy monsoon tradition. For some, it’s just habit.

And then there are the local publishers of the Ramayan, the epic holy to Hindus, said to be written by sage Valmiki in about fourth century BC. For them, Karkidakam, the last of the Malayalam months, is the harvest season. 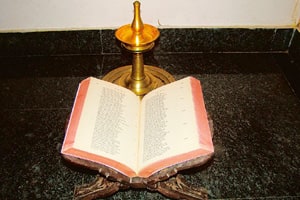 In demand: A copy of the Ramayan. As part of a tradition, thousands will read the epic in Kerala every evening for a month, starting Friday. Ajayan / Mint

No one really knows how the tradition started. C. Radhakrishnan, writer and one-time publisher of a Ramayan edition, offers an explanation that fits just right in an agrarian society as Kerala.

Karkidakam arrives after the harvest at the peak of the monsoons, a lean season for farmers and their families as they wait to start cultivation in August-September.

The rains also bring with it illnesses that spread fast, forcing them to stay indoors for some rest and rejuvenation. The setting was right for some religious activity and it became a custom to read the Ramayan during the month, says Radhakrishnan.

The former publisher of the epic says he came out with his edition a decade ago as “there were several editions and there was a need for clarity on uniformity." He published and sold 1,000 copies of the holy text in 1998, his first and last attempt at the business.

Mathrubhumi Printing and Publishing Co. Ltd, which has been selling the Ramayan for the past five years, has seen a steady rise in popularity, says assistant manager of its books division Shiju Philip. The firm sold 25,000 copies last year.

The growing demand for the Ramayan is quite noticeable, says K.C. Narayanan, literary critic and editor-in-charge of the books division of Malayala Manorama Co. Ltd, publisher of the Malayala Manorama daily paper and The Week magazine.

The company started publishing the epic three years ago. Narayanan declined to reveal the sales figures.

Janardhanan Nair, a government employee in the state government’s irrigation department, says it’s become a habit to read the Ramayan every evening for at least half an hour during Karkidakam.

Nair bought a new edition of the Ramayan on Wednesday from the Current Book Stall on Convent Road in Kochi to replace his earlier copy that he had got four years ago. The book stall is part of the DC Books chain. Radhamani Amma, a retired schoolteacher in her mid-60s, claims she’s not religious, but does not mind skipping television for an hour every evening during the month to read the epic.

It’s a sort of family tradition for Radhamani: Karkidakam evenings during her childhood meant family gatherings with one elder reading the holy text and others listening.