The global workplace gender gap is getting bigger and economic parity between the sexes could take 170 years, says report

New Delhi: The global workplace gender gap is getting wider and economic parity between the sexes could take as many as 170 years to close after a dramatic slowdown in progress.

The slowdown is partly because of chronic imbalances in salaries and labour force participation, despite the fact that, in 95 countries out of the 144 that are ranked, women attend university in equal or higher numbers than men. These are the key findings of The World Economic Forum’s (WEF) Global Gender Gap Report 2016, released on Wednesday.

The report is an annual benchmarking exercise that measures progress towards parity between men and women in four areas: educational attainment, health and survival, economic opportunity and political empowerment.

In the latest edition, the report finds that progress towards parity in the key economic pillar of gender has slowed dramatically with the gap—which stands at 59%—now larger than at any point since 2008.

Behind this decline are a number of factors. One is salary, with women around the world on average earning just over half of what men earn despite, on average, working longer hours, taking paid and unpaid work into account. 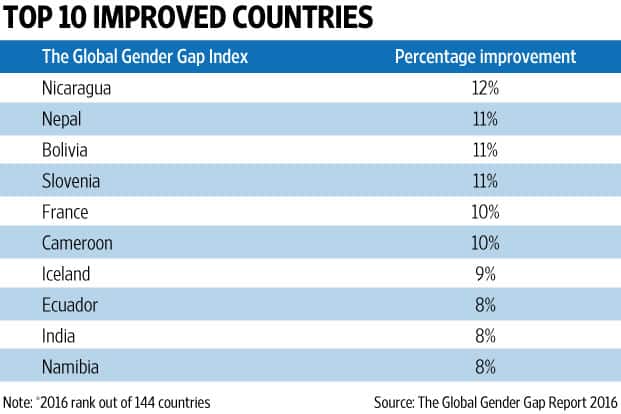 Another persistent challenge is stagnant labour force participation, with the global average for women at 54%, compared to 81% for men.

In 2015, projections based on the Global Gender Gap Report data suggested that the economic gap could be closed within 118 years, or by 2133.

The education gender gap has closed 1% over the past year to over 95%, making it one of the two areas where most progress has been made to date. Health and survival, the other pillar to have closed 96% of the gap, has deteriorated marginally. Two-thirds of the 144 countries measured in this year’s report can now claim to have fully closed their gender gap in sex ratio at birth, while more than one-third have fully closed the gap in terms of healthy life expectancy. The pillar where the gender gap looms largest, political empowerment, is also the one that has seen the greatest amount of progress since the WEF began measuring the gender gap in 2006. This is now over 23%; 1% greater than 2015 and nearly 10% higher than in 2006. However, improvements are starting from a low base: only two countries have reached parity in parliament and only four have reached parity on ministerial roles, according to the latest globally comparable data. The slow rate of progress towards gender parity, especially in the economic realm, poses a particular risk given the fact that many jobs that employ a majority of women are likely to be hit proportionately hardest by the coming age of technological disruption known as the Fourth Industrial Revolution. “Women and men must be equal partners in managing the challenges our world faces—and in reaping the opportunities. Both voices are critical in ensuring the Fourth Industrial Revolution delivers its promise for society," said Klaus Schwab, founder and executive chairman of the WEF. 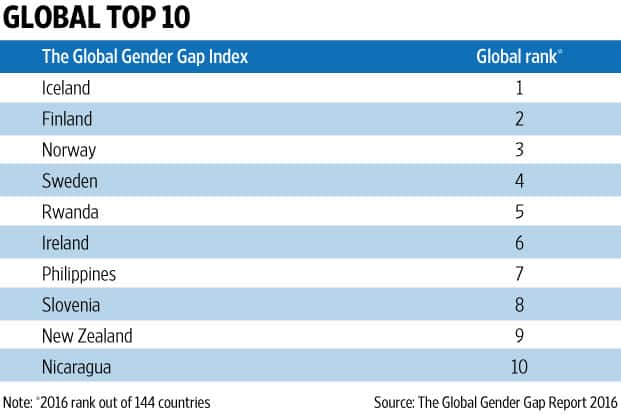 Which are the world’s most gender-equal countries?

Globally, the leading four nations continue to be Scandinavian: Iceland, Finland, Norway and Sweden, in that order. The next highest placed nation is Rwanda, which moves one place ahead of Ireland to the fifth position. Following Ireland, the Philippines remains unchanged at seventh, narrowly ahead of Slovenia (8) and New Zealand (9), which both move up one place. With Switzerland dropping out of the top 10, the 10th position is taken up by Nicaragua.

The US (45) loses 17 places since last year, primarily due to a more transparent measure for the estimated earned income. Other major economies in the top 20 include Germany (13), France (17) and the UK (20). Among the BRICS grouping, the highest-placed nation remains South Africa (15), which moves up two places since last year with improvements across all pillars. The Russian Federation (75) is next, followed by Brazil (79). India (87) gains 21 spots and overtakes China (99) with improvements across Economic Participation and Opportunity and Educational Attainment. 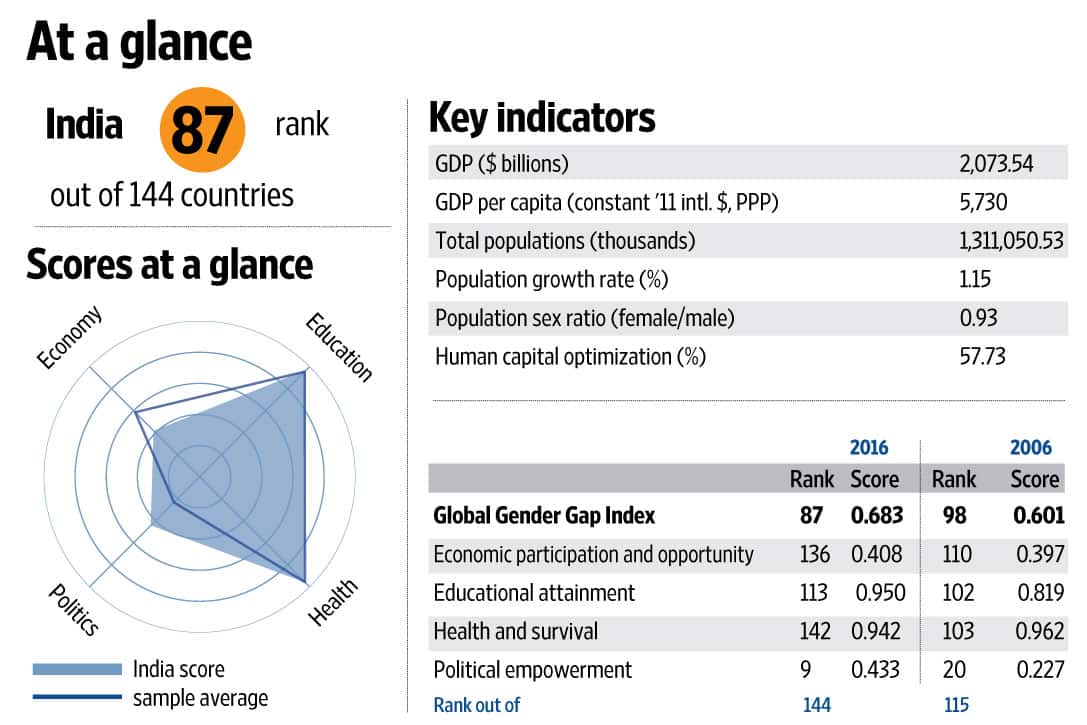 Where does India stand?

India is ranked 87 out of 144, improving from its 108 position in 2015. It has closed its gender gap by 2% in a year: its gap now stands at 68% across the four pillars of economy, education, health and political representation. The major improvement, however, has been in education, where it has managed to close its gap entirely in primary and secondary education. In the economic sphere, much work remains to be done. Overall, it ranks 136 in this pillar out of 144 countries, coming in at 135th for labour force participation and 137 for estimated earned income.

India is also among a group of countries that have made key investments in women’s education but have generally not removed barriers to women’s participation in the workforce and are thus not seeing returns on their investments in terms of development of one half of their nation’s human capital. This group also includes Iran, Islamic Republic, the United Arab Emirates and Chile. These countries have an educated but untapped talent pool and would have much to gain from women’s greater participation in the workforce.

The report shows that there remain huge differences in the opportunities for women in the best and worst performing countries around the world.