Hyderabad: The farm labour shortage Punjab farmers experienced during the recent harvest and planting seasons is now being repeated elsewhere in India, and the reason remains the same — the government’s flagship welfare programme, the National Rural Employment Guarantee Scheme, or NREGS. 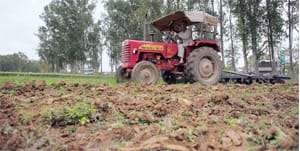 Short of hands: A farmer using a tractor to till his land in Punjab. Hit by a lack of farm workers, states such as Punjab and Andhra Pradesh are promoting mechanization to tackle the problem. Photograph: Ramesh Pathania / Mint

Now, farmer’s associations in Andhra Pradesh are complaining about a shortage of farm labour and blaming it on NREGS.

“While it is intended for landless labour in drought-prone and migratory areas, it is being implemented indiscriminately without understanding its implications," says P. Chengal Reddy, chairman of Federation of Andhra Pradesh Farmers’ Associations, adding that if nothing is done immediately, the shortage would lower farm production in the state by as much as 15-20% in the monsoon season.

S. Rama Rao, secretary of Andhra Pradesh Rythu Sangam, a farmers’ body affiliated to the Communist Party of India (Marxist), said the government should implement NREGS during the non-agriculture season so that it helps both farmers and farm workers.

However, government officials implementing the scheme say NREGS has improved the lot of the poor.

Dasari Srinivasulu, Andhra Pradesh’s agriculture commissioner, admits there is labour shortage in 55 mandals, or sub-districts, of 11 districts but says landlord farmers are also unwilling to pay higher wages. In Andhra Pradesh, labouring in the fields for a day fetches Rs30-50 for women and Rs40-60 for men.

Says A. Murali, director of the scheme in the state, “NREGS has improved the livelihoods of farm workers across the state by paying minimum wage of Rs80 per day." NREGS does not discriminate on gender. “Why should farm workers compromise for lower wages when they have the opportunity and guarantee of 100 days of higher wages every year under NREGS?"

The state government has taken up some 1.4 million projects worth Rs13,329 crore under the scheme that are mainly meant to augment land and water resources, such as strengthening minor irrigation sources and embanking farmland for better productivity. Some 24.4 million impoverished villagers have registered for NREGS in Andhra Pradesh. Of these, the state government has already provided employment to some 11.5 million and paid them Rs3,400 crore in wages, Murali says.

Murali adds that the state government will formulate a new employment guarantee scheme calendar in the next two months or so, which would enable labourers to get comfortable livelihood year round, and also ease labour shortages.

Meanwhile, a survey by the Kerala University’s economics department has said NREGS has led to shortage of labour and rise in wages of farm workers in that state. The survey, conducted during June and July last year, suggested the government suspend NREGS during peak agriculture seasons. The survey has also suggested that the Central and state governments follow favourable policies to promote farm mechanization by withdrawing taxes on farm machinery and other capital stock required for agricultural operations.

Mint has reported in a series of stories on how Punjab farmers found it hard to get farm labour as many regular migrants from Jharkhand, Uttar Pradesh, Chhattisgarh and Madhya Pradesh preferred to stay back in their villages and work under NREGS. This led to increased costs as wages shot up during the wheat harvest and procurement, and rice transplanting seasons.