Dubai, Ghaziabad: Caste is most often seen through the prism of conflict—the heated national debates about reservations, the political polarization on the census and the attacks on young couples that have been blessed by caste panchayats.

But far away from the spotlight, there is the more benign world of organizations and activists who continue to nurture informal networks based on caste, to help fledgeling businesses, build educational institutions and promote philanthropy.

Consider the case of Avneesh Dahiya.

Dahiya owes his three-year journey from Bhojpur, a small village about 187km from New Delhi, to the National Capital Region (NCR), to the commitment of one man to use personal success to help other members of his caste. Malik, also national president of All India Jat Arakshan Samiti (AIJAS), a caste-based outfit demanding recognition of Jats as Other Backward Castes (OBC) at the national level, met Dahiya in 2007.

“What do you do?" he asked Dahiya, who had already spent more than three decades in the village, landless and jobless. With Jats rallying to demand reservations for their community, AIJAS had just been formed, and Malik invited Dahiya to join.

In order to help a fellow Jat, Malik also helped Dahiya procure a licence to run the dairy outlet and waived the rent for the shop. The dairy helped Dahiya meet two fond aspirations: to earn a livelihood and send his children to college.

Caste continues to puzzle and infuriate many modernizers, but the institution has survived and changed in the six decades after independence even as it continues to whip up passions that can split most political parties down the middle.

But away from the heated arguments whether the government should ask citizens details about their caste, the institution itself has shown remarkable resilience and acts as a magnet for identity and philanthropy. 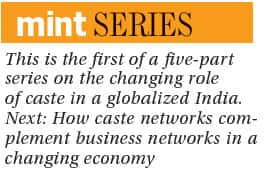 Malik’s focus, for example, is not just Masscon India Pvt. Ltd, the real estate firm of which he is the managing director. As a leader of AIJAS, Malik says he finds his true calling. “The business is important because it helps you make money, but AIJAS is what takes the money where it truly belongs—back to the community."

Malik is a caste leader, of sorts. His caste outfit and business firm collectively serve the community in two ways: while AIJAS helps needy people from his community who approach him, Masscon becomes the employment generator.

Since the company was set up in 2000, it has recruited around 40 people from the Jat community as office staff alone.

Sociologists view the rise of caste-based organizations as an after-effect of post-Mandal politics in India, the period after 1989 when the Indian government introduced 27% reservation for OBCs in government jobs. “Caste remained unattended before that. Prior to Mandal, there was no reason for individual backward castes to be assertive at the national level. Post-Mandal, caste-based organizations are using caste as an effective instrument of community building and its social and financial upliftment," Anand Kumar, professor of sociology at the Jawaharlal Nehru University in New Delhi, says.

While there are no hard numbers to measure the spread and appeal of such caste organizations, a search on the Internet throws hundreds of names of such outfits with regularly updated websites. While most of them claim extensive membership, many admit that finding issues relevant to the youth of their communities is a big challenge these days.

The Chitragupta Kalyan Sangathan, an organization for Kayasthas, who are traditionally known as the caste of the account keepers, in Delhi’s Shahdara, has a helpline for jobs and marriages. The small office tucked away in an old dilapidated building is remarkable because it has no staff, except a peon and a typist to answer the telephone, no photocopier and no conference room. “We do most of the work in the field," its convenor Santok Saxena says. “We have a large community pool of lawyers, financial planners and bankers. Whenever someone needs us, we offer guidance and relevant contacts."

The Kayastha Mahasabha in Mumbai helps entrepreneurs start their own ventures. “We help them in securing bank loans from our contacts, because it is very difficult for a new entrepreneur to get loans. Sometimes we act as guarantors as well," says Pramod Srivastava, convenor of the organization.

Over the years though, organizations admit much of their appeal has waned.

“What we do is very traditional, such as organize mass marriages and religious festivals, which don’t attract the youth of our community. While forward castes are capable of financial means to dispense with, there is lack of unity," says Praveen Sharma, secretary of the Brahman Samaj Sanstha in Delhi.

Sociologist Anand Kumar says unlike the backward caste organizations, associations of forward castes today are on the defensive owing to the rise of OBCs. “They are suffering downward mobility. In the 1950s, they were 70% in elected positions. Now, it is down to 30%. In the changed situation of coalition politics, they are adjusting and have no individual identity," he points out.

At the same time, analysts feel that the caste organizations’ co-option into politics and vice-versa has led to trivialization of the groups’ roles such as their activities remaining limited to distributing medals and organizing dinners to community members.

Some of the examples of this co-option, where caste groups made way for political voices, are the Bharatiya Lok Dal, which was led by Jat leader Chaudhary Charan Singh in Uttar Pradesh, and the Rashtriya Janata Dal led by Lalu Prasad in Bihar, which acted as growth engines of caste-based politics in India. Avneesh Dahiya at his outlet in Ghaziabad.Pradeep Gaur/Mint

Ajay Navariya, Dalit writer and assistant professor at Jamia Millia Islamia University in New Delhi says caste organizations got politicized after independence and expected the government to provide for everything. “They have lost sight of more pertinent issues at hand and have become victims of casteist politics," he adds.

About 40km away from Delhi on National Highway 58, Choudhary Chhotu Ram Girls’ Inter College (CCRGC) in Duhai is perhaps a near-perfect example of what may have gone wrong with social work centred around caste and community welfare in the last six decades.

Since 1946 when Jat leader Chaudhary Mukhtiar Singh set up the school for girls’ education, the village of Duhai hasn’t seen the establishment of any other institution of higher education by a member of the community. Around the time the college was founded, the western Uttar Pradesh belt, particularly Muzaffarnagar, saw a spurt in schools and colleges set up by Jat businessmen and leaders.

Since then, the pace of educational work slowed only to stop completely in the 1980s, say educationists.

In his rhetoric on the diminishing role of caste-based organizations in social welfare, Sunil Chowdhary, manager of CCRGC, is quick to lash out at caste-based politics, especially by parties such as the Bahujan Samaj Party and the Rashtriya Janata Dal in north India. “Earlier, caste-based organizations were set up to work for social uplift. After the 1980s, almost each one of them rallied with a political outfit to assert themselves politically," Chowdhary says. “There was a time when even Jat leaders like Choudhary Charan Singh laid foundation of a degree college by Gujjars. Is it possible today?"

Listening intently to the entire debate, Balbir Singh, manager of BR Ambedkar Primary School in Duhai, where he has been providing free education to children of the scheduled castes, differs. “They (caste groups) at least organize our struggle through a forum and raise a collective voice for our causes," he argues.

Inside Chowdhary’s office, dark and humid without electricity, Singh—with his greying hair and tense forehead—is suddenly agitated by the debate. Slowly, the gathering grows to half a dozen people in the room. Someone quotes example of caste groups in Gujarat, which set up orphanages, rest houses, old-age homes and colleges for the community.

Kantaben Kamdar Charitable Trust and Jhaverchand Manekchand Trust of the Saurashtra Khadayta caste, or the trader caste, for example, contributes around Rs30,000 every month to support 42 families in the villages of Junagadh in Gujarat.

For what little Singh has known, this doesn’t happen in his world. “There are hardly any such groups which work for lower rungs of their communities," he says.

His concerns are not entirely unfounded. The Ambedkar Samaj Sudhar Samiti (or Ambedkar Social Reform Committee), founded by him, often ends up facing resistance from upper caste groups for the work they do: opposing child marriages, untouchability and manual scavenging.

Eleven years ago, he, then unmarried, even picked up a girl child from the streets and brought her home after police refused to find a shelter despite his repeated reports. “Well, what would you have done?" he asks.