Can a buoyant BJP defy history in Haryana?

Before the 2014 Lok Sabha election, the BJP's performance in Haryana has not been inspiring

The Bharatiya Janata Party’s (BJP) decision to dump the Haryana Janhit Congress-BL (HJC-BL) and contest this month’s assembly election on its own was prompted by its spectacular performance in the April-May Lok Sabha election and faith in Narendra Modi’s charisma. The BJP won seven of the eight seats it contested in the 16th general election and polled 34.7% of the votes. Broken down to the assembly level, the BJP led in 51 of 72 assembly segments it contested; two Lok Sabha seats accounting for 18 assembly segments were contested by the HJC-BL. But considering the fragmented character of Haryana politics, the past dismal performance of the BJP in assembly elections, and the drubbing it received in the by-elections after the Lok Sabha polls, it is indeed a brave move by the BJP to strike out on its own.

Before the 2014 Lok Sabha election, the BJP’s performance in Haryana has not been inspiring. It only did well when it struck alliances with state parties. Electoral history also suggests that the BJP has always performed better in the elections to the Lok Sabha as opposed to the assembly.

The party has consistently polled more than 15% votes in all Lok Sabha elections since 1996, which went up to 29% in 1999 when it won five seats and polled 29% votes in alliance with the Indian National Lok Dal (INLD). The BJP contested the 1996 and 1998 Lok Sabha polls in alliance with the Haryana Vikas Party (HVP) and polled 19.7% and 18.9% of votes, respectively. Even when it contested on its own in the 2004 and 2009 general election, it maintained a respectable 17.2% vote share.

However, in the context of assembly elections, the BJP, neither in alliance nor on its own, has ever managed more than 10% of the votes. Its two best performances, winning 16 seats in 1987 and 11 in 1991, came in alliance with the INLD and the HVP. But on both occasions, given that it had contested fewer seats, its vote share barely touched 10%. When it was on its own, in the 2005 and 2009 assembly elections, its vote share was 10% and 9%, respectively; it won two and four seats in each effort.

Clearly, history is stacked against the BJP. 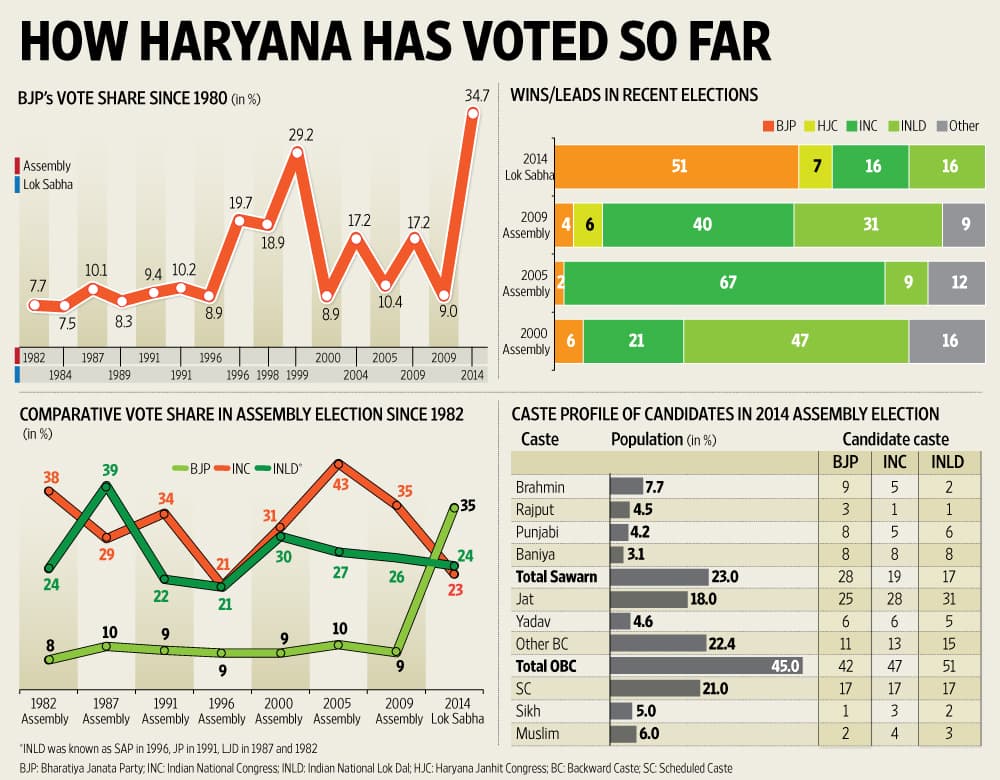 No single caste dominates the demography in any state as the Jats do in Haryana, accounting for more than one-fifth (including Jat Sikhs) of the electorate. The social metrics of Haryana’s electoral politics has always been viewed in terms of Jats versus non-Jats. Chaudhary Devi Lal and his clan has dominated Jat politics for more than four decades, while the Congress occupied the non-Jat space by promoting leaders like Bhajan Lal even while it enjoyed its own pocket of Jat support.

The BJP has been claiming the non-Jat space in the state, but has struggled to make progress. In the 1999 general election, it could win only one Jat seat (Sonipat), while the other four—Ambala, Mahendragarh, Karnal and Faridabad—came from the non-Jat belt.

Sawarns (upper castes), who constitute about 23% votes (Brahmin 7.7%, Punjabi 4.5%, Rajput 4.2%, Bania 3.1%) have mostly backed the Congress. More than 20% Dalits dominated by Jatavs have been backing the Congress before the rise of the Bahujan Samaj Party (BSP) and continue to constitute the core of the Congress vote in most parts, primarily due to Jat-Jatav conflict.

The 27% non-Jat other backward classes (OBCs) dominated by the Yadav, Gurjar and Saini communities were a divided lot, but the pro-farmer image of socialist leaders like Devi Lal and Om Prakash Chautala have managed to wield their influence on them. These non-Jat OBCs were never given due recognition in state politics due to their scattered presence, yet they are the most important swing voters.

However, the 2014 Lok Sabha election turned the social metrics of state politics upside down. The BJP not only won all non-Jat dominated Lok Sabha seats but also made significant inroads in the Jat belt by winning the Sonipat and Kurukshetra Lok Sabha constituencies.

The BJP’s weakness in the Jat belt is still apparent because it lost Rohtak to the Congress and its National Democratic Alliance (NDA) partner HJC-BL conceded Sirsa and Hisar to the INLD.

In the 2009 assembly elections, the Congress swept this belt by winning 20 seats, followed by 12 seats by the INLD.

This indicates that the INLD was not the only choice for the Jats. The Congress could manage a better strike rate due to substantial Jat votes and additional support of Dalits and other communities.

However, the BJP surprised everyone by leading in 19 assembly segments along with its alliance partner HJC-BL in the 2014 Lok Sabha election, but the Congress still managed to lead in 13 seats while INLD got completely marginalized by winning just seven assembly segments.

Assembly level trends in the 2014 Lok Sabha elections are significant in more than one sense. First, the BJP managed to make inroads among Jats, primarily at the cost of INLD. Secondly, the Congress still has strong pockets of domination over the Jats, particularly in Rohtak and Jhajjar districts. It is also noteworthy that in 13 of the 16 assembly segments where the Congress led in the 2014 Lok Sabha election were in the Jat belt, suggesting a major shift in the non-Jat voter base towards the BJP in the remaining 51 non-Jat assembly segments of Haryana.

The BJP’s leadership probably understands that the recently acquired support of Jats and other OBC communities may not be easy to retain in the upcoming assembly election due to the dominance of local factors and the influence of the state leadership. Therefore, the BJP has continued its efforts to woo them by inducting two OBC ministers in the Union cabinet, Rao Indrajit (Yadav) and Krishnapal (Gurjar).

The social profile of BJP candidates suggests that it has gone the extra mile to accommodate OBC candidates by giving 25 tickets to Jats and 17 to other OBCs. The induction of Congress leader and inheritor of Jat stalwart Chhotu Ram’s legacy, Chaudhary Birender Singh, into the party is another effort to consolidate the Jat support base by the BJP.

The BJP will certainly be at a disadvantage for not possessing a state leader of the stature of Om Prakash Chautala of INLD or Bhupinder Singh Hooda of the Congress. But this handicap of BJP may be more than offset by the double anti-incumbency against Hooda and the conviction of Chautala in the teachers’ scam.

Modi’s charisma, too, may also help the BJP tilt the odds. If indeed this does happen, it will completely redefine the BJP’s future stance on state leadership—because this would be achieved purely on the Modi brand.

In the final analysis, it is clear that the political momentum favours the BJP. The big question then is: will the BJP rewrite electoral history of Haryana.

The author is a psephologist and director of Research and Development Initiative.