New Delhi: India needs to scale up its interventions to tackle the HIV/AIDS burden in order to shore up efforts that saw the number of Indians dying from the disease fall 58% from 2005 to 2016, UNAIDS said.

The figures were published on Thursday in a new UNAIDS report that also said that for the first time that more than half the people living with HIV (53%) around the world now have access to treatment and AIDS-related deaths have almost halved since 2005.

India remains the country with the third largest population of people with HIV after South Africa and Nigeria.

The report titled Ending AIDS: progress towards the 90–90–90, however, revealed that in India, only 49% of patients were on Antiretroviral therapy (ART) in 2016. The coverage of pregnant women living with HIV accessing antiretroviral medicines is 41% and for children it is a mere 33%.

“We have recently launched ‘Test and Treat Policy for HIV’ policy. As soon as a person is tested and found to be positive, s/he will be provided with ART. We have intensified our efforts to find all those who are infected with HIV," said Dr. Arun K. Panda, additional secretary, National Aids Control Organization (Naco).

The Union health ministry has recently written to all states and WEUnion territories to direct private clinics and hospitals in their respective areas to compile and submit a list of HIV/AIDS cases they are treating. The move has been taken in a bid to get a definite data on HIV/AIDS. “Because there is a taboo associated with HIV/AIDS, and patients feel shy of coming to a government hospital, we miss a considerable data on HIV/AIDS. We want to get an accurate and authentic data on HIV/AIDS. The government will also duly validate the data from private clinics and hospitals keeping the patients’ details confidential," said Dr. Panda. 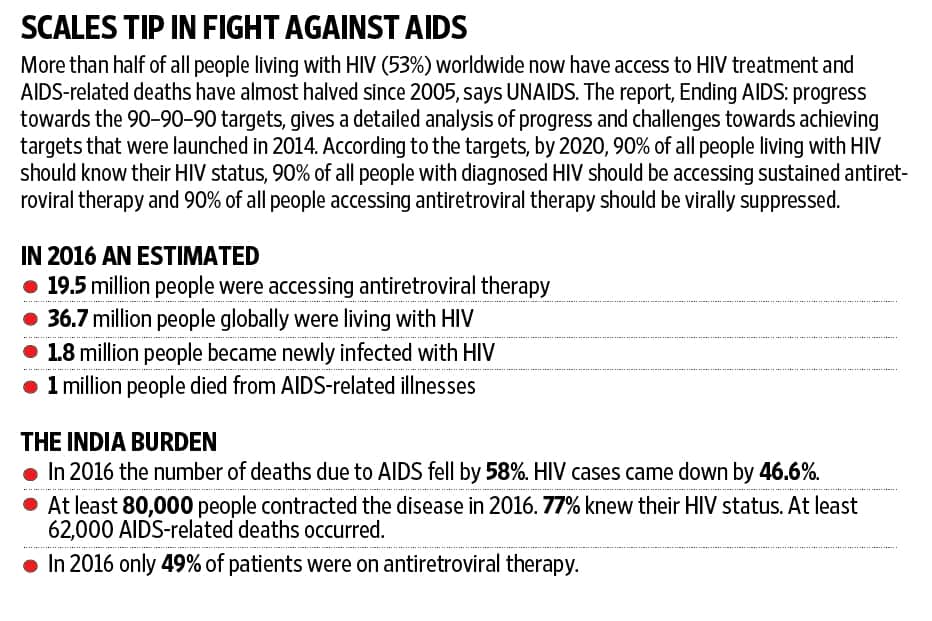 When it comes to the worldwide data, UNAIDS report said that in 2016, 19.5 million of the 36.7 million people living with HIV had access to treatment, and AIDS-related deaths have fallen from 1.9 million in 2005 to 1 million in 2016. Provided that scale-up continues, this progress puts the world on track to reaching the global target of 30 million people on treatment by 2020.

The region showing the most progress is eastern and southern Africa, which has been most affected by HIV and which accounts for more than half of all people living with HIV. Since 2010, AIDS-related deaths have declined by 42%. New HIV infections have declined by 29%, including a 56% drop in new HIV infections among children over the same period, a remarkable achievement resulting from HIV treatment and prevention efforts that is putting eastern and southern Africa on track towards ending its AIDS epidemic, the report highlighted.

“We met the 2015 target of 15 million people on treatment and we are on track to double that number to 30 million and meet the 2020 target," said Michel Sidibé, executive director of UNAIDS. “We will continue to scale up to reach everyone in need and honour our commitment of leaving no one behind," Sidibé said.