New Delhi: Safe child deliveries, the use of contraceptives, and post-natal care for mothers are still largely alien concepts in India’s poorest states, a government survey has found.

Uttar Pradesh (UP) emerged as the state having the worst health indicators in the country.

The Annual Health Survey (2010-11) to assess the impact of the government’s flagship health programme, the National Rural Health Mission (NRHM), found that nearly 60% of child deliveries in the nine states surveyed were done outside hospitals. 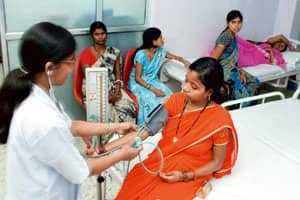 Corrective measures: A health centre in Bihar. The government plans to modify the NRHM plan to address the issues highlighted by the survey. Photo by Priyanka Parashar/Mint.

The survey was conducted between 2010 and 2011 for reference years 2007-2009—two years after NRHM was initiated. It identified 57 districts—including 34 in UP—as having the worst health indicators in the country.

The government will now modify the NRHM programme to address the issues highlighted by the survey, mission director Anuradha Gupta said. “We are hopeful since we now know exactly where our strategies need to be re-evaluated," Gupta said. “This will give a basis for evidence-based policies and we will tweak NRHM according to the survey findings. One must remember that in 2010, NRHM was still being rolled out and hence the outcomes will not be drastically different. We had expected such outcomes and are hopeful that the next survey will give a more comprehensive picture of NRHM’s policies."

A landmark health survey covering more than 20 million Indians has identified some of the worst-off districts in the country. Mint’s Vidya Krishnan discusses the impact the study could have on health policies.

The nine states covered in the survey—Assam, Chhattisgarh, UP, Madhya Pradesh, Bihar, Jharkhand, Orissa, Uttarakhand and Rajasthan—account for about 48% of India’s population, 59% births, 70% infant deaths, 75% under-five mortality and 62% maternal deaths.

A key finding was that in UP, Bihar, Jharkhand and Rajasthan, women on average bear more than three children, with the highest of 5.9 children per woman reported in UP’s Shrawasti district. The use of contraceptives, or the contraceptive prevalence rate, varied from 37.65% in Bihar to 64.5% in Rajasthan. Overall, 98 districts reported less than 50% usage of any method of contraception. “The unmet need for family planning is critical as it helps us to assess the future demand. Bihar and UP have emerged as critical states where this need should be met urgently," said P.K. Pradhan, Union health secretary.

Universal coverage of Janani Suraksha Yojana—a programme under NRHM aimed at reducing maternal deaths—has emerged as an important concern for the government. The survey showed that mothers availing of financial assistance under the scheme ranged between 14.6% in Jharkhand and 61.6% in Orissa. “The situation in Jharkhand and UP merits immediate action," said Gupta. “Earlier we knew that UP is performing poorly. Due to AHS (annual health survey), we know exactly where in UP to focus our attention..."

Some good news came from six districts—Purbi Singhbhum and Dhanbad in Jharkhand and Chamoli, Rudraprayag, Pithoragarh and Almora in Uttarakhand—that have already achieved the UN Millennium Development Goal (MDG) target of the infant mortality rate of 28 (per 1,000) set for 2015. Seven districts—Pithoragarh, Almora, Rudraprayag, Chamoli, Nainital and Bageshwar in Uttarakhand and Purbi Singhbhum in Jharkhand—have achieved the under-five mortality rate target of 42 (per 1,000). Also, in all the states surveyed except UP, at least half the children aged 12-23 months were fully immunized.

Government experts said while challenges persist, all the indicators have improved since the previous district-level health surveys (2007-08). “We have high hopes that India will meet the MDG targets...the sample registration survey has shown a sharp decline in infant mortality rate (IMR) in Rajasthan, Orissa, UP and Jharkhand. We can now focus on states where the IMR continues to be high and tackle them more efficiently," said Pradhan.

The sample registration survey was conducted in 2010 by the government to provide estimates of fertility and mortality rates in the country.