Congress president Rahul Gandhi upped the ante over farm distress and said if voted to power, his party would ensure a farm loan waiver in 2019 as well

New Delhi: Congress president Rahul Gandhi on Tuesday promised a nationwide waiver of farm loans if voted to power in the 2019 general elections which are less than six months away, accusing Prime Minister Narendra Modi of not “waiving a rupee of farmer’s loans in the last four years."

“We will not let the Prime Minister sleep till he announces a loan waiver," Gandhi told reporters outside Parliament.

Gandhi’s remarks come at a time when the Congress is on the back foot after the Supreme Court nixed its claims of corruption in the Rafale deal and the Delhi high court awarded a life sentence to Sajjan Kumar for his role in the rioting that led to the killing of 3,000 Sikhs in 1984.

At the same time, Gandhi’s promise to waive farm loans is likely to build pressure on the centre and other political parties, given that they possess fewer options to douse farmer anger ahead of the 2019 elections. More so, recently announced central schemes promising 50% returns to farmers over costs (PM-AASHA) have failed as crop prices have collapsed in the aftermath of bumper harvests.

Gandhi’s statement comes close on the heels of the Congress defeating the Bharatiya Janata Party (BJP) in recently held assembly elections in Madhya Pradesh, Chhattisgarh and Rajasthan where a combination of factors like farm distress and anti-incumbency went in its favour. In these three states the Congress promised a waiver of crop loans of up to ₹ 2 lakh per farmer. On Monday, the newly elected Chhattisgarh and Madhya Pradesh chief ministers signed off on the waiver within hours of taking oath. 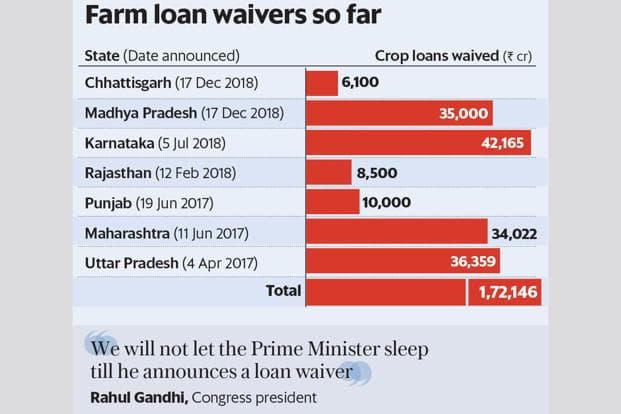 The waiver will cost the state exchequer an estimated ₹ 6,100 crore in Chhattisgarh and between ₹ 35,000 crore and ₹ 38,000 crore in Madhya Pradesh, according to officials. Since last year, farmer organizations have persistently urged the government to waive loans and announce more remunerative prices, following a deflation in wholesale crop prices which led to a dip in rural incomes and increased debts.

“The competitive populism to waive farm loans is nothing but a race to bottom," said Ashok Gulati, agriculture chair professor at the Indian Council for Research on International Economic Relations in Delhi. “The promise of debt relief is an atonement of political parties for ignoring the agriculture sector for long. The first kick in this direction was made by none other than the Prime Minister himself before the Uttar Pradesh elections (in 2017). Learning the electoral benefits, Congress is trying to score the final goal now."

Gulati added that loan waivers not only create a moral hazard—tending to reward the defaulter—but are also inequitable as they benefit richer farmers linked to formal credit. “A loan waiver at the national level may cost anywhere between ₹ 4-5 trillion and investments in agriculture will surely take a hit. A direct income transfer scheme funded equally by the state and centre is a better solution to provide immediate relief to farmers," Gulati said.

Farmer organizations said the wave of debt relief promises is a result of the growing agitation by farmers. “The latest round of election results show that BJP cannot take our demands for granted. Also the Congress cannot afford to be complacent and have to roll out its waivers so that it does not exclude deserving farmers," said V.M. Singh, convener of the All India Kisan Sangharsh Coordination Committee, an umbrella body of over 200 farmers unions across India.

Since last year, waivers have been announced by several state governments, including Uttar Pradesh, Maharashtra, Punjab, Karnataka and Rajasthan. The last nationwide waiver was implemented by the previous Congress-led United Progressive Alliance government in 2008, ahead of the general elections a year later. It cost the centre ₹ 52,000 crore and took almost four years to complete.

“It is crucial to sensibly design waiver schemes. The 2008 waiver benefitted more farmers in Kerala than in Maharashtra since the former had better land records though farmers in the latter were more distressed," said R. Ramakumar, professor at Tata Institute of Social Sciences, Mumbai.

Pledge to waive loans may build pressure on NDA, which has few options to douse farmer anger before polls