For private FM radio and news channels, the limit has been capped at 26%, up from 20%. However, it has reduced limit for local cable operators from 49% to 26%.

Analysts said the recommendations, if accepted, will pave the way for media baron Rupert Murdoch to increase his stake in Tata Sky. Uday Shankar, chief executive of Star India Network, and Tata Sky executives declined comment. Airtel DTH did not want to speak on the matter either. 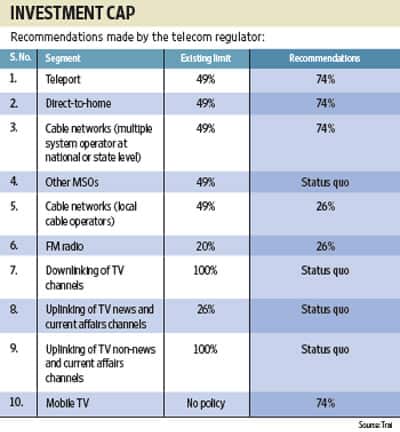 In the cable TV sector, MSO Alliance president Ashok Mansukhani has welcomed the move, but the 60,000-strong local cable operator community is upset. MSO Alliance is a lobby group for cable TV distributors.

“The regulator is favouring large corporate houses over local entrepreneurs. It is promoting the businesses of telcos and DTH players who will buy out the local cable networks," said Roop Sharma, an independent cable operator in New Delhi, who is also the president of the Cable Operators Federation of India. “The recommendation will kill the industry."

Large cable TV distribution firms, meanwhile, view it as a step towards digitization.

“It will speed up digitalization of the industry, which requires thousands of crores for the purpose. The money can only come from IPOs (initial public offerings) or increased foreign investment," said Mansukhani.

Private FM radio operators are not happy with the 26% cap.

“Trai should have maintained the 49%, cap recommended in April 2008. The government should take FM radio seriously," said Keerthivasan.

Mint is published by HT Media Ltd, which owns the firm that operates Fever 104 FM.

Radio Mirchi CEO Prashant Pandey, however, said there are other issues plaguing the sector. “Unless they are resolved and the sector becomes profitable, no investor—foreign or Indian—will look at radio," he said.

News TV broadcasters are also disappointed as they had expected the overseas investment limit cap to be hiked to 49%.

“It is impossible to make enough revenue, which in turn affects the quality of content," he said. Only the top two or three news channels in India are currently profitable.