Thanks for Visiting Mint
You seem to have an Ad Blocker on. Please turn it off in order to continue, or whitelist Mint
HOW TO TURN OFF AD BLOCKER
OR
REFRESH IF YOU ALREADY TURNED OFF THE AD BLOCKER
Home >Politics >Law threatens low-cost private schools

Hyderabad: In a small hamlet in Andhra Pradesh’s Ghatkesar district, 20km from Hyderabad, Indus Academy is one of four schools offering private education for the poor. Run by Career Launcher India Ltd’s foundation, its three single-storey buildings house around 40 children in the age group of 4-10.

The walls of the school are festooned with bright-coloured pictures, and the school boasts a laptop, a television, a DVD player and plentiful study materials. But the appearance of prosperity can be deceiving. Charging as it does a student fee of less than Rs200 a month, Career Launcher is planning intensive door-to-door canvassing next year to enroll an additional 60 students—at least to recoup its Rs1.5 lakh investment on its educational tools.

At the same time, three other groups are furiously developing a chain of affordable private schools, or non-government schools for poor families, in and around Hyderabad. The corporate race, which started two years ago, includes microfinance firm SKS Microfinance Ltd, a Singaporean private investor, India’s No. 2 drug maker Dr Reddy’s Laboratories Ltd, and local entrepreneurs. 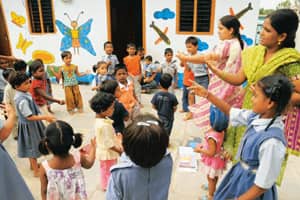 Even as these entrepreneurs search for low-cost teacher training and curriculum improvements to add “high quality" to the “affordable" label, the Right to Education (RTE) Act of April 2010, which seeks to ensure primary education for all 6-14-year-olds, threatens to fracture their efforts.

This law requires all schools to be government-recognized—a bribe-ridden and expensive process, costing at least Rs50,000 per school, according to school operators and policy advocates. The law also mandates higher teacher salaries. Last week, amid increasing pressure from states, Union human resource minister Kapil Sibal signalled that a committee would work on exempting poor schools from some requirements.

“We are readying for a big confrontation," says Parth Shah, president of the Centre for Civil Society, a Delhi-based policy advocacy. “Politically, the government will find it hard to close down affordable private schools. But people may have to pay higher bribes to meet higher infrastructure standards, pumping up fees and pricing out the poor."

Andhra Pradesh is known to have 18,000 such schools, according to a yet-to-be published budget schools rating report by Gurgaon-based Micro-Credit Ratings International Ltd (M-CRIL). The pilot study of 35 schools, which offers a sort of report card for parents and financiers, signals better reading skills in students attending poor-private schools but abysmal arithmetic capabilities compared with the average student’s performance in Hyderabad.

To support better education, funding agencies such as the Michael and Susan Dell Foundation (MSDF) are offering computer-aided materials and financing the training of a few schoolteachers in Hyderabad and Bangalore. What will be key for these schools is whether they can continue upgrading themselves without grant money or fee increases. 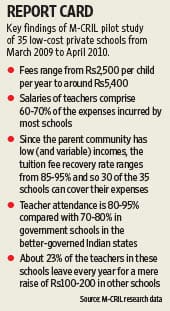 But James Tooley, a British academic known for his groundbreaking 2006 study on budget private schools catalyzed by his observations in Hyderabad’s slums, believes he has an inexpensive polish for a shiny pedagogy.

After nearly a decade of observing these schools under the microscope, Tooley, a professor of education policy at the Newcastle University, stepped under the lens himself last year. He set up Empathy Learning Systems, a chain of 12 low-cost schools, investing Rs65 lakh along with Mohammed Anwar, an education entrepreneur featured in The Beautiful Tree, Tooley’s 2009 book on poor-private schools.

The monthly salaries of private budget-school teachers are in the Rs1,500-4,000 range, only 10-20% of government school salaries. Many private-school instructors thus switch jobs even for Rs100-200 increments, says the M-CRIL report. But teacher salaries are often the largest chunk of these schools’ expenses; keeping salaries low keeps fees low.

At Empathy’s schools, detailed lesson plans are used to combat higher teacher turnover, so that new teachers can immediately fill in the shoes of their predecessors.

“A low-cost teacher training model ensures that you are not investing in instructors so much that the whole system collapses when they leave," says Tooley, whose current business interests have not diluted his reputation as a researcher.

Empathy’s teaching tools and training are also offered at a monthly charge of Rs15, to teachers from the 22 competing schools in the business. This reduces its dependency on school fees, which are often paid erratically due to the irregular salaries of parents.

As Anwar and Tooley look to increasing their school count next year to 15, by providing curriculum and training to 50 schools they might break even. But there’s pressure to squeeze rates even further. For teachers such as Ayub Shad of Jawahar High School, located a stone’s throw away from Hyderabad’s historical mosque Charminar, even the Rs15 rate is a tad unaffordable. Cost challenge: Students at the Career Launcher-operated Indus Academy in Ghatkesar near Hyderabad. Over the last decade, the number of such private schools has risen to 75,000, according to a study. Bharath Sai / Mint

While the parties refuse to clarify the reasons for their split, one thing is clear—the competition is intensifying. Dr Reddy’s Foundation is the latest entrant, with four Pudami—“earth" in Telugu—neighbourhood schools in and around Hyderabad, catering to around 1,000 children.

The hope is that an aggregation of dispersed poor private schools into a chain run by a single management will ultimately shrink tariffs of teachers and curriculum providers, as vendors need to knock on fewer doors. But the RTE Act, with its mandate for playgrounds and kitchens in schools, may yet put the brakes on this revolution.

“These businesses are striving to provide world-class education through a sustainable model, which like microfinance is not dependent on charity," says Gurcharan Das, chairman of SKS Educational Society. “The threat from the government to close down these schools persists. How can a school in the slum have a football-field-sized playground and pay minimum salaries of Rs20,000? If they had to pay such salaries, the fees would go up fourfold."

Prashant Nanda in New Delhi contributed to this story.