India is not the most dangerous country for women, data shows

But a Mint analysis of data from demographic and health surveys (DHS) conducted across developing nations of the world shows that the incidence of sexual violence reported by women is lower in India than in most other countries for which such data is available. And the incidence of such violence has declined over time.

Of the 43 countries for which recent data on sexual violence is available, India ranks 32 when it comes to the share of women aged 15-49 who ever experienced such violence in their lifetime. These 43 countries are those for which the last DHS survey was conducted on or after 2010.(See Chart 1) The DHS surveys are conducted periodically by the respective governments of these countries with funding from the United States Agency for International Development and UN agencies, are based on large nationally representative samples, and are considered to be the official source of data on health, nutrition and status of women for the respective nations. In India, the DHS is known as the National Family Health Survey (NFHS), which interviewed more than 700,000 women in 2015-16 during the last round of the survey.

When it comes to the proportion of women who faced sexual violence in the year preceding the survey, India ranks a middle-of-the-pack 21 among the 43 countries for which recent data is available.

Thus, there seems to be a dissonance between the perception about India, as recorded by the Thomson Reuters Foundation poll of around 550 global experts, and the actual experiences of millions of women across the world, as recorded by the DHS surveys. While it is possible that the DHS surveys underestimate the true extent of sexual violence faced by women, there is little reason to believe that the bias, if it indeed exists, is higher for India than for other countries. While the risk of sexual violence in India is undeniable, India does not seem to be the most dangerous place when it comes to the risk of sexual violence. The silver lining in the data is that the actual incidence of sexual violence, as recorded by NFHS, has declined over the past decade even as the reporting of sexual assaults has risen. (See Charts 3A and 3B) 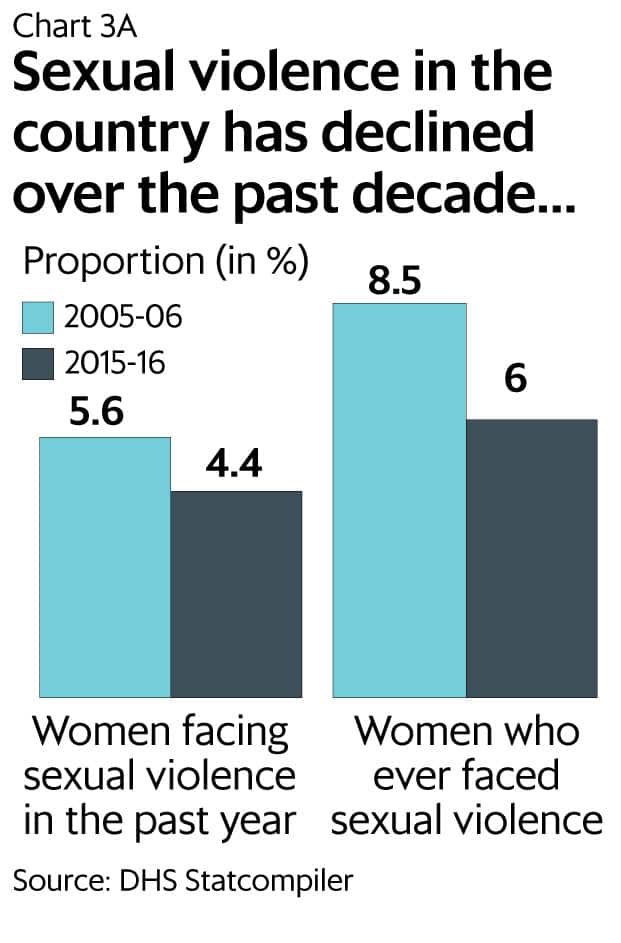 The rise in reported rates of sexual violence has been particularly sharp after the infamous Delhi gang rape of 2012, which led to increased attention on this issue.

It is likely that the increased reporting of sexual violence in the country over the past few years has coloured the perception of the global experts surveyed by Thomson Reuters Foundation.