Some 2.25 million Malayalees migrated to foreign shores in 2016, a drop of 154,320 from 2014, according to a draft survey by the Centre for Development Studies

Bengaluru: Fewer people from Kerala moved overseas for work last year than in 2014, demonstrating a fundamental shift in an almost 50-year-old migration pattern set by the southern state.

Some 2.25 million Malayalees migrated to foreign shores in 2016, a drop of 154,320 from 2014, when the last survey was done, according to the early draft of a survey conducted by Thiruvananthapuram-based think tank Centre for Development Studies (CDS).

This is the first time the number has declined since CDS started doing the migration survey in 1998, marking a departure from the significant yearly increases in the number of migrants from the state. 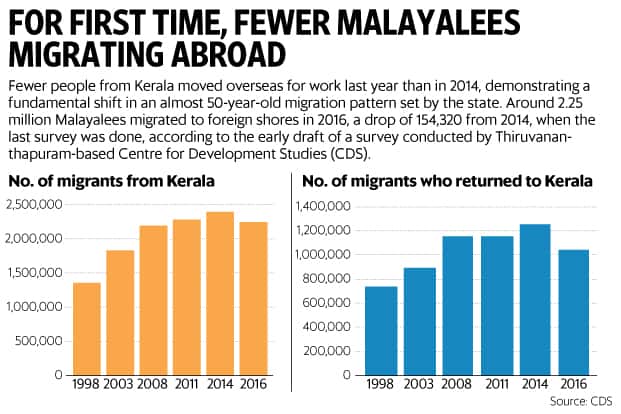 The results may be worrying for a state that receives an estimated Rs1 trillion in remittances every year from Malayalees working overseas, mainly in oil-rich West Asian countries like Saudi Arabia or the United Arab Emirates.

About 10% of Kerala’s 30 million population lives abroad, and the remittances they send home make up almost a third of its net state domestic product. The remittances have played a big role in the state’s unusually high rankings on human development indices, which are on par with developed nations despite its considerable unemployment and a negligible industrial base.

Last year’s drop in crude oil prices followed by nationalization policies and austerity drives adopted by West Asian countries have hurt Kerala, Mint did a detailed analysis using proxy indicators and anecdotal evidence on the subject in May last year.

The CDS survey is the first detailed study to confirm the trend.

“The migration has been declining for sometime. We expect the remittances to decline likely by 10% going ahead every year," said Irudaya Rajan, a CDS economist who led the survey, in a phone interview. “In two months’ time we will present the full report. But we don’t expect the numbers to change much in the final estimate," he added.

According to Rajan, apart from the oil market turmoil, decline in wages and rising job insecurity, another reason has contributed to the waning enthusiasm of Malyalees to travel abroad.

Kerala is getting into a demographic bracket wherein men in the age group of 20-34, who were once willing to go to the Gulf to take up unskilled jobs, are now better educated and turning down blue-collar employment, said Rajan. An increase in the number of educated women going abroad to work hasn’t quite offset the trend.

CDS is one of the few agencies that track Kerala’s migration statistics; its annual surveys, funded by the governments at the Centre and the state, are taken as the basis of migration-related discussions in public policy undertakings such as economic reviews.

K.N. Harilal, an economist and a Kerala planning board member, said the government has been briefed about the survey’s findings and is looking into it.

“We don’t think it is going to be a situation of panic. Malyalees are fairly widespread not just in one particular country. But the global economy, as such, is not in a good position and we don’t expect a continuous increase for remittances now," Harilal said. “It is a serious problem, we should start thinking about it, and in the coming years we should be more prepared," he added.